Will Changes to V2X Rules Put Traffic Safety in the Slow Lane? 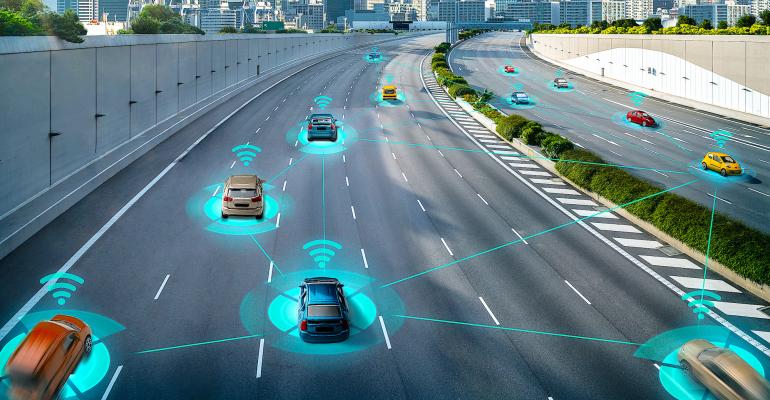 The FCC's move to pick a winner in the DSRC vs. C-V2X battle could slash the available bandwidth, according to Continental.

The U.S. government may be poised to constrict Vehicle to Everything (V2X) technology in a way that could halve the available bandwidth for safety applications such as emergency braking. That’s according to Continental Automotive Systems product manager for commercial vehicles and services Rich Alborn, who has authored a white paper on behalf of the company examining the issue.

“Everything,” in the V2X description, means that vehicles can communicate with other vehicles, with infrastructure, with pedestrians, and with the network.

Related: Keep An Eye on These 10 Global Lidar Vision Companies

The looming problem for V2X, as with Macintosh versus Windows, or CDMA versus GSM cellular networks, is one of compatibility. In the case of the 5.9 GHz radio spectrum that is designated for use for transportation telematics, there are competing specifications for the protocols that V2X systems will employ.

The contending standards are the WiFi-based Dedicated Short-Range Communication (DSRC) V2X and the Cellular-V2X (C-V2X) protocols. The IEEE specifies the DSRC standard with its IEEE 802.11p protocol, while the C-V2X standard is promulgated by the 3GPP, which has defined standards such as 3G, 4G LTE, and 5G for cellular networks.

DSRC was specifically engineered with low latency for automotive and transportation use. The range of the 5.9 GHz frequency is short but long enough to provide fair warning for cars to brake from highway speed to prevent collisions with stopped vehicles ahead. The V2X vehicles can relay messages to one another in a chain to form ad hoc networks as needed, Alborn explained.

C-V2X specifications are periodically updated as 3GPP extends its existing protocols, so those may be labeled LTE-V2X, 5G-V2X, or NR-V2X, he added. However, these rival specifications share the same narrow 75 MHz swath of frequencies in the 5.9 GHz range, and because they would interfere with each other at the same frequencies, each must stay in its lane to avoid jamming the other’s signal.

Here’s where the government appears to be contemplating a change that would constrict the frequency available for V2X applications in the U.S., according to Alborn. The FCC, which controls radio spectrum in the U.S. announced that it will eliminate DSRC in favor of C-V2X. But it is doing so without allocating C-V2X any additional bandwidth, leaving all V2X functions to run in the narrow 30 MHz lane of the 75 MHz data highway.

This data has value in terms of highway safety, so limiting will impede planned safety features. “V2X communication technology will vastly improve road safety and efficiency by allowing smart cars to share data directly between vehicles to assist with functions such as accident avoidance,” Alborn said. “The simple communication of GPS data can already provide some visibility in an otherwise “blind” intersection. And, since modern vehicles understand quite a lot about their environments, there is a huge potential for V2X to improve road safety by communicating that data.”

Shrinking the pipeline for that data will have negative results, Alborn asserts. “Having only this little sliver of spectrum available for V2X would unquestionably limit the growth and lifesaving capability of V2X technology, regardless of whether C-V2X or DSRC is used,” he concluded.

Industry players like Continental, and Ford, which has announced plans for V2X deployment in the next two years, will have to make their views heard if they consider the available remaining bandwidth insufficient for their planned services, so we will have to see what the FCC’s next move is as automotive OEMs and suppliers progress toward ubiquitous V2X deployment.