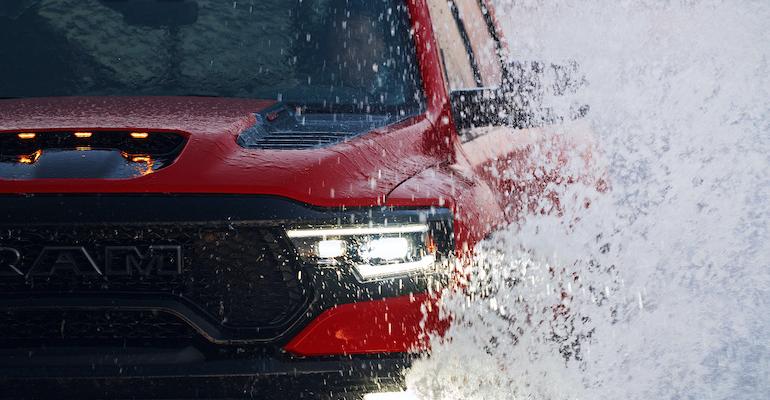 Start Slideshow ›
Ram TRX engineers say they set out to build the no-holds-barred fastest off-road truck in the world.

Watching Ford achieve impressive success with its F-150 Raptor desert driving weapon, Ram truck engineers peeked into their corporate arsenal to see what they could find to dethrone the reigning off-road champion.

Ford’s beast is powered by the company’s 3.5-liter Ecoboost turbocharged V6 engine. But Ram has access to the company’s stupendously powerful supercharged 6.2-liter Hemi V8 Hellcat engine developed by the SRT performance division and decided to deploy that against the Blue Oval target.

“The Ram 1500 TRX is the fastest production off-road truck in the world,” exclaimed Dan Stagner, vehicle integration lead. “The powertrain goal was to put everything we had into it. With the 6.2-liter supercharged Hemi engine, with the free-flowing exhaust, and a very large airflow induction system, we’re able to achieve 702 horsepower and 32 inches of water fording depth.”

The Hemi not only outguns the Ecoboost’s 450 horsepower; it also sounds better doing it. V6 engines inherently produce a less pleasing exhaust note and installing turbocharger impellers in the exhaust stream does not help the cause.

The Hemi V8 sounds great, and the belt-driven supercharger does not affect the exhaust sounds. However, there is such a thing as too much of a good thing, Ram engineers learned.

“What I’m most proud of is the way it sounds,” Stagner said. “We set out to create an exhaust system that gave you instant feedback from the accelerator pedal to the driver’s ear.”

That’s a worthy goal, but the first try overachieved, he reported. “We took it a little bit too far initially,” admitted Stagner. “It sounded like it was gonna rip your face off. We backed it down, and realized that we both achieved a very throaty exhaust as well as a comfortable ride down the highway.”

The team faced a similar challenge in tuning the TRX’s suspension for both off-road capability and on-road comfort. But in this case, sophisticated Bilstein adaptive dampers and advanced computers and control software have yielded a best-of-both solution, boasts Ram chief engineer, Jeff Roselli.

“The thing about the system is: there are no trade-offs,” he said. “We can adjust constantly to anything that we are seeing, be it the accelerometer inputs or the wheel position, in order to either tie the vehicle down if you’ve chosen sport mode or free it up if you chose Baja mode.”

That means that the chassis is cashing the checks that the hyperactive engine is writing when the truck heads off-road. “We learned early on that [suspension] travel was king; 13 inches of front suspension travel, 14 inches of rear,” recalled Roselli

Knowing that and delivering it to customers turned out to be two very different things, however. “One of the very unique packaging challenges was coming up with a spring that fit against our pickup box, which has to maintain the standard Ram 1500 cargo volume, but also up tight against these massive Goodyear tires,” he explained.

“It put us into a really tight box for that spring. A lot of engineering hours went into packaging and making a spring like that. We found two suppliers in the world capable of making it. One of them [suspension supplier Rassini], we got into business with, in order to make a 23.6-inch-tall spring at free length. Absolutely massive,” he marveled.

The TRX has an independent front suspension system like most modern trucks. But at the rear, Ram employs a five-link coil suspension in place of the typical leaf springs. It is controlled by the aforementioned Bilstein adaptive damping shock absorbers. “You’ve got many modes to control it, but again, the goal is maximum off-road performance, but also giving the customer options on-road,” said Roselli.

“There is nothing more telling than being able to idle up the steepest, sandiest, lowest-traction grade that you can find,” he said. “Pull up to the very bottom of it, hammer down, and cruise up it as if there were no incline at all. The truck really does magical things like that. It just can’t be beat.”