NHTSA Finally Clears Advanced Headlights for the US 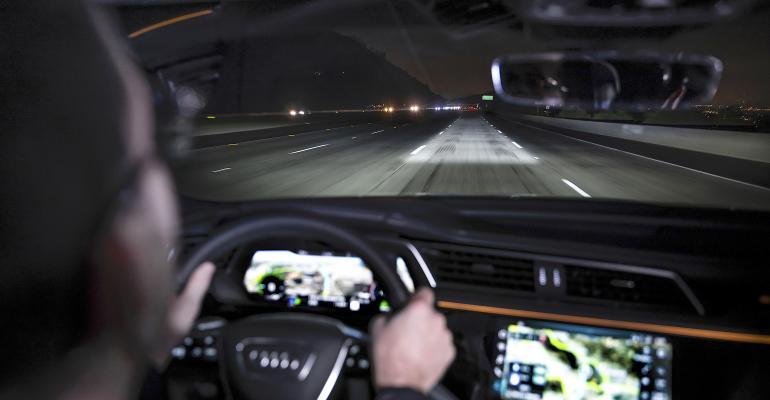 The U.S. National Highway Traffic Safety Administration has approved the use of advanced adaptive lighting technology for automotive headlights on U.S. roads, after years of petitioning by carmakers.

The lights have been used for cars in other countries for at least three years and those companies have aggressively courted U.S. regulators with demonstrations to show the benefits. Despite the apparent foot-dragging by NHTSA, the agency’s announcement boasts of the fact that they issued the approval ahead of the legal requirement to do so that was inserted into last year’s infrastructure bill.

The release notes: Adaptive driving beam headlight systems, or ADB, use automatic headlight beam switching technology to shine less light on occupied areas of the road and more light on unoccupied areas. The adaptive beam is particularly useful for distance illumination of pedestrians, animals, and objects without reducing the visibility of drivers in other vehicles.

“NHTSA prioritizes the safety of everyone on our nation’s roads, whether they are inside or outside a vehicle. New technologies can help advance that mission,” said Dr. Steven Cliff, NHTSA’s Deputy Administrator. “NHTSA is issuing this final rule to help improve safety and protect vulnerable road users.”

"Essentially adaptive driving beams allow high beam levels of visibility while shielding oncoming and followed drivers from additional glare," explained Jennifer Stockburger, Director of Operations for the Consumer Reports Auto Test Center. To do this, the lights produce high-beam levels of light at all times, but they detect oncoming vehicles and carve out a dim spot in the light pattern that shields the drivers of those cars. Additionally, these lights can identify pedestrians and cyclists and spotlight them with a shaft of light to help ensure the driver sees them.

"The recent announcement for the adaptive driving beam technology is an illustration of the importance of safety regulations keeping pace with the latest technologies,” Stockberger continued. “In particular, when the technology is already developed and provides proven potential safety benefits, regulation should allow it to get to consumers as soon as possible"

Companies like Audi that have been selling cars that have the necessary hardware for these adaptable lights will now be able to activate it through software updates, according to Audi spokesman Mark Dahncke.