McLaren Launches its Next Generation of Supercars with the Artura 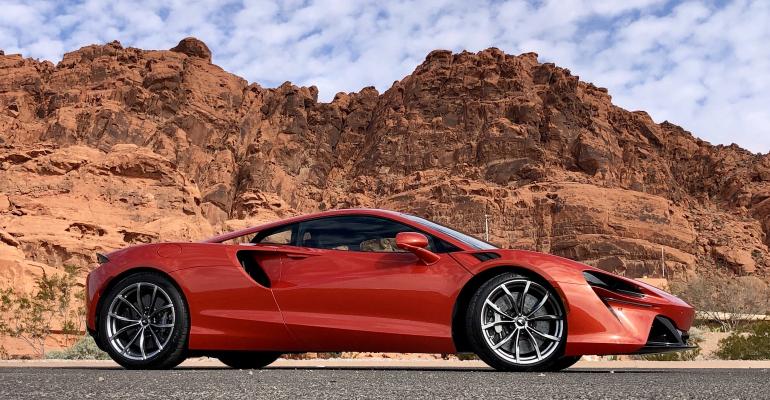 After a decade of building a matrix of models that have all been based on the same carbon fiber foundation (one that came in two variations), powered by the variations of the same twin-turbocharged V8 engine, propelled by the same 7-speed dual-clutch transmission, the new Artura reveals what McLaren’s engineering staff has been doing during that time.

That’s because, in addition to the new chassis, new 120-degree twin-turbocharged 3.0-liter V6 combustion engine, and new 8-speed dual-clutch transmission, the Artura also carries a 94-horsepower, 166 lb.-ft. electric motor and a battery that will propel the car 11 miles using only electrons according to the EPA. Or, it will go a much shorter distance if you choose to test the 81 mph electric-only top speed.

The electric motor flattens the engine’s torque delivery, providing strong acceleration out of corners with enough force that it is easy to slide the Artura’s rear (or induce its stability control system) during laps at Las Vegas Motor Speedway.

Related: The McLaren Elva Eschews the Unnecessary in Pursuit of Lightness

McLaren’s M840 V8 engine never sang with the lyrical voice of its Italian rivals, so the move to the M630 turbocharged V6 presented the opportunity for a slightly more inspiring exhaust note than the previous utilitarian tune, which the Artura delivers thoughtfully. Dialed to track mode and driven hard, the Artura sounds the part. But it can also creep out of your neighborhood at o’dark-thirty.

McLaren has preserved its electrically driven hydraulic power steering to maintain the excellent steering feel provided by the arrangement and it has added an electric-powered HVAC system to ensure occupant comfort no matter whether the combustion engine is running or not.

The use of conventional electronically controlled shock absorbers rather than the innovative Proactive Chassis Control cross-linked hydraulic system that works miracles on its higher-end models (and on the Rivian R1T and R1S) means that you get what you’d expect: a harsher ride, especially in Sport and Track driving modes. But even Comfort mode falls short of the comfort provided by the Proactive Chassis Control system.

Technology contributes to the Artura’s inspiring styling, as high-temperature superformed aluminum sheet metal has crisper lines and incorporates what would otherwise be multiple sections into single pieces. “Superformed aluminum bodywork allows crisp door lines and the one-piece clamshell rear,” said chief engineer Geoff Grose. “There are fewer panels on the car, which is good for design and weight.”

Speaking of weight, even with the hybrid drivetrain, the Artura weighs a surprisingly light 3,303 lbs. That’s partly because the V6 engine weighs 110 lbs. less than the old V8.

As ever when wheeling a McLaren, driving the Artura is a visceral experience thanks to the car’s eye-opening performance, responsive steering, and confidence-boosting brakes. Even the Nevada desert is unsuitable for experiencing the Artura’s 205-mph top speed, so we limited our high-performance driving to the race track, where the Artura showed itself to be the partner a driver wants, with the ability to easily induce sliding at the rear and to control that slide.

But maybe the best thing about the Artura is that it is only the debut model for so many promising new technologies. We can’t wait to see future iterations of this new matrix of parts.