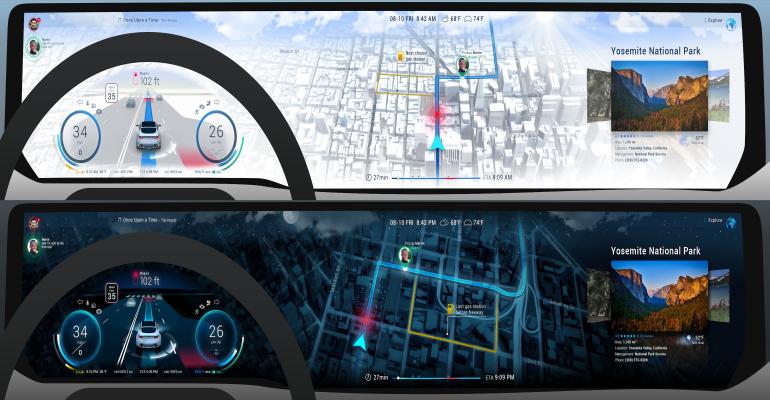 The companies pool their talents to show what is possible for state-of-the-art real-time 3D navigation.

The partners are showcasing a proof-of-concept prototype system that displays the potential of their proposed infotainment system. It is built on Unity’s 3D platform running on a Qualcomm Snapdragon processor and uses Here’s 3D map data to illustrate the concept of a wide-screen 3D map of San Francisco, which is only one of 70 major cities Here has mapped worldwide.

The goal is to provide drivers with the improved comprehension that comes from having a 3D representation of data rather than the familiar flat 2D version. “While 2D will definitely get you from A to B, the reason that 3D technology is relevant and appealing to users is that it is much closer to reality and what you would experience on the latest smartphone,” Zhai said. “3D is the obvious next step in terms of a seamless mixture of technology and the real world.”

To do that, a system needs to be able to manipulate 3D imagery in real time, and it needs to have access to appropriate 3D data, which is why the two companies have come together.

“Here is able to bring their dataset (or mapping) of 70 global cities to life in real-time 3D using Unity,” Zhai explained. “That enables the engagement of maps to change into something that operates in real-time, rather than as an abstract representation of the world it is navigating.”

The companies are also looking toward a future when cars will drive themselves and occupants will be looking for ways to pass the time. “It opens up time like never before for the driver to interact with their smart devices whether that’s using augmented reality in a car or playing games on your vehicle’s screens,” he said.

Here has corporate ties to important companies who are its owners. The list comprises Mercedes-Benz AG, BMW AG, Audi AG, Mitsubishi Corporation, NTT, Intel Capital, Bosch, Continental, and Pioneer, so there are ready prospective customers for this technology.