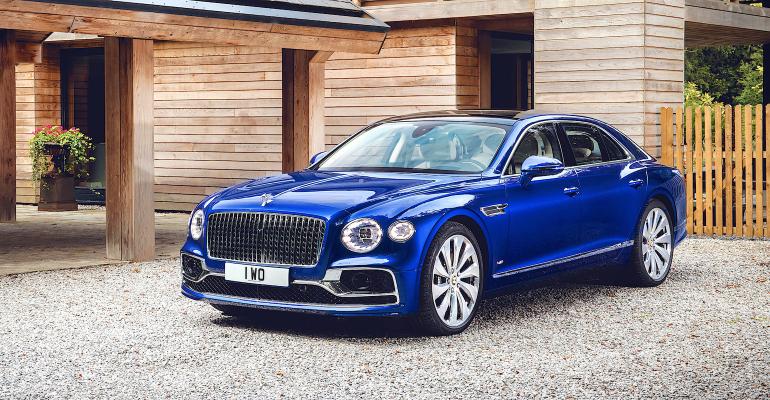 The posh Greenbrier resort in White Sulphur Springs, W. Va. Was known both for its opulence and for hosting a subterranean bunker that was to have housed the U.S. Congress in the event of war.

But in recent years, some would-be guests found the Greenbrier’s formality to be stifling and as passe as its now-deactivated Cold War bunker. In response, the resort has expanded its offerings to include casual dining and a casino, which are hoped to freshen the Greenbrier’s stodgy image.

Bentley has suffered from a similar excess of heritage. While history, and a history of innovative engineering like the company’s long-running V8 engine, remain the cornerstones of Bentley’s appeal, the company seeks to ensure that they don’t become millstones, sinking its image.

This is the mission of the 2020 Bentley Flying Spur; to reestablish Bentley’s relevance to modern prestige car buyers. To be certain, the Spur retains the requisite pomp and circumstance that lends a sense of occasion to every trip behind the wheel. But our Flying Spur First Edition Blackline Specification wore fashionably black trim where a classic Bentley would have featured chrome. 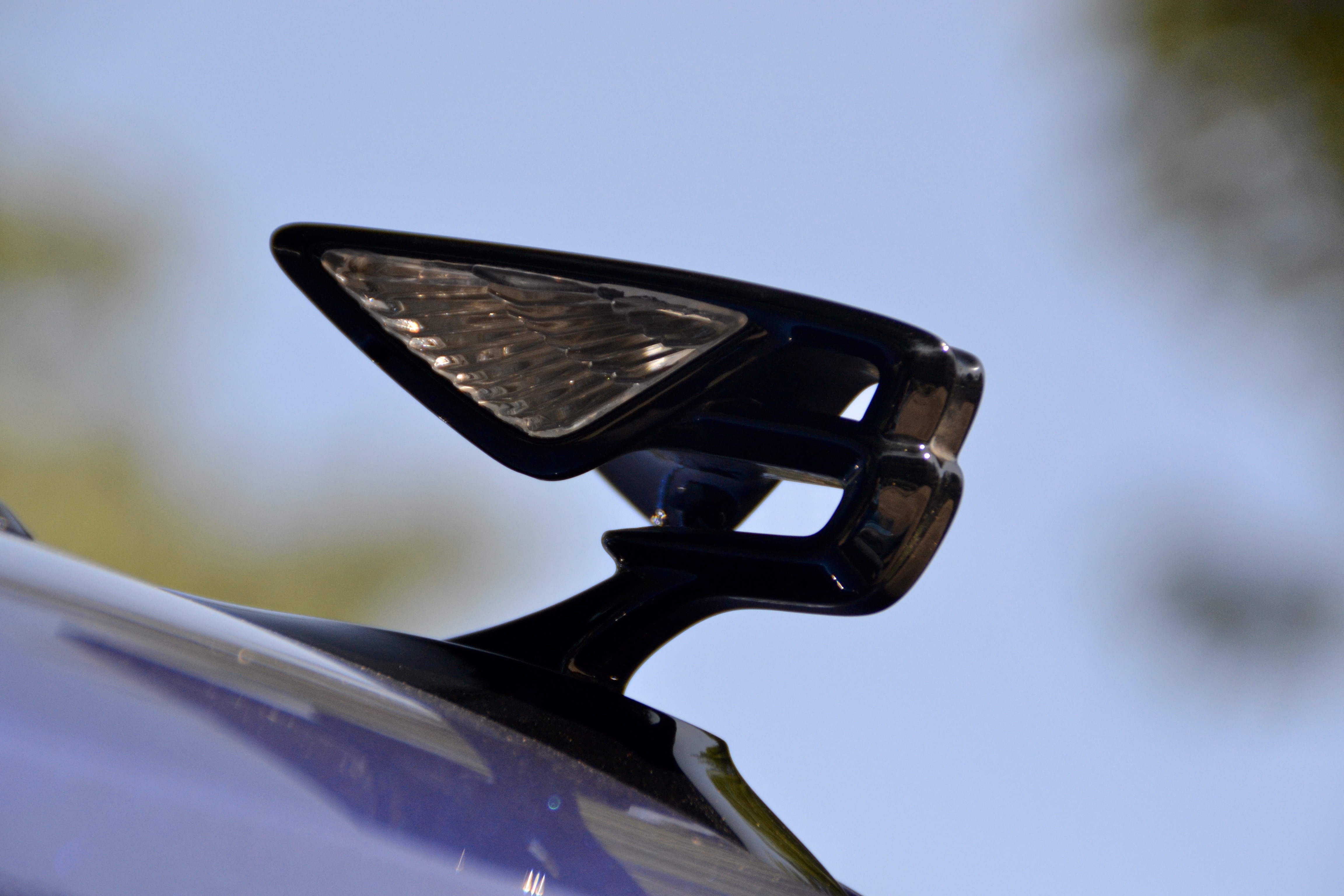 The Bentley Flying B hood ornament in Blackline trim finish.

But that is the central difference: the Flying Spur is meant to be driven rather than ridden in. The technology Bentley deployed to accomplish a “driver’s car” experience in a 6,600-lb., four-door, all-wheel-drive limousine propelled by a 626-horsepower, 6.0-liter, twin-turbocharged W12 engine achieves a minor miracle.

It starts with a four-wheel steering system that virtually shortens the Spur’s mammoth 125.75-inch wheelbase. But automatically steering the car’s rear wheels in synchronization with the fronts (which are still steered the old-fashioned way, by the driver) the car exhibits startlingly quick reflexes and even the ability to maneuver through exceptionally tight switchbacks and hairpins that might otherwise leave the driver contemplating a three-point turn.

Four-wheel steering isn’t a new technology, but Bentley’s invisible execution of the technology is new. The steering responds exactly as the driver would expect if they were driving a smaller car. Put on a VR headset displaying Bentley’s Continental coupe surrounding the driver and they’d surely feel it was an appropriate experience. 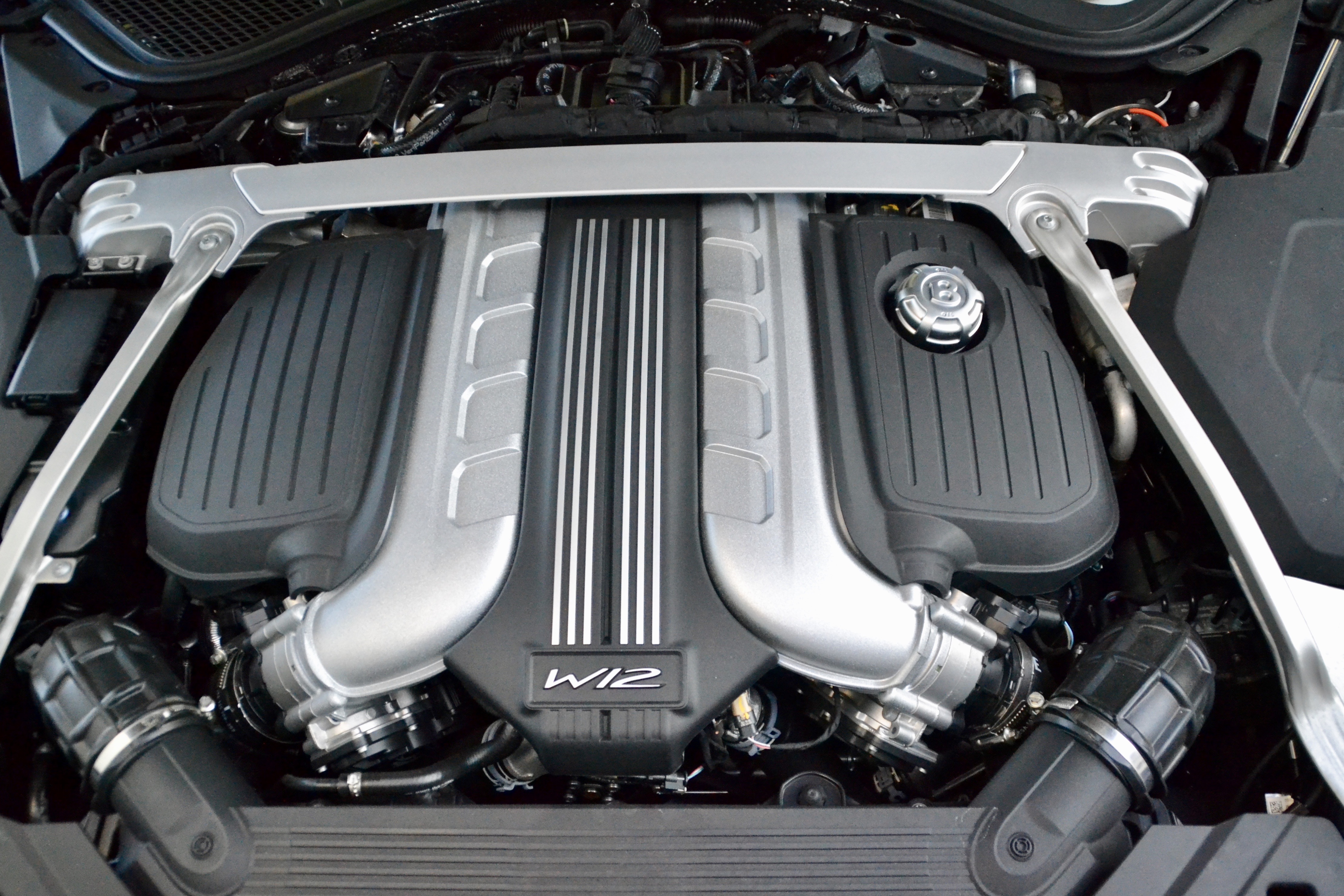 Indeed, Bentley’s chassis engineers insist that the big sedan is only fractionally slower and less responsive on a race track than the smaller coupe, though they couldn’t provide any data to quantify the difference.

Aiding in this accomplishment is the Flying Spur’s front and rear 48-volt active anti-rollbar system. Normal passive anti-rollbars tie the left and right side suspension together to minimize their difference as the car rolls to the side during corners. The active system goes further, by aggressively propping up the outside suspension so that the Spur can’t lean over much.

These systems require substantial torque, which is why Bentley’s system requires a 48-V power system rather than the standard 12-V electrics used in cars. There is also a new three-chamber air spring system, with 60 percent more air than the old model’s two-chamber air springs, for improved fine control of weight transfer.

The previous-generation edition of the Flying Spur struggled to deliver such a driving experience for a variety of reasons, all stemming from that car’s front-drive foundation. The new Flying Spur is a rear-drive car that has the ability to shift power to the front wheels when the rears slip, so it does not suffer from the understeer that is induced by power coursing through the front tires to the road.

The old car routed 40 percent of the engine’s torque to the front wheels, creating the understeer that is characteristic of front-drive cars. Also, that car’s engine was located far forward because of the front transaxle, which gave the car a heavy front weight bias.

The new Spur moves the front axle forward 5.1 inches and slides the engine back, giving the car vastly improved balance. It stops as well as it accelerates, thanks to monstrous 420 mm brake rotors, which are the largest iron brake rotors on any car in the world. This is good because the Flying Spur whooshes to 60 mph in just 3.7 seconds and reaches an astounding top speed of 207 mph. 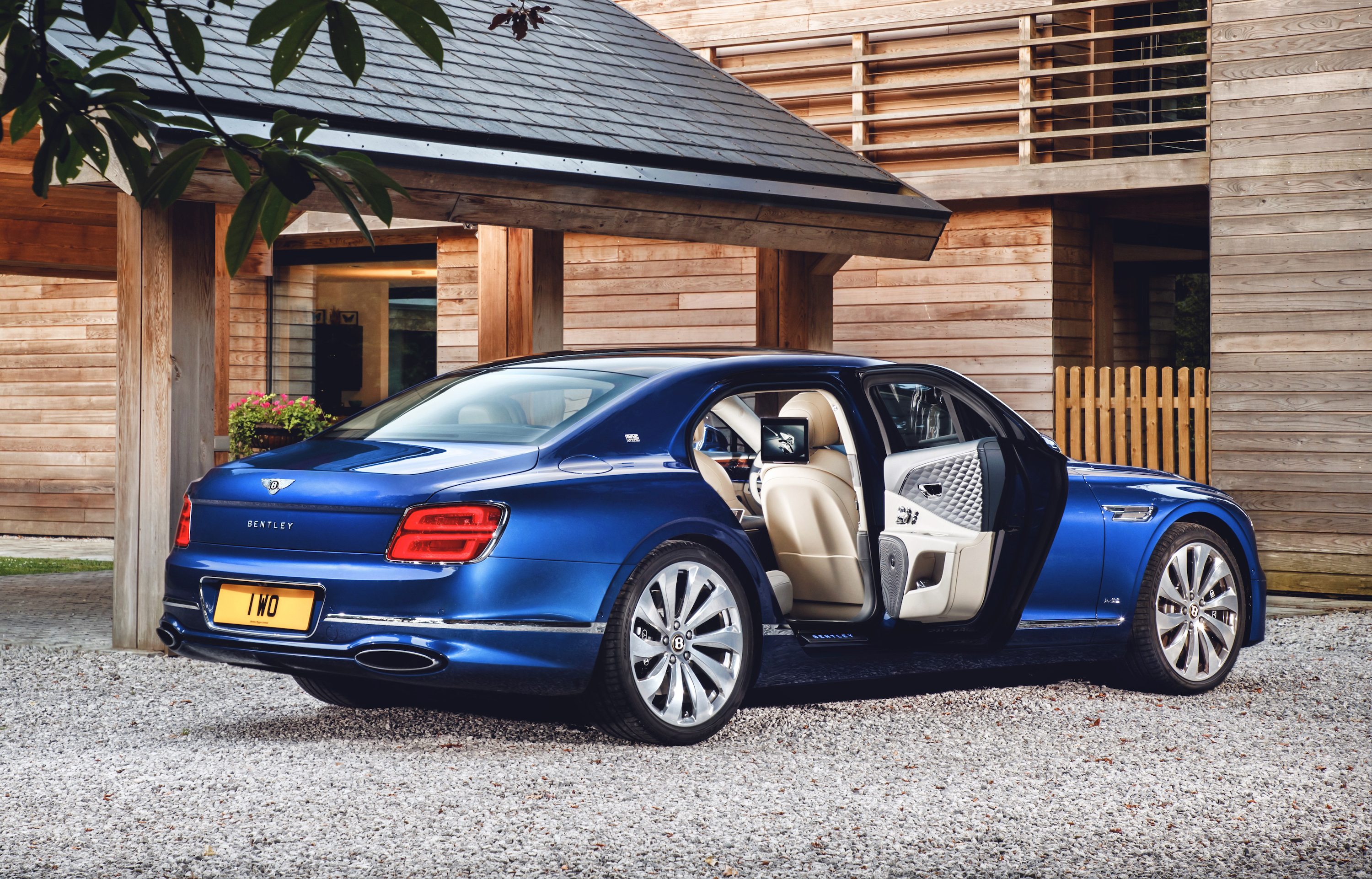 The Naim audio system packs an astounding 2,200 watts of amplification power blasting through 18 speakers and two active bass transducers that literally shake the car. At the sound system’s heart is a 21-channel amp with eight Digital Signal Processing sound modes.

Rear-seat passengers also have access to the built-in entertainment tablets that rest in the backs of the front seats. They provide access to the Bentley Multimedia System and connect to the Google Play media store. 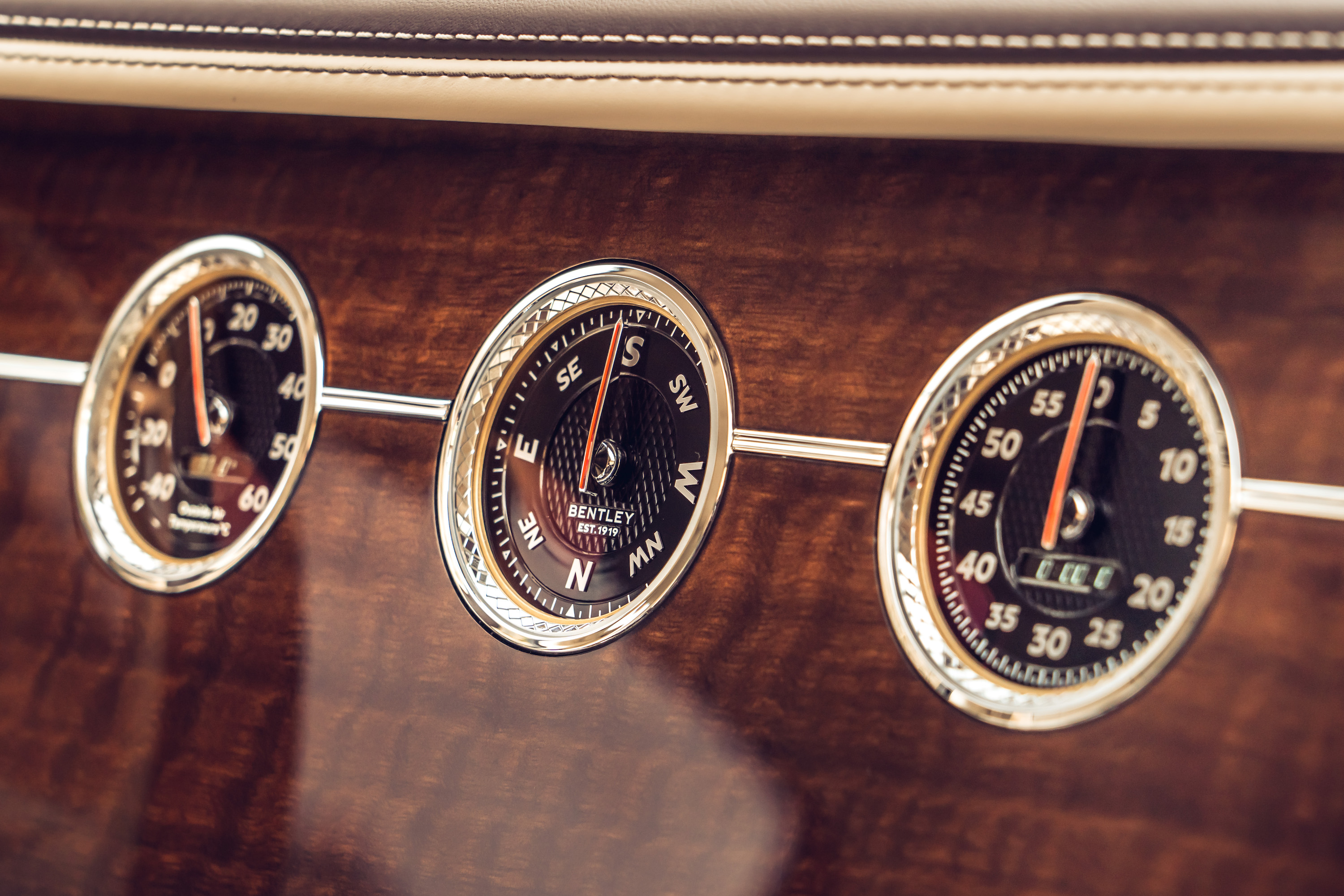 Perhaps Bentley’s greatest technical achievement in the Flying Spur, as in its Continental GT coupe sibling, is the recognition that what some drivers seek is the tranquility of the freedom from technology. That’s why Bentley includes the Bentley Rotating Display at the center of the Flying Spur’s dashboard. There is a 12.3-inch, high-definition touch-screen infotainment display providing drivers all the expected information about their entertainment choice or their navigational routing.

But for drivers who need a digital detox, Bentley blessedly provides the ability for the Rotating Display to roll from the infotainment screen to a gorgeous wood-trimmed dashboard with three analog instruments displaying the time, ambient temperature, and compass direction. If that’s too much information, the display rolls to a third side of plain wood, unblemished by either analog or digital displays.

This should provide a sufficiently placid environment for the driver to recuperate from whatever endeavor pays for the purchase of a gorgeous rolling sculpture with a base price of $214,600. Our Moroccan Blue Flying Spur First Edition featured Linen-colored interior leather with Brunel accents, while the wood veneer was Koa. The car rolled on optional 22-inch wheels as part of the $44,735 First Edition specification. The gloss black radiator grille is another $4,860, but its contribution to lending the car a contemporary air is priceless.

The final bottom line is $287,265. This might be a touch pricey in some driveways, but we can’t imagine a better way to travel to the rejuvenated Greenbrier resort. 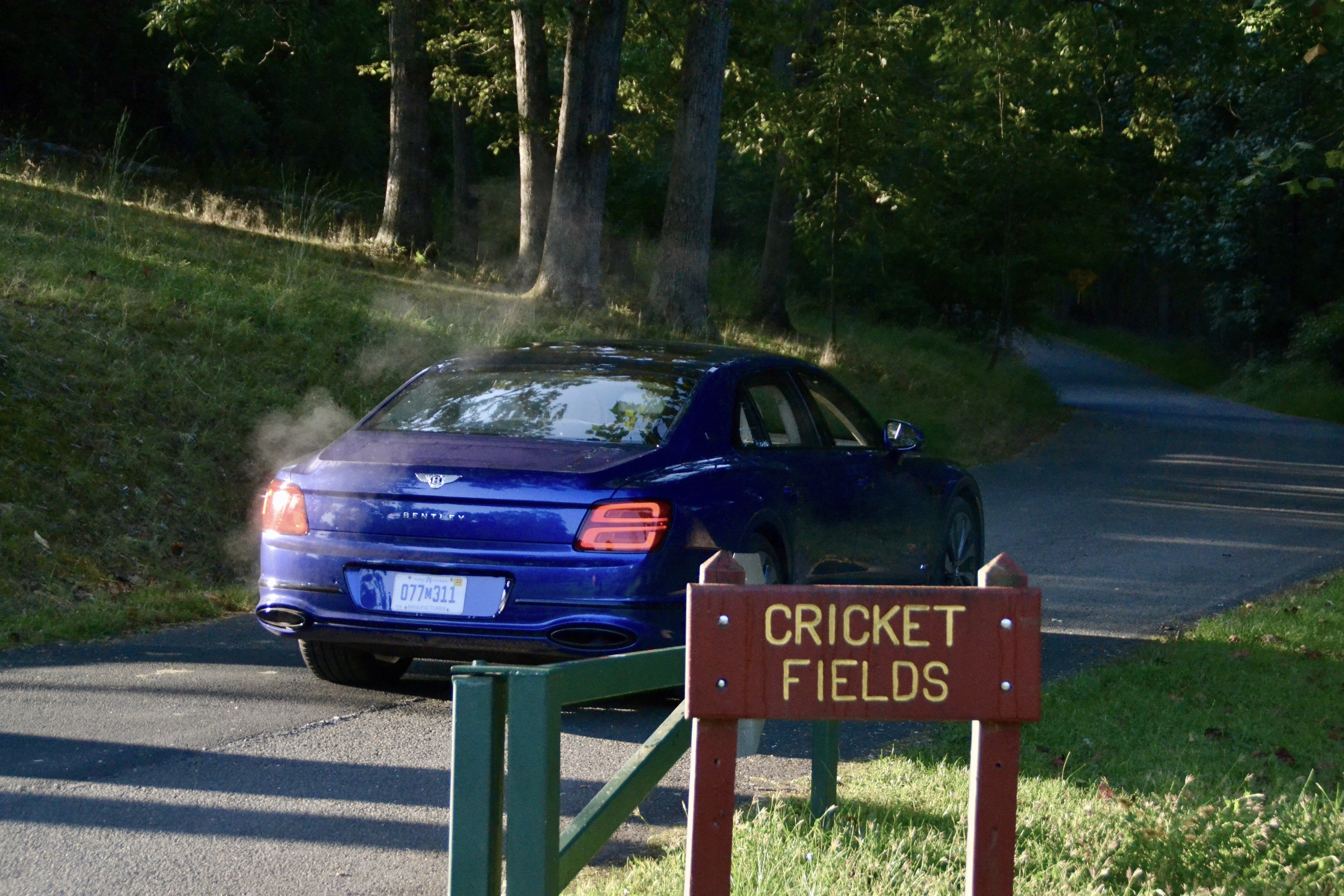