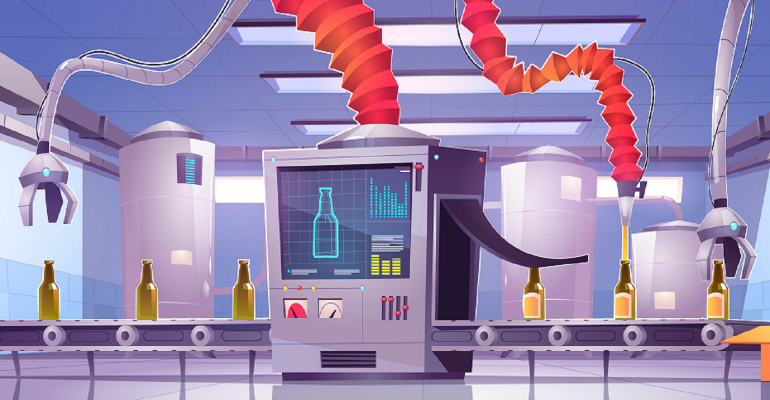 Long relegated to the packaging end of the food line, robots are now in the food processing business.

We all saw the images of meat-packing plants during the height of the pandemic. The Covid-19 virus was running rampant through the workers who were operating in dense groups. And we all thought, can’t robots do this?

Those who were managing the meatpacking factories were thinking the same thing. Their plants were shutting down because the virus was spreading and little could be done to effectively meet social distancing mandates. “Those companies came to us and asked, how can we do this with robots and make it economically viable?” said Mark Joppru, VP of robotics and automation at ABB.

ABB has been involved in food and beverage for years, especially in packaging operations. The company is now designing robots that can participate directly in food production.

ABB is now in discussions with several meat plants. “We discussed this with major beef processors. The top five or 10 meat processors are looking at adding robots,” said Joppru. “The poultry industry is further ahead on this.”

The Challenges of Robotics Food Processing

The difficulty of automating food production was formattable even before the pandemic. In an industry where production requires regular washdowns, how do you build a robot that can meet stringent sanitation measures? That means ruggedized cables, bearings, and stainless steel surfaces. Robots at the end of the line conducting packaging operations were well established, but robots messing with food? Not so much.

That’s changing in a world where automation can make a competitive difference. “In general, robots have not been involved in the food and beverage product-making applications,” said Joppru. “Robots have not been very tolerant of washdown environments. But that has changed rapidly, and we’re embracing this relatively new market. Food and beverage is a very important and developing area for robots.”

ABB is moving quickly into food production and other industries requiring hygienic or clean practices. The company is revamping its line of robots accordingly. “We’re launching six new robots over the next six years. These robots are designed for food and hygienic locations. They can go into a washdown that all food automation requires once per day,” said Joppru. “This involves preparing the arms, the cables, the end of arm tooling, and the grease in the knuckles to withstand that environment.”

Picking is critical in food and beverage, so ABB is turning to its pick-and-place robotics. “The Delta robot will be important in food and beverage. We have a hygienic version of our 1210 robot that will be released this year,” said Joppru. “We're making a hygienic robot designed for food production. We’re designing it from the ground up. It will be read in late 2021 or early 2022.”

Food and beverage is not the only industry that requires detailed hygienics for industrial equipment. “Two more industries that require hygienics are healthcare and pharma,” said Joppru. “We have an incubator for robot design at the Texas Medical Center in Houston where we’re testing robots for healthcare and pharma. Another application that requires robot cleanliness is the cleanroom for electronics. The cleanrooms must be free of dust or shedding grease.”

The challenge for making robots hygienic is not just on the robot manufacturers. The suppliers have to get in the act as well. “We collaborate with end effector companies. We have not designed our end effectors for this market yet. We do end-effectors, but not in this area,” said Joppru.”So we’re collaborating with end effector suppliers for these applications. Hygienics requires different end-of-arm tooling. Shunk and ATI are working with us.”

Suppliers that are designing equipment for food and beverage face the same hurdles as the robot manufacturers. “In some processes in food and beverage, the applications require robots that can handle flexible or variable items. You’re working with materials that are different from welding or metal or cardboard,” said Joppru. “The environment requires high temperatures, high humidity, and cleaning chemicals in the washdown. Caustic bleach in washdown may affect the durability of seals and cabling.”

One advantage when it comes to food and beverage is ABB’s recent acquisition of Dodge Bearing. “We have the benefit of working with a bearing manufacturer as part of our company,” said Joppru. “They have a full line of food-safe bearings, so we have the advantage of technology and teamwork. One of the largest bearing companies in food and beverage is our Dodge Bearing operation. That helps.”