HomeAutomationWant to See Nature Teach a Robot? These Underwater Drones Move Like Fish
Recent
Automation
Mercedes-Benz Sustaineer Concept Electric Van Scrubs the Air While it Drives
Oct 28, 2021
Spooky Halloween Tech Is Here. Just Look at These Doozies
Oct 27, 2021
Halloween? What a Perfect Time to Think About Generating Electricity From Blood!
Oct 27, 2021
Ghosts of Medtech: What Ever Happened to These 7 Medical Devices?
Oct 27, 2021
POLL
How to Survive a Zombie Apocalypse
Oct 27, 2021
America's Supply Chain Crisis by the Numbers
Oct 27, 2021
Want Scary Stuff for Halloween? Check out the Tech for 2021
Oct 27, 2021
How Apple Influenced Medical Packaging
Oct 27, 2021

Want to See Nature Teach a Robot? These Underwater Drones Move Like Fish 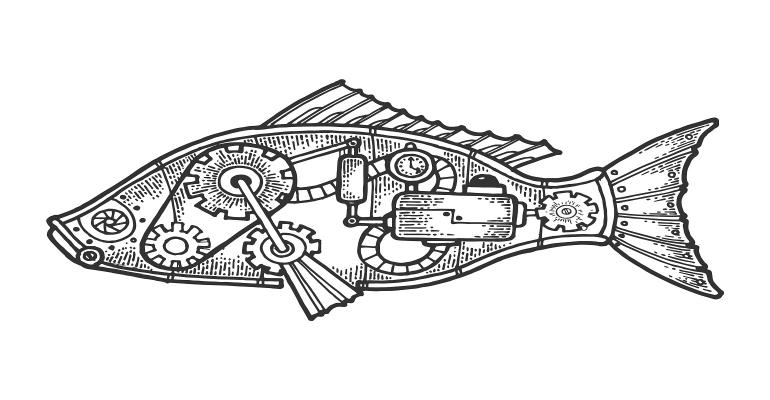 Researchers combine multiple disciplines to create a robot that can vary its speed, something difficult to attain in these types of machines.

Researchers have taken a major step forward in solving the problem of how to get underwater robots and vehicles to move at varying speeds, similar to how fish can swim with the same proficiency whether fast or slow.

A team at the University of Virginia School of Engineering and Applied Science has combined biomechanics, fluid dynamics, and robotics to create a programming model for how and why to tune the stiffness of a swimming robot’s tail to optimize its movement in regard to its speed.

Related: Want Your Robots to Swim? Feed Them Oil and Water

University of Virginia School of Engineering and Applied Science, Department of Mechanical and Aerospace Engineering

Researchers built a fishlike robot that uses a programmable artificial tendon to tune its own tail stiffness while swimming in a water channel based on a computer model they developed. The idea is to create a swimming robot that can swim at varying speeds without losing efficiency or effectiveness of movement.

Generally, robots that mimic fish only have a rigid tail, which significantly affects speed, explained Dan Quinn, an assistant professor at the University of Virginia School of Engineering and Applied Science.

“Having one tail stiffness is like having one gear ratio on a bike,” he said. “You’d only be efficient at one speed. It would be like biking through San Francisco with a fixed-gear bike; you’d be exhausted after just a few blocks.”

Indeed, changing the stiffness of its tail is primarily how a fish controls its movement in relation to its speed; however, it’s impossible to measure the ratio of stiffness to movement successfully on a swimming fish, Quinn said.

So researchers turned to science, creating a model from a series of theoretical mathematical-based measurements, he said. “Surprisingly,” Quinn said, “a simple result came out of all the math: Stiffness should increase with swimming speed squared.

The idea of the work is to eventually is to create an underwater drone that can travel fast to cover miles of ocean, but also be able to slow down to perform tasks like mapping a coral reef, or take measurements at the site of an oil spill, researchers said.

To test their theory, they built a fishlike robot that uses a programmable artificial tendon to tune its own tail stiffness while swimming in a water channel. What researchers discovered is that the robot could swim over a wider range of speeds while using almost half as much energy as the same robot with a fixed-stiffness tail, they reported.

“The improvement was really quite remarkable,” Quinn observed.

Researchers published a paper on their work in the journal Science Robotics. Overall, they said their work has helped uncover some of the mystery around how tail stiffness affects swimming performance.

Going forward, researchers plan to extend their model to other kinds of swimming. While they designed their first robot test model to swim like a tuna, they plan to explore robots based on a range of other swimming creatures from dolphins to tadpoles, and even the different types of motions that animals like stingrays make, Quinn said.

That work should keep them busy for a while, he said. “I don’t think we’ll run out of projects anytime soon,” Quinn observed. “Every aquatic animal we’ve looked at has given us new ideas about how to build better swimming robots. And there are plenty more fish in the sea.”