Future of Work Is Human/Machine Connection 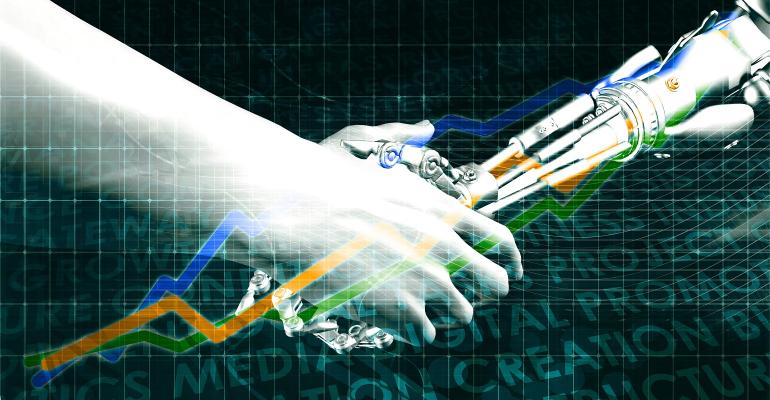 Going forward, the necessary skill set for workers will be an understanding of robots and automation.

Whether you’re working in factories, warehouses, stores, or hospitals, your future will involve machines. These machines won’t necessarily replace humans, but they will require a new way work working. The workforce won’t need high-level engineering capabilities, but familiarity with automation will be important.

The new skills industry will need from workers is the ability to direct with machines. “The workforce of tomorrow will be roboteers working together with robots to improve productivity,” Florian Pestoni, CEO of InOrbit, told Design News “In 2022, the company’s vision will include humans, robots, and AI working together can overcome our global challenges to positively impact the lives of billions.”

Related: How to Improve Robots' Social Skills for Interaction

Pestoni sees humans and robots working together as a logical next step in the future of work. “I look at the evolution of tools over the millennials. We used to dig with our hands. Early forefathers had strong nails. Then came the shovel that required your strength,” said Pestoni. “Then power tools arrived, but you still had to be strong and skilled. With robots, the tool is a lot smarter.”

As we move into 2022, the frequency of human/robot connections will increase. “We’ll see more partnering between robots and people. The beauty is that it democratizes labor. You don’t have to be strong. It can accommodate people with all kinds of abilities,” said Pestoni. “Also, you don’t need to be there physically. You can monitor robots from a distance, whether it’s one robot, 10, or 100. As a roboteer, you’re overseeing the work of robots and making sure they’re doing their job.”

The warehouse industry is in the middle of a major restructuring of work. Automation is on its way to most warehouses. “In a warehouse, there are still a lot of people picking and walking miles per day. We can eliminate much of it,” said Pestoni. “You don't need to have a Ph.D. in robots. You’re not writing code. You just need to be comfortable using technology. If you’re familiar with smartphones and video games, you already have the basic skills to work with robots.”

Working with robots has become much simpler with smart systems that need to be configured rather than programmed. “When you tell the robot what to do, you can think of it as programming, but it’s less involved than programming the robot or industrial robot with a PLC with detailed programming. This next generation of robots is smarter, so you can give more aspect instructions. There is this role of helping the robot get going, introducing the robot to its new home. That may require some updates like an annual checkup.”

Safety and the Workforce

In a setting the mixes people and machines, safety is always a factor. But who’s in charge of safety? “To some extent, we’re all responsible for safety. Safety is in everyone’s interest, from a moral perspective and an economic perspective,” said Pestoni. “You don't want accidents. There are some aspects of safety that only the robot manufacturer can do – like optical detection. You can use computer vision and other techniques to make sure you don’t bump into things. Emerging standards are also covering safety.”

Beyond the built-in safety provided by the robot manufacturer under standards, other players in the work environment contribute. “The system integrator is on-site getting a sense of where there is high traffic. You look at how you can set up the robot to avoid it if possible,” said Pestoni. “A warehouse with a restroom and sometimes has a line before lunch. You can anticipate that situation and have the robots avoid that area.”

In addition to site-based safety, the platform that controls the robots also has a role in safety. “With our platform, we have data. We can report on a near miss where two things came too close. Maybe it’s a robot and a person, a robot and a shelf, or two different robots. That data is super-valuable for continuously improving safety,” said Pestoni.

Today, e-commerce and warehouse centers are tripping over each other to automate more tasks. They can find enough people to do the automated job. In response, company leaders will ask incoming workers, ‘Would you like to join us to be the boss of a fleet of robots?’ “That sounds interesting for the next generation who are already tied to a screen,” said Pestoni.

Pestoni sees the machine/human connection expanding beyond the obvious workplaces of factories and warehouses. “Agriculture has become a great place for automation, and not just big ag,” said Pestoni. “Automation is more important for small independent farmers. You can create a farm that runs itself.”

Other industries are likely to follow suit. “I would bet on construction next. What agriculture and construction have in common is they’re physical. You can offload certain tasks to the robots,” said Pestoni. “We'll see the private space industry go beyond orbit. Robot missions to the moon, and setting up a space station will be done by robots. They can operate comfortably in a vacuum.”