HomeAutomationThe Fundamentals of AR and VR – and how the Military Is Using Them
Recent
Automation
Q&A With IndyCar Gearbox Expert Anna Chatten
May 13, 2022
Intel Unveils Trust Authority to Boost Security
May 13, 2022
Supplier News Looks at Highly Customizable Industrial Monitors
May 12, 2022
Here Technologies Maps are Key to Mercedes Level 3 Automation
May 12, 2022
POLL
'We Built the Domino's Pizza Tracker for Manufacturing'
May 12, 2022
Break Your Bubble Gum Habit by Watching Its Production
May 12, 2022
This Patch Monitors All Your Vitals, Including Blood Pressure
May 12, 2022
First E-Skin to Anticipate, Perceive Touch from All Directions
May 12, 2022 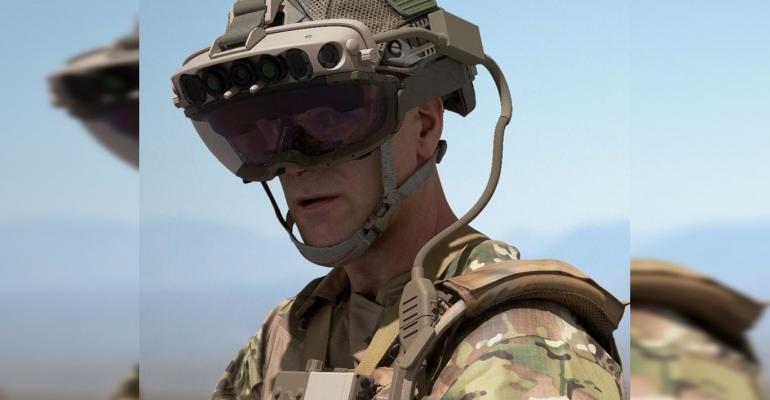 The military has long deployed augmented reality (AR) and virtual reality (VR) tools to train soldiers. Here are the fundamentals

Military operations across the world have long used AR and VR for equipment training, flight training, and weapons training. These tools can greatly reduce the cost of preparing soldiers to meet conditions that can’t be replicated in the real world outside of actual combat.

Emerging developments in AR and VR are having a major impact on military training. AR and VR developers are using technology to bring warfare concepts into reality. “The military sector has always been at the forefront of using emerging technological advancements for training and combat enhancements. Augmented reality is no exception,” said Michael Morozov founder and CEO of Jasoren, a VR software company producing AR tools, said in a report. “With the expanding possibilities of data and graphics processing, the number of uses of augmented reality in the military grows exponentially.”

With TAR, all the crucial information – spatial orientation data and weapons targeting – is superimposed onto the visors of pilots so they do not have to look down at their panels all the time. The result is improved situational awareness.

The US Army is actively researching the potential of AR and VR technology both for training and for use out in the field. TAR equipment is becoming a big part of this development. “TAR looks like night-vision goggles, but it can offer much more possibilities,” said Morozov. “It can show soldiers their exact location in the field while also showing the positions of the allied and enemy forces.”

The system is mounted to the helmet the same way the goggles are and can operate during both night and day. TAR replaces the typical handheld GPS device and goggles. Soldiers don’t have to look down to check their GPS location. There is also a thermal site on the weapon that is wirelessly connected to the tactical augmented reality eyepiece and a tablet on the soldier’s waist. The system allows soldiers to see the target they’re aiming at and the distance to it.

The display can be split in two so that soldiers can see where their guns are pointing while also seeing the view from your frontal camera mounted on the helmet. A soldier can see around a corner or over the wall without any risk of getting a headshot. TAR also includes a wireless network that allows soldiers to share information among their squad members or input data whenever the situation changes. “Tactical augmented reality heads-up display can improve the soldiers’ battlefield awareness, reduce the number of devices that must be carried, and help beat the tar out of your enemies more efficiently,” said Morozov.

HUD – also called Enhanced Night Vision Goggles – is an AR device that provides soldiers with a better night sight and tactical information – such as enemy or allied units location – in the form of an overlay. The tool has a targeting reticle that is wirelessly linked to the rifle and shows where a soldier is aiming.

Wargames, where troops can practice fighting against each other, are expensive so they are not conducted often. In training, soldiers are using HUD technology as an inexpensive alternative. A new generation of HUD is being developed that is intended to be light, robust, compact, and customizable. The latter feature is essential for AR devices because what a regular shooter must see and what should be displayed to a squad leader are very different.

The Benefits of AR and VR

The advantages of using AR and VR in military training are widely recognized. The Official Naval Research conducted a study that shows people who do not play video games have a less developed field of vision, are worse at memorizing visual objects, and process new information slower compared to gamers. Given that, they believe game-like simulations with the help of AR and VR can significantly boost cognitive abilities and put virtual training in line with field practices.

AR and VR also benefit the leaders that manage the operations and field soldiers. They can get a better perspective on large-scale missions since they are provided with real-time information superimposed on their visors by augmented reality systems.

The ability to conduct training without using expensive and often fragile equipment is also a major benefit. Instead of getting real vehicles out in the field, AR can offer a flexible training platform that can be even more effective when it comes to getting a better feel of what war is like.

Additional advantages of AR and VR include:

Downsides to AR and VR

There are concerns that people responsible for making key decisions might rely too much on AR enhancements. Should that happen, then any type of disruption or destruction of augmented reality systems will allow the enemy to gain a significant advantage. So, in addition to using AR and VR technologies, basic decision-making tools like maps must be maintained.

Security is also an issue. Securing the communication and data storing by AR and VR systems has always been one of the main concerns in the military along with the policy of AR and VR applications and equipment and their accreditation.

All in all, AR and VR tools are used widely in the military. More and more AR and VR heads-up displays and comprehensive training platforms are emerging on the concept level and with prototypes. Futuristic scenes of warfare are becoming more feasible, even while AR and VR technology is new and requires further research and development.