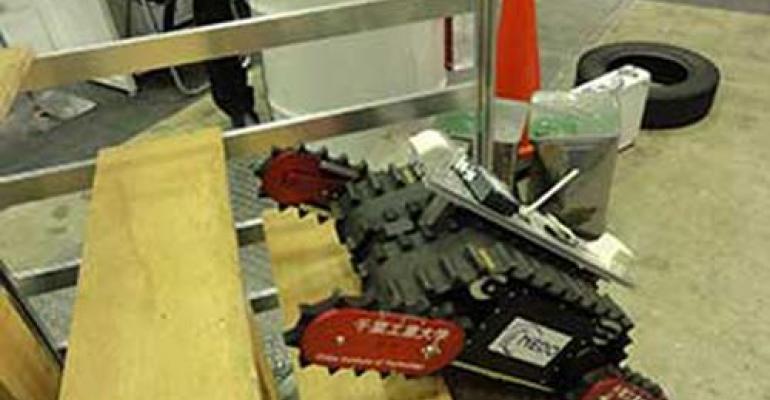 The fuRO Sakura robot has been designed to enter the disabled Fukushima Dai-Ichi nuclear reactor buildings (especially the basement areas, where leaks of cooling water are suspected) and collect information on damage. After the March 2011 tsunami and earthquake, the Japanese government began testing several robotic technologies that will help with future accidents. As we reported this spring, the first robot to enter the plant and provide glimpses inside after the disaster was iRobot's 510 PackBot. That hand-carryable 24-pound machine can climb stairs, roll over rubble, and navigate narrow passages. 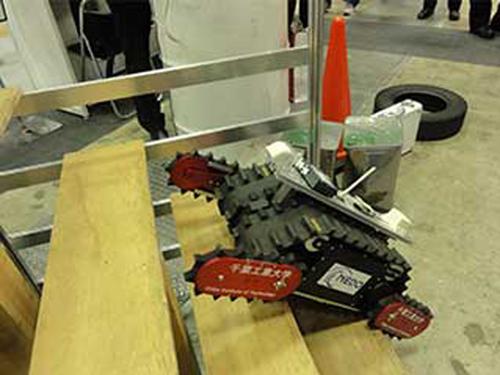 The remote-controlled Sakura is one of several rescue robots fuRO has developed during two generations of search-and-rescue robotics R&D. The Sakura is a result of a project conducted by Japan's New Energy and Industrial Technology Development Organization (NEDO) that focuses on the development of robots for disaster response, including search-and-rescue and quick damage assessment.

Another robot in this project is a modified robotic suit based on the Cyberdyne HAL (Hybrid Assistive Limb) exoskeleton originally designed to help people walk or lift heavy objects. The modified version will augment the suit's power units, sensors, and battery pack with a tungsten shielded vest that reduces radiation exposure by about 50 percent, as well as a ventilation system to prevent overheating. The suit can also monitor the wearer's vital signs, including heart rate and body temperature.

The Sakura robot can roll through narrow passageways and stairs on tank-like treads, finding its way with a camera, sensors, and a directional microphone that detects the sound of moving water. The robot protects itself and its operator against radiation. Its bottom surface is covered by a stainless steel plate 5mm thick, and one of its devices automatically extends and retracts communication cables. It's also designed to go up to three years without maintenance.