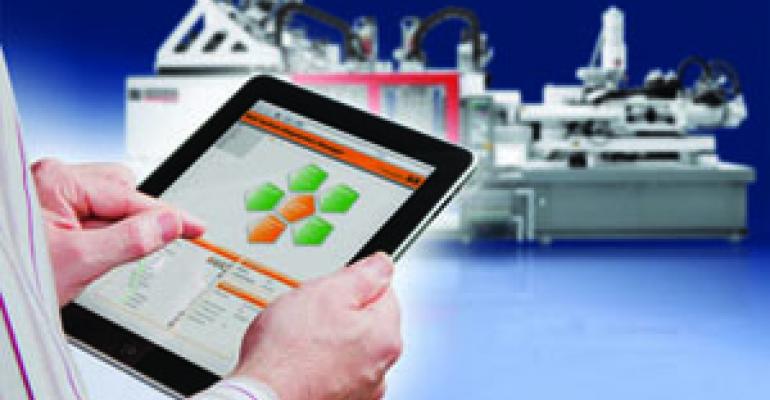 For years, the industrial automation industry has capitalized on advances in microprocessors and computer platforms to deliver ever-improving control solutions. Now the big trend is focused on the front end of these advanced computing systems, with the development of automation system software that enables system designers to more fully utilize the powerful hardware at their disposal and make control systems more intuitive.

The Ease of Use Challenge
"Software is the key to control system development, and the importance of ease of use comes down to the software inside the control system," says Tom Jensen, technology manager at B&R Industrial Automation. "Machine builders are looking for PC-based controls, but with the technology we have in our cell phones and laptops."

PCs as part of the machine can provide access to Web-based troubleshooting tools that everyone knows as well as better graphic interfaces for users. With this type of connectivity, if a machine has a problem, instead of an amber light glowing on top of the machine, the HMI is playing videos to help the operator fix the machine.

"In a sense, it is nothing new because PCs have been around for years but the expectation since 3G smart phones have come out is that 'I have an iPhone and I've never been trained on it, but I can do everything I need to do.' That kind of intuitive operation is now being required of machine builders," Jensen says.

A lot of people will look at software in a modern machine, and say it is complex. But in reality, software is only reflecting the complexity of the machines now being made. If we go back 10 years, for example, a sophisticated machine may have had two servos on it, and it allowed a certain part of the machine to changeover automatically, but now it might have 20 servos.

"Old ideas that have not previously been practical in programming are now starting to come forward again," says Jensen. "S88 is an old concept that has been around forever in batch manufacturing. It is based on the concept that if I have a machine with 20 servos, I should be able to find 20 servo objects in the software. As a maintenance person, I should be able to go up to any of those software objects, manipulate it and get a proper reaction out of the machine. It's simple, but few companies are simplifying their software to that level."

Jensen says an S88 approach to controlling a servo is to have a function block for every servo. If that approach is in place, and the servo comes up with an alarm, the software may say the motor is overheating. "The software object is the window into that motor," he says.

A variety of automation suppliers are pursuing this goal, and the latest Siemens releases of development software include the ability to do controller logic for a PLC, PAC, embedded controllers and IPC for soft control. It also extends to visualization for all types of HMIs as well, up to PC-based SCADA systems and all of the networking required between these devices.

Motion control (servo, stepper, variable frequency drives and the hardware infrastructure around them) as well as specialty functions like machine safety, remote I/O and Web connectivity, is all addressed using one development environment and one user project.

"This is a significant step compared to traditional methods that included a development package for the PLC, a development package for HMI panels and SCADA, plus a variety of add-ons," says Ruland. "The add-ons might provide utilities for network configuration which requires saving a separate configuration file for a particular project, or to configure safety-rated devices or PID for tuning loops."

The current trend now is to have all of these functions come together in a single development environment or framework - an approach embodied in products like Siemens' Totally Integrated Automation (TIA) Portal software. This software is designed for use with all of the company's controllers, HMI panels, industrial network infrastructure and SCADA systems.

"Our existing hardware architecture had a lot of built-in compatibility for networks and interfaces, but now we are bringing all of that to the software configuration tools, says Ruland. "Before, each function had to be configured separately and combined together."

Now, within the TIA portal, the software has the intelligence to self-describe the system components, detect systems on the network and pull them together. Using a common, tag-shared database, the user can update a change between all or some of the devices rather than importing and exporting tags or data types between all of the devices in the system. The new software alerts the user that they have made a change, and how to propagate that change.

"The key for OEMs and system integrators implementing automation systems is a shared compatibility inside the software which eliminates the need for the user to duplicate that effort," says Ruland. "This includes maintaining individual software packages and saving all of the configuration files. For a system engineer, their project is developing a machine and not the individual software program, the separate configuration of the network or one PID tuning algorithm."

Doing More with Less
Bosch Rexroth has responded to this simplification of system integration trend with the development of its EasyHandling technology. Here, standard function blocks can address the majority of individual application needs, along with a new commissioning tool that narrows the scope of system configuration tasks and helps reduce the time required to develop custom software solutions.

"During the last few years, more and more system integrators have downsized and have fewer engineering resources. This trend means that they are looking to automation suppliers to deliver products that are easier to use," says Richard Vaughn, a robotics product engineer for Bosch Rexroth, linear motion and assembly technologies.

If you look at the mechanical solutions such as linear modules used with Cartesian robots and integrated custom solutions, system integrators traditionally did the majority of the integration work. Now, integrators are looking for assembled solutions and are increasingly purchasing linear modules complete with brackets that are pre-made and easy to configure, as well as dropping in subassemblies rather than building the system themselves.

The concept behind the EasyHandling software is to have all drive and control technologies integrated with linear systems, standardized mechanical and electrical interfaces, and new commissioning assistants to simplify the integration process. The EasyHandling system is based on a three-level architecture, which includes basic, comfort, and advanced variants which cover all levels of automation from mechatronic actuators and intelligent axes to the preconfigured system solution. The "basic" level of the system encompasses mechanical single- and multiple-axis systems that are ready to install, with motors and pneumatic actuators such as grippers and rotary modules, as well as sensors.

EasyHandling "advanced" integrates a scalable, preconfigured motion-logic controller compliant with the IEC 61131-3 and PLCopen standards that offers predefined functions for handling applications. The controller is pre-programmed to support coordinated point-to-point motions, along with smoothing and optimized handling paths for Cartesian systems. The drive controller software provides operator maintenance instructions that correspond to the specific run times and travel paths based on the axis-specific mechanical data defined.

Model-Based Design
"A significant trend gaining a foothold in automation system integration is model-based design," says Sal Spada, a research director specializing in industrial automation for ARC Advisory Group. "Companies outside of the automation industry are developing software development platforms that enable engineers to take an abstract view of their problem using design tools that are already applied in their work environments. The environment combines both the underlying system behaviors (aka models) and control strategy.

"The tools used by control system engineers are now allowing them to port their applications onto general purpose automation systems," says Spada. "This is significant because the general automation platform is now becoming a general-purpose computing platform."

Furthermore, the ability to do modeling and simulation will lower the cost of deployment over time and eliminate some of the hardware prototyping associated with machine building.

The MathWorks is seeing a significant increase in the use of model-based design, which has been used in the automotive and aerospace industries for nearly two decades, among machines.

"With model-based design, the machine builder's goal is to design better equipment by capturing important dynamics resulting from the interaction of the mechanical, electrical and control systems. In other words, mechatronic system design," says Tony Lennon, industry marketing manager for The MathWorks. "The engineers at the OEMs are motivated to find integration errors and poor performance early in the development process, well in advance of the hardware prototype stage when the cause of design problems is costly to isolate and correct."

Another benefit for machine builders is the ability to be more innovative through testing of new design approaches and control strategies in the lower-cost simulation environment. Using model-based design means engineers can devote more time to creating better products, rather than spending that time troubleshooting hardware prototypes that fail on the test floor.

To support this greater adoption of model-based design by machine builders, The MathWorks, which has traditionally supported C code (for DSPs and microcontrollers) and HDL (for FPGAs and ASICs) generation, has also released Simulink PLC Coder that adds IEC 61131 structured text generation capabilities for PLC systems.
0 comments
Hide comments
Related