HomeAutomationSoft Robotic Actuators Inspired by Human Muscle
Recent
Automation
Using Low-Code/No-Code Systems for Manufacturing Quality
May 19, 2022
Los Angeles Fire Department Deploys Nation’s First Electric Fire Truck
May 19, 2022
Supplier News Looks at an Automated Coolant Management System
May 19, 2022
Is Magneto the Hero We Need to Destroy Blood Clots?
May 19, 2022
POLL
Using AI To Help the Deaf Communicate
May 19, 2022
Argo AI Expands Driverless Operation to Austin and Miami in Search of More Challenges
May 18, 2022
12 Ideas that Could Change the World
May 18, 2022
Making the AC Power Main Intelligent
May 18, 2022

Researchers are beginning to bridge the gap between humans and robots by inventing technology to make it safer for them to work alongside each other. As part of this effort, researchers at the Wyss Institute for Biologically Inspired Engineering at Harvard University have developed vacuum-driven soft robotic actuators that work like human muscles.

Wyss is at the forefront of robotic research, and the new soft robotic actuators -- called vacuum-actuated muscle-inspired pneumatic structures (VAMPs) -- demonstrate some of their cutting-edge work. The team -- led by George Whitesides, a core faculty member at the institute -- was inspired by the human bicep muscle to develop actuators similar to skeletal muscles that use vacuum power to automate soft, rubber beams. 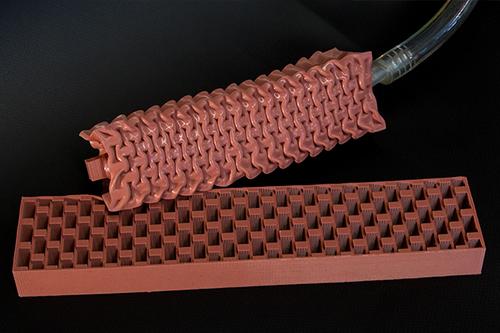 Researchers at Harvard University’s Wyss Institute for Biologically Inspired Engineering have developed soft robotic actuators inspired by human muscle. The actuators act very similarly to human muscle and make it safer for the robots using them to work alongside humans because they are soft and pose no threat to their surrounding environment.
(Source: Wyss Institute, Harvard University)

The benefits of the actuators are that they are soft, absorb shock, and pose no danger to humans that might be working alongside robots that use them, or to the surrounding environment, researchers said. The work brings researchers a step closer to being able to build entirely soft-bodied robots, which will inspire more human-robot interaction and provide innovative applications for industrial and medical fields, among others, they said.

“Functionally, our actuator models the human bicep muscle," said Whitesides, who is also a director of the Kavli Institute for Bionano Science and Technology at Harvard University. "There are other soft actuators that have been developed, but this one is most similar to muscle in terms of response time and efficiency.” He and the team published an article about their work in the journal, Advanced Materials Technologies.

Researchers built the actuator out of soft rubber or elastomeric beams filled with small, hollow chambers of air, similar to the design of a honeycomb. When the vacuum is applied, the chambers collapse and the entire actuator contracts, which generates movement. Because of its honeycomb structure, the actuator can be tailored to enable linear, twisting, bending, or combinatorial motions, researchers said.

Researchers acknowledged that the design of the actuators is unconventional in the way that it uses the vacuum. The design relies on the vacuum to decrease the actuator’s volume and cause it to buckle, which is typically thought of as mechanical instability and thus a point of failure, they said. However, the team used the instability to develop the VAMPs, which mimic muscle because they contract rather than expand in volume, as soft actuators that rely on pressurized systems typically do, researchers said.

Their design makes them suitable for use in service robots, such as those that can be used to assist the disabled or elderly, serve food, deliver goods, or perform similar tasks. The actuators also could be used in robots on industrial production lines, making them safer, faster, and easier to manage by enabling human operators to work in the same space.

“Having VAMPs built of soft elastomers would make it much easier to automate a robot that could be used to help humans in the service industry," said Dian Yang, who worked on the project as a graduate researcher pursuing his PhD in engineering sciences at Harvard. He is now a postdoctoral researcher.

Researchers still have a bit of work to do before the VAMPs are ready for use in commercial robots. They still have not developed a complex control system, though they say the actuation is easy to control due to its simplicity -- when vacuum is applied, the actuators will contract.

Another benefit of VAMPs is that they are designed to prevent failure, with the ability to function even with a small hole, researchers said. They also become motionless upon loss of vacuum pressure, Whitesides said. "It can’t explode, so it’s intrinsically safe," he said. This is in contrast to similarly designed actuators, which can combust and cause damage to humans or their surroundings when pressure is lost.