HomeAutomationMoving Coil Actuators Double Down on Force
Recent
Automation
Q&A With IndyCar Gearbox Expert Anna Chatten
May 13, 2022
Intel Unveils Trust Authority to Boost Security
May 13, 2022
Supplier News Looks at Highly Customizable Industrial Monitors
May 12, 2022
Here Technologies Maps are Key to Mercedes Level 3 Automation
May 12, 2022
POLL
'We Built the Domino's Pizza Tracker for Manufacturing'
May 12, 2022
Break Your Bubble Gum Habit by Watching Its Production
May 12, 2022
This Patch Monitors All Your Vitals, Including Blood Pressure
May 12, 2022
First E-Skin to Anticipate, Perceive Touch from All Directions
May 12, 2022

New moving coil actuator technology from SMAC capable of delivering two to three times the forces of existing actuators of the type will enable substitution of traditionally mechanical and pneumatic applications, said its developer. Ed Neff, president of SMAC, told Design News during a recent interview that this development will enable robotic automation and assembly of high-volume consumer electronics products such as smartphones and headphones that have not been possible up until now.

“The forces with new moving coil actuators are two to three times higher in the same package size,” Neff told us. “The key is that this in motor design will result in robots that are about one-fourth the size of existing products. Two of our customers are the top consumer electronics producers in the world, and they can’t automate because the robots are too big, but now they can.”

The company’s LCB series, to be released in early 2016, also enables SMAC to continue its strategy of reducing prices of electric actuation by 35% every five years. Linear rotary and cross-roller guided options for the LCB product will follow. 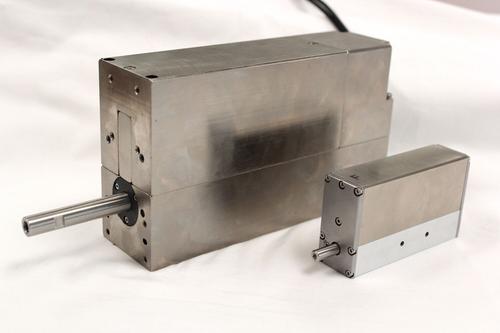 The force multiplication of the LCB actuators over the predecessor LCA actuators is attributed to a much higher flux density (>10,000 Gauss) in the magnetic circuit of their motor. For example, the 25 mm x 40 mm-sized LCB 25 can produce up to 80 N, versus 25 N in the similarly sized LCA 25. Further, accelerations with the new LCB actuator exceed 100 G. This makes it a competitive solution for some higher force applications that have been dominated by pneumatic actuators.

To achieve the higher flux density in the magnetic circuit of the new motors, SMAC went to a high-tech solution. Neff said the key has been the development of geometric configurations that enables a much greater area of the coil to work efficiently, and the new approach also applies a unique magnetic technology that is used in advanced research. The new design is currently patent pending, so information on the specific design is not currently being disclosed.

SMAC started out building assembly machines using pneumatic systems. This served as an R&D bed for developing electronic moving coil actuators to do things that the company couldn’t do pneumatically. The company developed “soft land” motion control capabilities because it was dealing with assembly of fragile components, which required bumping into a surface softly and then pressing in with a specific amount of force.

Consumer electronics manufacturers haven’t moved to robotic assembly for products such as smartphones or headphones, because the robots have been too big and require fingers and hands. SMAC is working on developing a robotic finger that uses a very small motor (since a human knuckle is 20 mm) but also needs to be able to generate 250 millinewton meters of torque to generate the same force that a human finger can.

“No one has ever made a motor that has one-third of that torque, but now it’s possible with moving coil technology and a new magnetic design,” Neff said. “We have developed motors with the torques necessary to create a robotic finger without using gears, since the motors also need to be direct drive.”

The technology used in the LCB actuator is from SMAC's advanced direct drive robotic finger project, recently presented at the International Robotics Show in Tokyo. The 25 mm motor used in the front joint (PIP) is a servo "partial" motor and equipped with a rotary encoder with 15,500 counts per revolution. It achieves a high torque/diameter ratio due to the proprietary magnetic circuit design as well as the coil design. At the show in Japan, SMAC demonstrated a robotic finger implemented as a small SCARA robot.