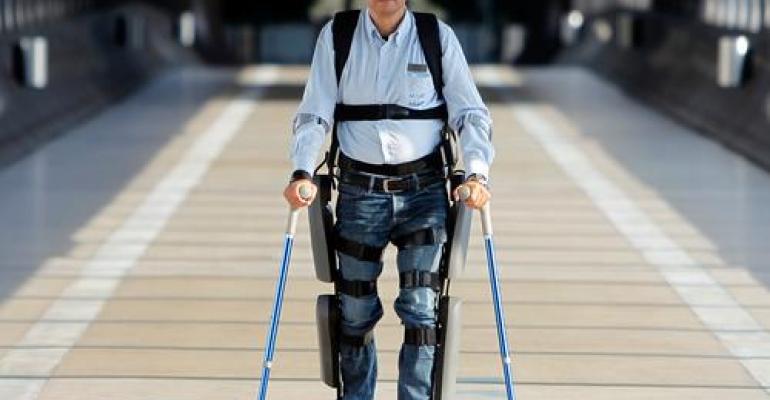 The multidisciplinary field of mechatronics continues to find areas where it can deliver value in new ways. In medical, product development teams are bringing together multiple engineering disciplines, such as mechanics, sensing, electronics, and computing, to design robotic exoskeletons for people with paraplegia.

One such device, ReWalk, is now commercially available in many markets around the world, and it recently obtained US FDA approval. The ReWalk exoskeleton is manufactured by ReWalk Robotics, with headquarters in Marlborough, Mass. The company sells two commercial versions, the Rehabilitation model used in healthcare organizations, and the Personal model designed for consumer use.

Powered exoskeletons have been touted for decades as a way to give super-strength to soldiers or greater lifting capability to warehouse and manufacturing workers. But they are still far from delivering sufficient value for such military and industrial applications. One obstacle is the short life of the battery systems needed to supply power to the suits. 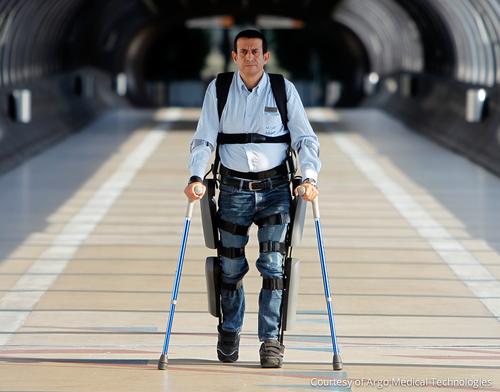 For a paraplegic patient, though, even marginally better mobility can make a big difference in quality of life. According to the US National Spinal Cord Injury Statistical Center, the US sees about 12,500 new cases of spinal cord injury (SCI) yearly. The agency estimates that about 276,000 persons now living in the US suffer from SCI. Paraplegia (either complete or partial) accounts for 41% of cases.

Larry Jasinski, CEO of ReWalk, said assistive exoskeletons have been imagined for many years, but only has the recent convergence of engineering disciplines made such devices possible.

"The dream of walking with mechanical assistance has been around for almost 60 years," said Jasinski, speaking with Design News. "The purely mechanical side of this was thought up as early as 1948, but it wasn't until you could combine the mechanics, the electronics, the software, the battery, and the sensing technology that you could build a device that works in everyday life."

MORE FROM DESIGN NEWS: The Latest and Greatest in Healthcare Robotics

Jasinski said the company doesn't use the term "mechatronics" frequently, but the multidisciplinary approach has been crucial for ReWalk's product development efforts. "To make it work, we had to bring together mechanical and electrical engineers, computer science, and industrial engineering groups to combine all the elements to make it work. It's unusual to have a team with so many disciplines, but everything in this device is highly dependent. It's the combination that's the real enabler here."

The mechatronic integration of sensors, motors, and computer controls allows the ReWalk exoskeleton to function as a self-optimizing system that provides the right amount of power at the right time, and the right velocity at the right vector, to restore movement for the paraplegic patient. The user selects the movement mode he or she desires (sit, stand, turn, walk), provides an initial positional signal, and lets the exoskeleton assist with the movement.

The user starts walking by tilting forward, signaling the suit to take the first step. The suit is designed to replicate a normal waking gait. The system weighs 46 pounds, but most of that is self-supported, so the user only feels the weight of the five-pound backpack, which houses two rechargeable batteries and Windows-based controls.

ReWalk is designed for users with lower-extremity challenges. The device requires that the patient can use his or her arms, as it must be supported with crutches. The suit is customizable and fitted to the patient's hips and legs.

Two rechargeable batteries -- one the primary and the other an auxiliary backup -- deliver power to the suit's hips, knees, and ankles, while onboard computers control the suit's motion sensors and movements. The main battery is a 25.9V DC lithium-ion unit with a 10.4 AH capacity, and the auxiliary is a lithium-polymer battery. The company said power consumption is dependent on the user and the device will last three hours for the heaviest user (220 lb).

A full charge of the batteries, from a 110V or 220V power source, takes at least four hours. The battery life is long enough so that a nightly recharge is sufficient for moderate levels of daily use.

A wrist-mounted wireless remote allows the user to set the mode for the unit, whether standing, walking, or sitting. Modes for climbing and descending stairs are included in some markets, but are not approved in the US. A tilt sensor at the pelvic band measures the forward tilt of the user's body to initiate walking.