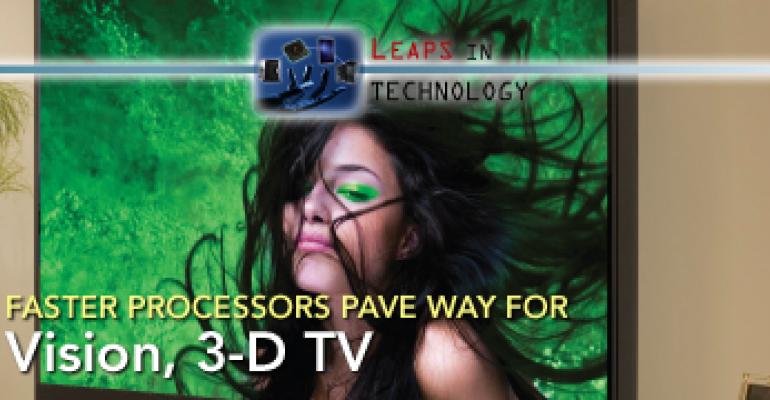 Forget what you hear about the demise of Moore's Law. With or without Moore, electronic products are evolving at a torrid pace. Speedy, single-core processors are being replaced by their multi-core brethren and semiconductors are boosting the intelligence of cars, television sets, desktop computers, phones and home appliances everyday.

Consider the futuristic vision of the car that drives itself.

In 2005, five driverless vehicles crossed the finish line at the second DARPA Grand Challenge. Each traveled 132 miles over desert terrain - without a driver. New computing capabilities transformed autonomous vehicles from fantasy to reality.

The same goes for countless other products. Photos, music and video have changed in a way we couldn't have imagined 20 years ago. In the past 50 years, computers shrunk from the size of a garage to the size of a wallet. And faster processing has been at the heart of all of it.

So what happens next? Here, we look at three leaps in technology you can expect to see in the next five years. All stand as a tribute to the changes wrought by speedier, more powerful processors.

Early last year, a 16-year-old driver from Peck, KS survived after she lost control of her car and flipped over twice. Some say the key to her survival was a camera mounted on the interior of the car's windshield. Using the CMOS-based imaging camera, her mother remotely monitored the girl's driving habits, repeatedly reminding her to buckle her seat belt. When the accident occurred, the belt was buckled and the girl walked away, despite the fact the car was totaled.

In a decade, vision systems like that one from Drivecam Inc. are expected to play a bigger role. They'll help parents monitor teens, enable trucking companies to watch professional drivers and alert drowsy motorists. Moreover, a new breed of forward-looking sensors are going to reduce accidents. Radar, infrared (IR), ultrasound, LIDAR (laser-based radar), CMOS imagers and a variety of other sensors are already helping cars stay on the road, "see" vehicles in front of them and avoid accidents. Ultimately, the Holy Grail of such technology - collision avoidance systems that actively steer drivers out of trouble - may be less than a decade away.

To get there, though, is going to require mountains of data processing. As the sensor systems are called on to make more sophisticated judgments, software algorithms will grow bigger, tying up processors.

"We're seeing a dramatic increase in the need for performance," says Brooke Williams, business manager for the Vision Business Unit at Texas Instruments (TI). "We need to rapidly increase the bandwidth and the MIPS (millions of instructions per second) on our DSP cores."

"The algorithm running on the processor will have to make decisions," says Peter Schulmeyer, director of strategy for automotive microcontrollers at Freescale Semiconductor. 'Is that a person or a mailbox?' The difficulty is recognizing the objects and providing a warning to the driver. These are far, far more difficult problems than you have when you control a simple machine."

Companies such as TI and Freescale are trying to address the situation by rolling out microcontrollers and DSPs. TI's DaVinci(TM) processors are being employed in lane departure and adaptive cruise, among other applications, while Freescale's MPC5561 and MPC5200 microcontrollers are serving in radar-based safety and vision control systems.

If last year's "Beowulf" and this year's "Avatar" are indicators, the entertainment industry has high hopes for 3-D movie technology. Hollywood is said to be investing heavily in James Cameron's "Avatar," a 3-D sci-fi thriller due out in December 2009, and "Beowulf" has reportedly served up some surprising box office numbers.

"Hollywood is seeing returns on 3-D movies and they're higher than the returns on standard movies," says Adam Kunzman, business manager for DLP HDTV products at Texas Instruments. "They've got an economic incentive in the form of direct business experience. Therefore, we expect them to invest in it."

Indeed, investment will drive the fledgling 3-D technology, which wowed attendees at last year's Consumer Electronics Show in Las Vegas. The technology drew thousands of passersby to its displays at the TI booth. Attendees learned it's a far cry from the well-known anaglyphic horror film technology that used red and blue cardboard glasses to separate images into left and right sides. The new systems, called stereoscopic 3-D systems, employ so-called "active glasses" that employ a shutter mechanism that's synchronized with the image on the screen.

Many next-generation televisions will achieve the 3-D effects through the use of semiconductor devices, such as TI's DLP chip, that incorporate millions of mirrors, each measuring just 8 mum across. The key to the technology is the switching speed of the mirrors - at 8 mus, they're about 1,000 times faster than liquid crystal displays, TI says.

"The switching speed translates to a high number of colors," Kunzman says. "Not only can we display three colors simultaneously with one device, we can display 3D."

Mitsubishi's new LaserVue(TM) TV offers 3-D technology by employing a new laser-based version of TI's DLP chips. Using lasers, TI says, helps enhance the image while cutting power consumption roughly in half. Ultimately, though, chip makers and television manufacturers are waiting on the delivery of content to give a boost to the technology. "Right now, we're seeing (movie) releases in DVD and Blu-ray," Kunzman says. "In three to four years, we expect to see releases that will support Blu-ray with 3D."

By some estimates, the number of digital photos will hit a half-trillion in 2009. And while those photos may bring happiness to their owners, they may also the bearers of some frustration, as consumers search for hard drive space on which to store them.

"We can attest to the fact that there are a lot of digital photos being taken today," says Steven Leonard, senior product manager at Microsoft Corp. for Windows Home Servers. "That's one of the reasons why people are looking at home servers."

Microsoft is working with Hewlett-Packard (HP), Velocity Micro, TraquilPC and others to integrate its Windows Home Server software solutions into their server hardware, thus giving consumers a way to protect their content. Others, including Intel, are ratcheting up their home server efforts, as well, in expectation of greater demand in the next five years.

HP's MediaSmart server addresses that problem by incorporating four internal drive bays and enabling users to add external drives, as well. From a hardware perspective, engineers say the key technologies are the hard disk drives and the bandwidth of the processors. Surveys of users, they say, showed most users need between 500 Gbytes and 1 Terabyte of storage space. Significantly, 29 percent of home server owners said they used four or more hard disk drives, while just 15 percent employed a single drive.

Engineers say such technologies may seem like a luxury now, but they won't be in the near future.

"A lot of people have large high-resolution photo repositories or a lot of high-definition video data," Leonard says. "Eventually, those people will want to protect their content."