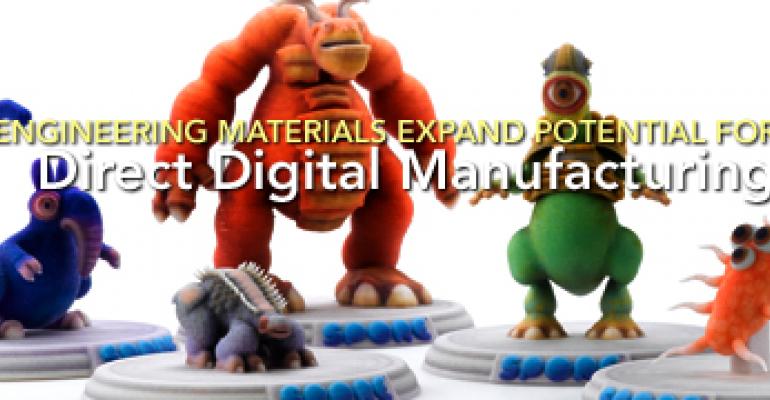 The potential for direct digital manufacturing is heating up as leading players add high-level engineering thermoplastics to their materials' lineups.

Stratasys, the leading supplier of rapid prototyping equipment by volume, is now teaming up Ultem 9085 polether imide with new machines designed for direct digital manufacturing, which is the production of parts directly from CAD files. EOS is now offering PEEK (polyetheretherketone) polymer from Victrex for its laser sintering systems. Other manufacturers, such as Z Corp. and 3D Systems, are developing stronger proprietary materials.

Ultem extends the digital manufacturing process into the aircraft market in a major way. Until now, Ultem 9085 was only available for use in conventional processing methods, such as injection molding, which require expensive tooling.

Manufacturing using equipment originally developed for rapid prototyping creates opportunities for design engineers to make parts even more complex than is possible with injection molds. The cost of the materials coupled with processing time, however, will limit adoption, at least for now to low-volume parts.

"Having Ultem 9085 available for the FDM process will allow aerospace manufacturers to adopt direct digital manufacturing on a larger scale," says Jeff DeGrange, vice president of direct digital manufacturing at Stratasys (and formerly at Boeing). Ultem is strong, flexible and 5- to 15-percent lighter than interior parts made with other plastics. It's an obvious fit for the new models such as the Boeing Dreamliner where light weight is particularly valued.

""DDM can even allow the production of parts that couldn't otherwise be manufactured with traditional methods," says DeGrange. "This can improve the assembly, design and performance."

Ultem 9085 is heat-resistant up to 320F (160C) and is inherently flame-retardant, meeting important compliance standards such as OSU (Ohio State University) heat release of less than 55/55, or 55 kw min/m2 for heat release and 55 kw/m2 for peak heat release.

Other target markets include the marine-product and automotive industries.

The material will be used on the FDM 900mc that was developed specifically for direct digital manufacturing.

Stratasys says the 900mc has an accuracy rating of Â±.005 inch (or Â±.0015 inch per inch, whichever is greater). "This rivals injection molding for accuracy and repeatability," says Product Manager Patrick Robb. "For low-volume production, it's a more cost-effective technique than traditional manufacturing." Achievable accuracy, of course, is dependent on part geometry.

The Stratasys systems also work with polycarbonate, polyphenylene sulfone and ABS as well as other materials.

EOS is also targeting aircraft markets with the first PEEK polymer than can be processed on its high-end P 800 machine that was introduced at the end of last year in Germany.

"The development of this system was a logical step forward into the future because laser-sintering is ideally suited for premium and complex applications which are frequently based on high-performance polymers," says Dr. Hans Langer, the founder and CEO of EOS, which is based in Kralling, Germany.

Designated PEEK HP3, the new material is fire-resistant and light, while possessing high tensile strength. Besides aircraft applications, the polymer will also be aimed at medical applications because of its biocompatibility.

Look for other new developments in the rapidly developing DDM market.

In one of the interesting spins, players can design unique creatures using the Spore Creature Creator with hundreds of flexible drag-and-drop body parts and a virtually infinite number of possible configurations. Players can then digitally paint their creatures with unique patterns. Players can then upload their digital creations to www.sporesculptor.com and place their order. The ZPrinted models (up to 4 inches tall) will be shipped directly to consumers.
Electronic Arts sells the Spore Sculptures for $49.50.