HomeAutomationEmbedded Wireless Monitoring
Recent
Automation
Is Magneto the Hero We Need to Destroy Blood Clots?
May 19, 2022
Using AI To Help the Deaf Communicate
May 19, 2022
Argo AI Expands Driverless Operation to Austin and Miami in Search of More Challenges
May 18, 2022
12 Ideas that Could Change the World
May 18, 2022
POLL
Making the AC Power Main Intelligent
May 18, 2022
How to Make Sure Your Digital Transformation Doesn’t Fail
May 18, 2022
The Internet's Grooviest Slideshow of Legendary International Scouts
May 17, 2022
Electronics Industry Bolsters Root of Trust Security Efforts
May 17, 2022 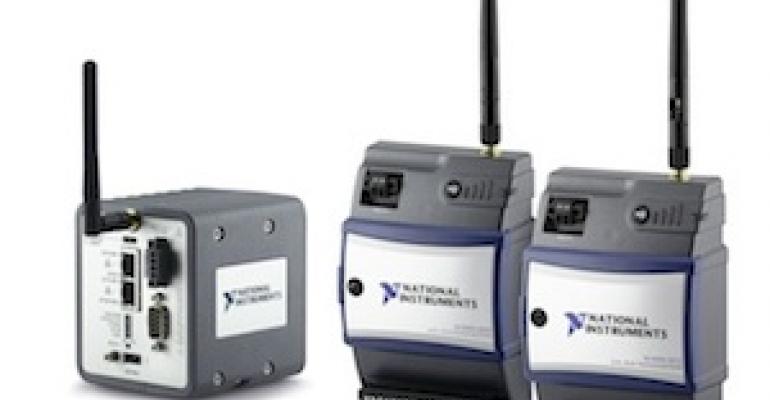 Two new products are extending the capabilities of the National Instruments wireless sensor network (WSN) platform. A new 9792 programmable gateway provides a platform for embedded wireless monitoring and data logging that doesn't require a connection to a back end system. The WSN-3226 voltage/resistance temperature detector (RTD) combination node extends the measurement capabilities to include support for resistance-based measurements such as RTDs and potentiometers.

"The idea behind releasing the NI 9792 gateway is targeting more embedded wireless monitoring applications," says Nick Butler, wireless sensor network product manager for National Instruments. "What we mean by embedded is headless applications where we don't need a host controller in the system. Similar to systems created with CompactRIO and other LabVIEW real-time targets, the gateway doesn't need to be tethered to a back end system."

"The gateway can be deployed to monitor a bridge, tunnel, mine shaft, winery or rain forest without the need for an Ethernet connection back to a Windows PC, PXI system or any other controller," Butler says. "Users can have data logging applications, analysis, trending and alarming all running locally on the gateway."

The gateway is programmable using the LabVIEW Real-Time Module for stand-alone operation and features a high-performance 533 MHz processor and 2 GByte of onboard storage for embedded data-logging. It features integrated web (HTTP) and file (FTP) servers which makes it possible for remote access to measurement data from thin client devices such as smartphones and mobile computers. An RS232 serial port and dual Ethernet ports provide flexible connectivity to other devices such as enterprise-level networks or wired I/O systems.

An important feature is the new built-in web server. With any type of monitoring application, there is always the question of data visualization. If the gateway is in a remote location, how will the user get data if it isn't tethered to anything? The value of the local I/O is the ability to add a radio modem to the system next to the gateway. Typically cell modems and other devices will communicate via Ethernet, TCP/IP, Modbus or serial, all open standards that the user can program in the LabVIEW real-time application running on the gateway. Without investing in a separate controller, the system can provide monitoring, processing and visualization of the data. Users can also combine the gateway with a CompactRIO controller to easily implement a wired and wireless measurement system, because the APIs are very similar.

Monitoring applications are typically split between those that require high speed, high throughput and maybe FPGA timing synchronization and processing on the wired side with slower speed, more SCADA-type systems that NI is addressing through the WSN platform.

"We see a trend moving toward wireless in all facets except for high speed control," says Butler. "A high percentage of customers intend to adopt wireless technology in the future and the majority is planning to adopt wireless for measurements."

Butler says the real controversy today is whether wireless is suited for control. With the latency of over-the-air communications and the potential for nodes or distributed wireless devices to lose their wireless connection or experience interference, the jury is still very much out on wireless for control for mission-critical applications. "But in measurement applications, we have already crossed that chasm and we're seeing heavy adoption of wireless measurement technology today," says Butler.

The WSN-3226 features two bidirectional digital channels that can be configured on a per-channel basis for input, sinking output or sourcing output. Additionally, the measurement node can be powered by four AA batteries, with an operational lifetime of up to three years, or externally powered with a 5 to 30V supply, which offers improved efficiency for energy harvesting applications.

"All of the nodes are available in a programmable version, and allow users to take advantage of LabVIEW graphical programming to wirelessly deploy analysis and control programs that run autonomously on the WSN measurement nodes," says Butler. "The deployed applications can control the digital lines for ON/OFF control, save data samples locally to Flash memory, and perform local analysis, averaging or data reduction."

In a water treatment facility, for example, a customer could take pH and dissolved oxygen measurements in the tanks once an hour, store the 24 samples to Flash memory, then average them or send all 24 data points at midnight each day. This flexibility provides users with the ability to customize the operation of measurement nodes to optimize power consumption and performance.

"One key differentiator of wireless sensor network devices is that the user can program how the node operates, how often it samples, what it does with the data, how often it transmits that data and how often it responds to digital value changes on the DIO lines." says Butler. "You can even respond to network status changes. For example, if your gateway happens to lose power, the node's deployed application will continue to run and you can start saving data locally to the node. Upon reconnection to the gateway, the node can automatically transmit all of the sampled data so that none is lost even if the network goes down momentarily."
0 comments
Hide comments
Related
You Might Like