Buying Tesla? The Wildest Theory Yet About the Apple Car 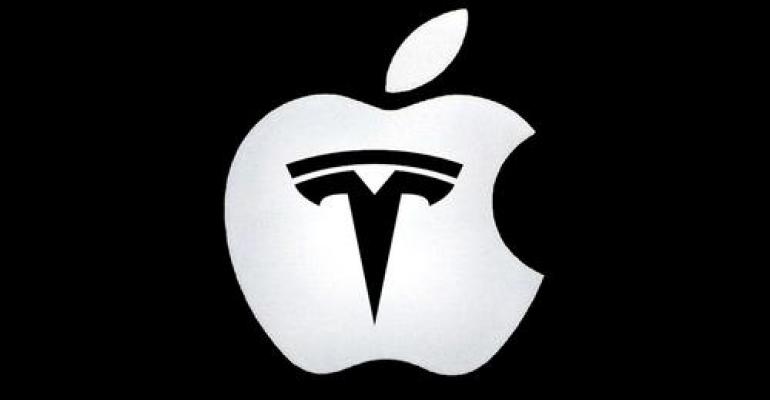 Lots of rumors have been circulating around Apple hiring engineers from Tesla to work on a top secret new project. There are a lot of theories, but pundits fall in line that Apple is working to build its own, possibly driverless, electric automobile. So far what we do know is the project is being headed up by Steve Zadesky, the engineer behind the iPod and the iPhone, who has been given permission to assemble a 1,000 person team for the project according to Business Insider.

There have even been reports of a clandestine “Apple van” creeping around the streets of Palo Alto.

But if you buy the Apple Car theory you have to ask yourself how a company accustomed to building products that fit in your pocket is going to roll out an entire automobile. Entrepreneur Jason Calacanis, host of the podcast, This Week in Startups, has put forth a theory on his blog that's just crazy enough to work:

Calacanis predicts in 18 months we'll see Apple make a go at Tesla to the tune of $75 billion. “No one else in the world could actually make a run at Tesla, because they either don’t have the cash and, most importantly, they don’t have the ability to give assurances to Elon that they won’t [email protected]#$ it up,” he wrote. “Apple’s design team, software, and global distribution would actually LEVEL Tesla up.”

MORE FROM DESIGN NEWS: Apple Could Be Building its Own Car

An article on Yahoo Finance, noted that Apple has more than enough in assets and cash to write a check for Tesla – not to mention GM and Ford, as well.

The idea makes sense. Both companies have been poaching employees from each other for a while now and Tesla's manufacturing capability could well complement Apple's expertise on the hardware and software side. With Tesla's proposed Model 3 set to be at an estimated $35K price point, software and design support from Apple could be exactly what the vehicle needs to penetrate the broader consumer market.

Among Calacanis' points for his reasoning:

"Apple’s Tim Cook very much wants to pursue the kind of “our-shoring” (I made that word up), that [Tesla CEO Elon Musk] has mastered. In fact, Apple wants to build an all-renewable energy production facility in Mesa, Ariz. and they are building the Mac Pro (the sexy black mini-cylinder) at their Texas facility."

"The Model S has a giant iPad in the center console -- essentially -- but it doesn't have many Apps (and no App ecosystem). It would be trivial for Apple to power the center console with a retina display, and exceptionally easy for developers to create Tesla dashboard-aware Apps (think: Pandora, Waze, Apple Maps, iTunes, Beats, Spotify, etc)."

"Apple would need at least seven years to get a car on the road: three or four years to design it, followed by three to five years of building factories capable of any sort of modest capacity."

"You could charge $50 to $150 per App for the dashboard of a car -- people are used to paying a bucketload to upgrade their car hardware."

Calacanis noted that Google could also be considering acquiring Tesla, but dismissed the idea because, “Google’s design and global distribution (for products) just sucks, and they are all over the place.”

In an interview with Yahoo Finance, Gene Munster, senior research analyst at Piper Jaffray, expressed doubt that Apple would purchase Tesla citing that despite the high price ($40 billion by his estimate) Apple would fail to acquire Tesla's most valued asset – Elon Musk, who probably wouldn't want to become an Apple employee.

This is a point to which Calacanis agreed, “Elon Musk as the CEO of Apple? Wow. Doubt he would want to do it, but I could see him being the Chairman – and that would be kind of special.”

What do you think about this theory? Could a megamerger be on the horizon?