Automating the Perfect Game of 10-Pin 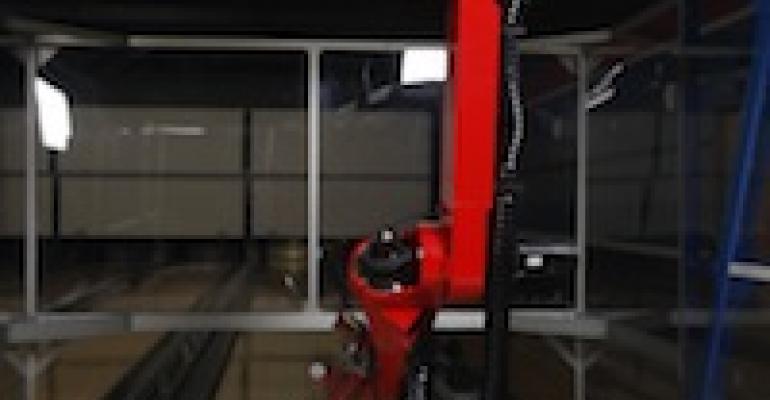 To keep millions of American bowlers stocked with the highest performing, top-of-the-line equipment, the U.S. Bowling Congress (USBC) has led the charge of bowling research and testing technology at the International Bowling Campus. The latest USBC milestone marks the age of the higher-performance bowling robot, a technological curiosity with a concrete purpose dubbed E.A.R.L. (Enhanced Automated Robot Launcher) developed by the engineering firm ARM Automation.

So it should come as no surprise that perhaps the company's most unique robot project of 2010 was E.A.R.L. the bowling robot.

"E.A.R.L's abilities will aid us in quantifying the data relating to ball motion and overall scoreability, helping us maintain the credibility of our sport," says Neil Stremmel, managing director of the USBC National Governing Body. "E.A.R.L has the ability to replicate virtually any bowler's style, which will aid coaching staff by showing how conditions change as individual bowlers compete and how to properly adjust to the ever-changing bowling environment."

One of the ways the USBC serves its members is by testing bowling equipment to ensure that it adheres to its published specifications. To eliminate the variation that a human bowler would introduce during the tests, the USBC turned to automation and robotics.

"The biggest challenge overall for the mechanical and electrical controls development was getting the timing of the bowling ball release within 1 ms," says Greg Wiese, project engineer for ARM Automation. "Considering the 24 mph velocity for the ball release that USBC required, if the system dithered 1 ms, it equated to roughly a degree in difference for ball loft and 0.5-inch difference relative to the foul line. Any additional dither and the ball could be thrown into the ceiling or slammed into the bowling lane."

With what may seem like a simple swing of an arm, there are actually a wide range of parameters that go into a single ball throw test. A typical E.A.R.L. test setup consists of: orientation of the robot gripper relative to the bowling ball's center of gravity; release point of the ball relative to the bowling lane (height, position relative to foul line, position across the width of the lane, loft angle, ball trajectory); and ball release speed and rotation speed. E.A.R.L.'s motion system consists of a linear axis to position the ball across the width of the lane, a 5-axis positioning robot, a ball spinner and release mechanism installed on a gripper.

To tackle the tight precision requirements of this robot application, ARM Automation selected an EtherCAT- and PC-based control system from Beckhoff Automation. Via a Beckhoff HMI, USBC personnel can input their test setup on E.A.R.L. and adjust up to 11 variables for configuring different throws via the HMI to control speed and pick-up orientation. The E.A.R.L. robot with Beckhoff controls can be reconfigured for different parameters in less than 10 seconds.

The system includes a Beckhoff C6920 Industrial PC running TwinCAT NC PTP software and Windows CE operating system along with EtherCAT as the I/O and drive fieldbus. For the HMI, E.A.R.L. is equipped with a Beckhoff CP6901 Control Panel display with touchscreen and visualization functions developed with TwinCAT software.

Position of the E.A.R.L. robot's end effector is communicated to the EtherCAT drives to determine the exact time at which the ball needs to be released. That position measurement is precise (within 1 ms) and creates the correct loft of the ball each time. E.A.R.L. is able to release a bowling ball under test within 250 mus of a scan of the position.

"EtherCAT also allows us to diagnose the bus to detect broken links on the physical layer and easily determine exactly where the problem is located along the line," says Joe Geisinger, ARM Automation's CTO.

"Traditionally ARM used SERCOS for high-end servo systems, but switched to EtherCAT years ago for several reasons," he continues. "These include a common physical layer, a drastic increase in performance, declining interest in legacy fieldbuses, an increasing interest in Ethernet-based networks, and the ability to combine motion and I/O on same network."

"E.A.R.L. required the ability to flexibly gather the inputs from a range of devices and communicate easily with the drives in one flexible environment," Geisinger adds. "TwinCAT System Manager and EtherCAT allow us to do just that; we can pull together different platforms easily. With this system, we can also run multiple tasks such as the I/O and drives at different scan rates, which provided a significant efficiency boost."

ARM Automation used the TwinCAT software platform to develop the robot motion controller and to coordinate the acquisition of I/O and position data from the drives, perform inverse kinematics, generate the next joint position commands, and output the new position commands and data to the drives. "We utilized the path programming functionality within TwinCAT for the multi-axis platform on E.A.R.L.," Geisinger explains. "With NC PTP, we control the motion axes and constantly monitor the status of the EtherCAT drives."

There's also a safety system implemented in E.A.R.L. with TwinCAT monitoring all the safety devices. If anything goes wrong during operation, the drives are disabled and the robot immediately goes into a safe state until the system is reset properly. E.A.R.L. is also enclosed in a protective cage with safety sensors, light curtains and safety relays installed all around to ensure optimum safety.

"We now have more options and better resolution for release height, trajectory, ball speed, RPMs and loft," USBC's Stremmel says. "E.A.R.L is able to handle a larger range of ball diameters and RPMs. Moving E.A.R.L and changing his settings is much simpler and far more accurate than our previous robot solution."