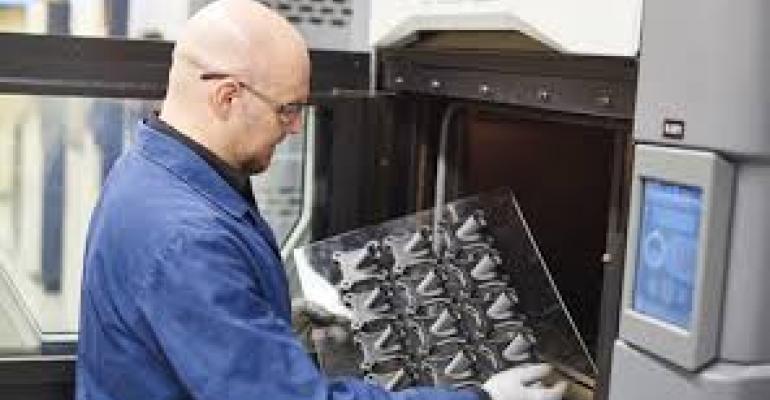 3D printing companies are working to prove that additive manufacturing can compete with traditional production methods.

Is additive manufacturing ready for mainstream production, or does it remain mostly a method for producing prototypes and spare parts? This is the question that faced a panel of experts at the Pacific Design and Manufacturing show in Anaheim last month.

The panelists who spoke at the session, Tech Talk Panel: Additive Manufacturing: The Slow & Steady March to Production, commented on whether additive manufacturing is gaining traction as a viable production method. Panelists included Josh White, principal and creative director at OffWhite; Evan Hochstein, applications engineer at Stratasys; and Matt Sand, president of 3DEO. The session was moderated by Kate Stephenson, founding principal at Dyad Engineering.

Not Quite There Yet

Josh White, principal and creative director at OffWhite believes we’re close but no cigar. “The end product of 3D printing looks so good. People think, oh good, you can do production now,” said White. “Yet going from concept to high-volume production is going to be a stretch. The technology hasn’t hit its stride yet. Not when it comes to producing a final product.”

He did emphasize that we’re getting close to seeing cost-effective additive production. “We’re seeing customization at the higher end,” said White. He noted that the cost break isn’t there yet. “The costs will come down,” said White. “We’re headed there, and as the technology gets more robust and quicker, even beer bottles could be made with 3D printing. We’re not so far away.”

It’s Ready and It’s Getting Done

Matt Sand, president of 3DEO insisted we’ve already reached the tipping point for additive production, even for metal parts. “Forget everything you know about metal 3D printing. There was a hype cycle in 2012 and 2013. People got pulled into the industry and the parts looked terrible,” said Sand. “It’s fundamentally different now. The technologies are changing. When you look at the parts now, it can be hard to distinguish between machined parts and 3D printing.”

Sand noted that part of the change is that 3D printing has matured. Instead of a promise, it’s become a fact. “There are a lot of biases, and that’s changing rapidly. In the next three years,  will move from a novelty to a standard way to produce parts,” said Sand. “Forget what you know from the past and dive in with fresh eyes.”

Sand holds the notion that additive manufacturing has earned its place as a legitimate form of production. “For the right type of part, 3D printing is just another tool in the production tool kit. 3D printing can compete with traditional forms of high-volume manufacturing,” said Sand. “We’re converting designs from injection molding to improve the part. When it’s less than 50,000 pieces, we can compete with injection molding. We’re taking market share.”

Sand also pointed to examples of mass-produced 3D printed products. “The biggest I’ve seen in 3D printing is 300,000 pieces,” said Sand. “These are 3D printed hearing aids. As the cost structures drop, the cost benefit analysis will show a lot of low costs with 3D printing.”

He also sees a bright future for additive manufacturing as the technology continues to improve. “What if you could print every part in a device? In 15 years, you’ll be able to. No waiting on the supplier. We’re going to see a democratization of the technology,” said Sand. “The small company will be able to compete with the large industrial medical part producer – from small component to full assemblies. We’re seeing glimpses of this now. We’ll see a lot of it in 10 years.”

The panel’s moderator, Kate Stephenson, founding principal at Dyad Engineering, sees additive manufacturing already competing successfully against injection molding. “I saw a product that was produced by injection molding. There were only to 200 or 300 of these, and they asked, ‘Should we do this in 3D printing?’ said Stephenson. “For specialized applications, it works very well and it’s cost-effective.”

Maybe We’re There – Maybe Not

Evan Hochstein, applications engineer at Stratasys sees bold moves toward successful additive production, while noting that it’s not uniformly successful. “Each manufacturer of this technology will have a different answer on whether parts can be produced with additive manufacturing,” said Hochstein. “It depends on the material, the system, and the design. It’s based on the tolerances for the technology. Design verification includes a lot of thought. Additive manufacturing may beat traditional and it may not.”

Hochstein noted that each instance, each product has to be evaluated independently. Maybe additive would work, maybe it wouldn’t. “You have to make sure the quality meets what the user needs. This has become even more important in the last year,” said Hochstein. “We’re taking the quality and instilling it in the engineers. You have to show the engineers that this is the process  they need to produce their medical products. Here is the process, here is the procedure. Not only does the quality have to be there internally, you have to be able to show it to the customer.”