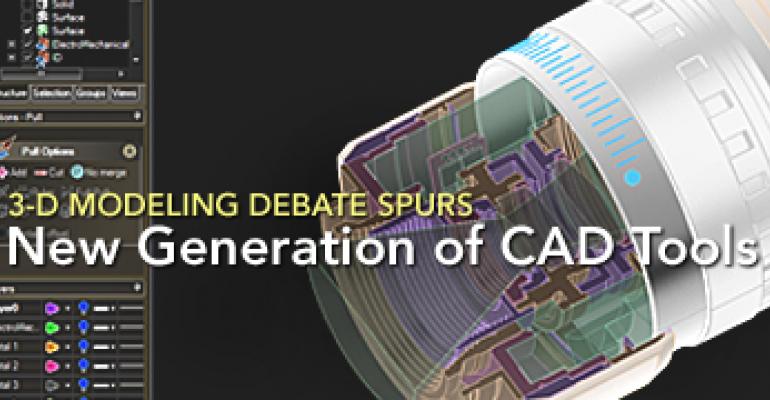 In some ways, it's the CAD industry's version of those age-old debates, like the one over Coke vs. Pepsi, or republican vs. democrat. As the discourse heats up over the merits of traditional parametric, or history-based modeling tools compared with a new breed of direct modelers, the only clear winner may be engineers, many of whom were previously shut out from using CAD and who are now increasingly being presented with a range of powerful and flexible options.

Led by the introduction of PTC Pro/ENGINEER more than 20 years ago, parametric or history-based modeling has dominated the CAD scene with a handful of direct or explicit modelers hanging out there on the fringes. Parametric modeling leverages a history tree to bring control and intelligence to the process of building CAD models. The approach gained traction over the flexible, but functionally-limited, direct modeling paradigm over the years because it was viewed as a more powerful and automated way to create complex models, especially for large assemblies that use families of parts.

Yet in the last several years, parametric CAD modelers lost some of their luster. Users have run into roadblocks due to the complexity of the history tree and they often complain about the inflexibility of the tools for doing conceptual work and last-minute design changes. Their concerns rekindled the decades-old argument, which has come back with a vengeance this last year as newcomers like SpaceClaim rolled out new direct modelers that address many of the shortcomings of the original class of tools. Following suit, history-based CAD leaders like PTC, Siemens PLM Software and Autodesk have come to market with their own variations on the technology, including a new hybrid breed that claims to marry the benefits of both approaches.

In addition to ease-of-use and ease-of-learning, direct modelers also have an edge when dealing with multi-CAD environments, a situation made all the more common today due to globalization and the influx of extended design teams. "Most companies are partnering with companies that have lots of different technologies and most can't afford to have a seat of NX, Pro/E, SolidWorks or Inventor sitting around in their design shops," says Monica Schnitger, a market analyst with Schnitger Corp. "By removing the concept of the history tree, direct modelers function as a common ground platform."

While there is a fair share of marketing hype surrounding the competing modeling approaches, Evan Yares, a long-time CAD industry consultant, acknowledges that a CAD revolution has indeed arrived - one that will make CAD experts far more productive, while opening the door to non-CAD technicians who have previously been shut out from effectively using the technology. "All these different approaches are coming at the same problem - making CAD easier to use," says Yares, who claims only 30 to 40 percent of engineers currently use CAD effectively. "What is comes down to is the modern CAD program has become so complex, with so many commands, that a normal person can't run them."

That was the whole premise behind the introduction of SpaceClaim Engineer, which was initially released to the market in April 2007 with the fourth iteration announced last month. The CAD upstart was predicated on taking advantage of inexpensive PC hardware to unleash a new type of CAD tool that would have appeal for the enormous untapped pool of designers and engineers for whom traditional parametric-based tools were overload. "We see direct modeling as the vehicle to break out of the glass ceiling of 1 million seats of solid modelers sold and to get an order of magnitude of new growth in the market," says Blake Courter, co-founder of SpaceClaim.

SpaceClaim Engineer doesn't attempt to unseat traditional CAD tools, but rather appeal to engineers and designers upstream in the process who are not traditional users of CAD. In addition, the software - which officials are quick to point out requires minimal training - is positioned as an adjunct tool within an engineering organization, optimized for quick conceptualization of new designs or for preparing CAD models for analysis, according to Chris Randall, SpaceClaim CEO. "This is 3-D modeling for engineers as opposed to 3-D modeling for CAD jocks," he says.

PTC also views the market for direct modelers and parametric CAD tools as mostly a separate audience. The company's flagship program, Pro/ENGINEER, is ideal for the majority of instances when products are complex and highly engineered, for example, or when the capture of engineering constraints and relationships is critical to the success of the design - especially if the product strategy is family-based or platform-driven. Yet even PTC, which invented parametric, recognizes the door is open for a different approach. Last year, PTC acquired CoCreate, one of the oldest and more successful direct modelers, along with Kubotek's KeyCreator, and the company believes there is ample opportunity to grow the explicit modeling category far beyond where it stands today.

While PTC doesn't rule out the possibility of eventually bringing the two technologies together, for now, the company believes the two modeling approaches appeal to distinct needs and audiences, thus are best addressed as separate products. Engineers should choose between the two disciplines based on the types of products they create, the time to market forces that drive them and the types of processes that define their workflow. "If you try to put two fundamentally different technologies together, it's somewhat of a risk that you'll end up with the worst of both rather than the best of both," says Justin Teague, PTC's senior vice president of CoCreate sales. "If you put too much constraining technology in explicit, you might lose some of the flexibility, whereas if you add too much freedom to parametric, you don't really get the big bang for the buck that you're looking for out of that approach."

In fact, two of the biggest 3-D CAD providers have taken the cross-pollination strategy to a new level, blending both modeling technologies in a single product. Siemens PLM Software launched its strategy last June, with Synchronous Technology, which it touts as a history-free, feature-based modeling approach now offered in both its NX and SolidEdge CAD products. Based on a proprietary application layer built on top of Siemens D-Cubed and Parasolid software, Synchronous Technology employs live rules and solver technology to overcome the order dependencies that have frequently dogged the performance of history-based CAD tools. Through this technique, Siemens is able to preserve the controls and automation advantages of a parametric modeling approach while taking advantage of the flexibility, direct interaction and scalability that have been the hallmark of direct modelers, according to Dan Staples, director of SolidEdge product development at Siemens.

Autodesk appears to be taking a similar approach with its Inventor Fusion technology, which it recently previewed and is slated for a future Inventor release. Fusion technology will enable engineers to switch between parametric and direct workflows as it make sense for a particular task and the software will take responsibility for how to bring the two models together and to track the changes in a single digital model. "Customers need a two-way street," says Andrew Anagnost, vice president of CAD/CAE for Autodesk Manufacturing Solutions. "They want to be able to directly edit a model when they want to and lock it down in parametric when they want to. They want to keep parametric when they want it and throw it away when they don't. That's what we've done with Fusion."

It's still too early to tell whether Fusion - or any of these new direct modeling technologies - will ultimately give engineers that ultimate level of design freedom. One thing is clear, however; we're finally getting to a point where engineers may soon benefit from the best of both worlds. "Parametric has some very good points, but it also has some weaknesses," says Ken Versprille, PLM research director at CDP Assoc. LLC, a market research firm specializing in CAD and engineering. "Where we are today is getting to the point where we can avoid the weaknesses."

That is welcome news for Jonathan Gamble, director of engineering for Magnet-Schultz of America Inc., a privately-held manufacturer of electromagnetic devices with headquarters in Germany. A long-time SolidWorks user, Gamble was getting pressure from the parent company to switch to the CoCreate SolidDesigner direct modeler, which was used extensively at the company's German divisions. Yet, Gamble said he had reservations. The company's FEA tool and PDM system were not compatible with the CoCreate technology, and Gamble was concerned about how the lack of history-tree technology would affect the design of families of parts, which was critical to the Magnet-Schultz product family.

As a result, Gamble opted not to switch and keep both tools in house. Still, he's pleased by all the recent activity related to bridging the worlds of direct modeling with history-based CAD. "There's room for both. The trend I see is that history-based modelers are starting to incorporate direct modeling features. So in five years time, we'll have the best of both systems," Gamble says.

All aboard the Direct Modeling Train: See how the new hybrids and direct modeling options stack up. Learn More