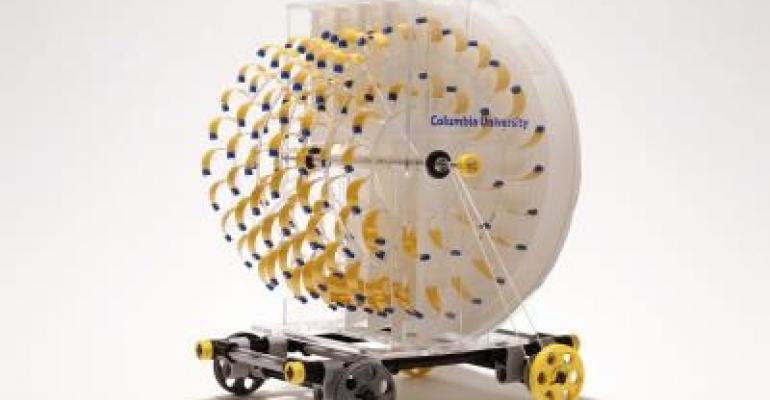 Researchers have developed a floating, piston-driven engine that generates electricity causing a light to flash, and a rotary engine that drives a miniature car, both using the power of evaporating water.

Most people rarely thinking about the natural process of evaporation, that powerful force that takes water from the earth and returns it to the atmosphere on a regular basis as part of the environment’s sustainability. But researchers at Columbia University focused their attention on this process and have used it for the first time to create electricity through two novel devices.

The scientists in Columbia’s physics and biological sciences department have developed a floating, piston-driven engine that generates electricity causing a light to flash, and a rotary engine that drives a miniature car, both using the power of evaporating water.

These devices are just the tip of the iceberg, they said, as researchers anticipate that the largely untapped power of evaporation scaled up could be used to produce electricity through floating power generators that sit on bodies of water like bays or reservoirs, or from rotating machines similar to wind turbines that sit above water, said Ozgur Sahin, an associate professor of biological sciences and physics at Columbia University and lead author on a paper about the work published in Nature Communications.

"Evaporation is a fundamental force of nature," Sahin said. "It's everywhere, and it's more powerful than other forces like wind and waves."

Key to making the devices function are bacterial spores that shrink and swell with changing humidity and can deliver a significant amount of energy. Sahin made this discovery last year based on work he began as a scholar in residence at the Wyss Institute for Biologically Inspired Engineering at Harvard University.

Sahin’s work at Columbia focused on building devices that could be powered by this energy. To build the floating, piston-driven engine, he and his team first glued spores to both sides of a thin, double-sided plastic tape similar to what was used in cassette tapes to create a dashed line of spores. They then did the same on the other side of the tape, in a way that the dashes on that side overlapped with gaps on the other.

When dry air shrinks the spores, the spore-covered dashes curve. This transforms the tape from straight to wavy, shortening the tape. If one or both ends of the tape are anchored, the tape tugs on whatever it's attached to. Conversely, when the air is moist, the tape extends, releasing the force.

Placing dozens of these tapes side by side created an artificial muscle that researchers placed inside a floating plastic case topped with shutters. Evaporating water inside the care made the air humid, which caused the muscle to stretch, which opened the shutters to dry the air out. The escaping humidity shrunk the spores, resulting in the tape contracting and pulling the shutters closed, thus allowing humidity to build again.

This cycle of motion continued on its own when researchers placed water under the device, operating like an evaporation-driven piston that produced enough energy to cause a small light to flash, Sahin said.

The other engine created by the team, dubbed the Moisture Mill, is comprised of a plastic wheel with tabs of tape that are covered on one side with spores. Half of the wheel sits in dry air, which causes the tabs to curve, while the other half sits in humid environment, which straightens the tabs. This causes the wheel to continuously rotate, basically acting as a rotary engine not unlike a wind turbine, researchers said. The team then built a small toy car powered by the mill, which successfully rolled on its own powered only by evaporation.

Both of these technologies could scale to create sufficient amounts of energy to power in their own ways, Sahin said. For example, the floating piston engine, if improved, could potentially generate even more power per unit area than a wind farm, he said.

The latter, on the other hand, could be the future of power for electric vehicles if Sahin’s prediction is correct. He said the evaporation-powered rotary engine makes it possible to design engines that, rather than needing fuel or a typical battery, instead use the mechanical energy stored in spores to propel a full-sized vehicle.

The U.S. Department of Energy and the Office of Science were among those that funded the research.

Connect With Your Industry. Register today to engage with more than 20,000 industry professionals at Pacific Design & Manufacturing, Feb. 7-9, 2017, at the Anaheim Convention Center. In an increasingly digital world, face-to-face connections matter, and our networking activities help you build relationships you simply can’t forge on the phone.