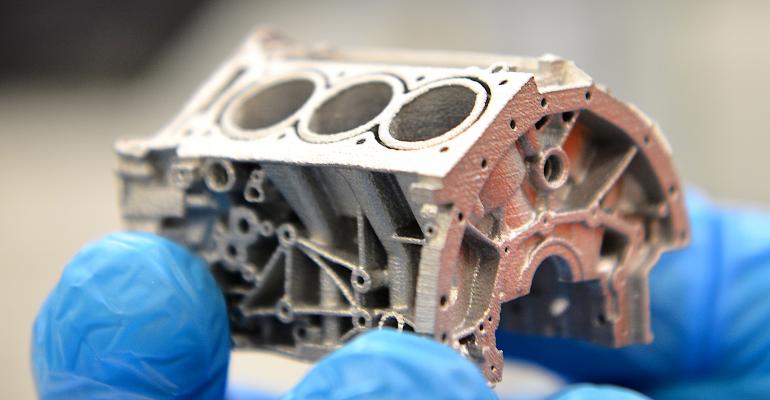 Unfortunately, Ford cannot tell us yet exactly what these first parts will be, because the company considers this new capability a technical advantage that it doesn’t want to disclose to rivals too soon, said Ford’s technical lead for additive manufacturing, Harold Sears.

Sears describes the parts as “tissue box-sized,” and says he’ll produce them in an initial volume of about 200,000 parts per year. At this scale, the ExOne printer can create numerous parts per batch, which is one of the aspects that makes binder printing fast enough for production.

Identifying candidate parts involves a process of analyzing the parts Ford uses today, said Sears. “It is taking a look at what is metal in a vehicle today. Does it fit the size criteria? What is special about that part? Is it part of a sub-assembly that we can cut down from 20 parts to two parts?”

At the same time, Ford looks for small parts that it can nest among the primary part in the printer, getting still more production at the same time. It is like a communications satellite carrying bundles of cube sats along for the ride to orbit.

“We still have empty space in the build box,” Sears observed. “Are there other parts that can come along for free?”

The imminent arrival of volume production from a 3D printer may seem surprising to those familiar with the tediously slow processes commonly employed. The difference here is the use of binder jet printing, which lends itself to higher-speed work. 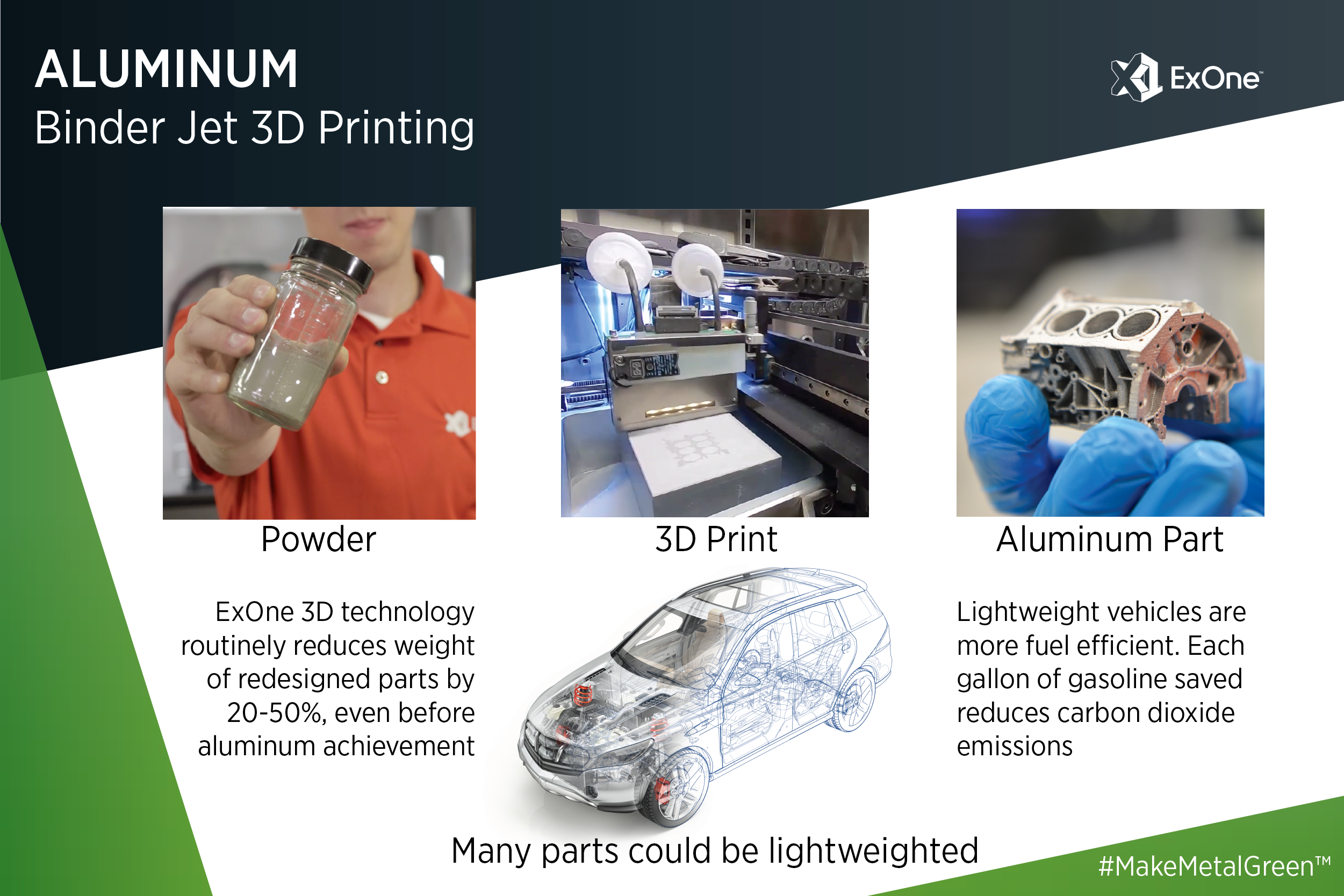 “When we’re talking about binder jetting, what we’re really talking about is the fastest, most production-ready form of 3D printing in the world,” touted ExOne Technical Fellow Dan Brunermer.

“The reason it is so fast, the reason it is so production-ready is really simple,” he continued. “Unlike those other forms of 3D printing where you’ve got a little tiny laser or a little tiny nozzle putting out small amounts of material, we’ve got a big, wide area print head depositing huge amounts of binder precisely where we need it according to the bit map we’ve generated. On a layer-by-layer basis, there is absolutely nothing faster!”

The process works using a box of fine powder material, precisely spraying the binder material where the material should stick together to create the part. In the case of the Ford part, the material will be aluminum powder.

Once the part has been printed, it needs to be sintered to make it a strong part rather than a pile of powder held together by binder glue. This process shrinks the part from the size that it emerged from the printer, so designers have to take that into account ahead of time.

“The most important thing to know is that when you eventually sinter your part, it is going to shrink,” said Brunermer. “And you’re going to need to scale your parts up by about 20 percent to adjust for that.”

The precise correction factor is 19 percent in the X and Y axes and 21 percent in the Z axis. ExOne promises less than 1 percent dimensional tolerance of the final parts with tuning to the process.

“This is a breakthrough in making 3D printed and sintered parts for the auto industry,” concluded Sears. “While the 3D-printing process is very different than stamping body panels, we understand the behavior of aluminum better today, as well as its value in light-weighting vehicles. High-speed aluminum 3D printing paves the way for other opportunities that we’re just now starting to take a look at because of the ability to do complex parts with aluminum that previously weren’t possible. It’s really opening doors for other opportunities.”

Ford bought its first ExOne 3D printers in the early 2000s for creating sand molds and cores for metal casting. Making the parts needed to make parts has been a common application for 3D printers in the manufacturing process, but now Ford is starting to eliminate a step so it can directly print the final production part that goes on customers’ cars.