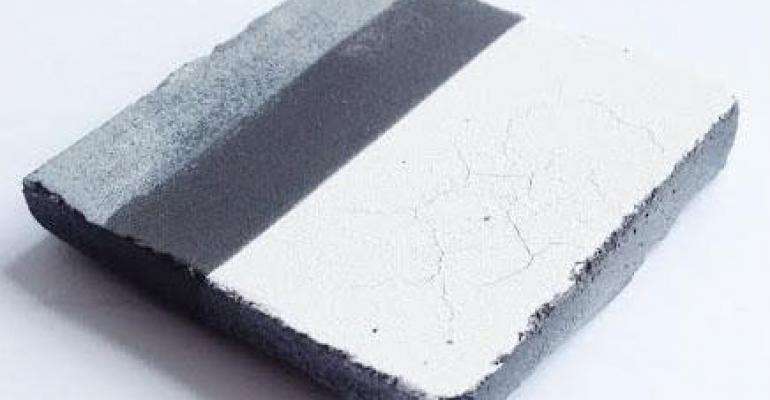 We've told you how it's become possible for buildings to harvest solar energy through a coating on the glass of their windowpanes. Now scientists are developing new types of concrete for constructing buildings that could also generate solar energy.

One of the latest of these types of materials is called DysCrete, from a Swiss scientist and a team of German scientists at the University of Kassel. DysCrete uses organic dyes to ab-sorb light and produce electricity through electrochemical reactions, according to researchers.

Specifically, DysCrete (seen below) is an electrographic concrete that is coated with layers of titanium dioxide, organic liquid, an electrolyte, graphite, and a transparent surface. This creates a dye-sensitized solar cell, while the concrete becomes the electrode. 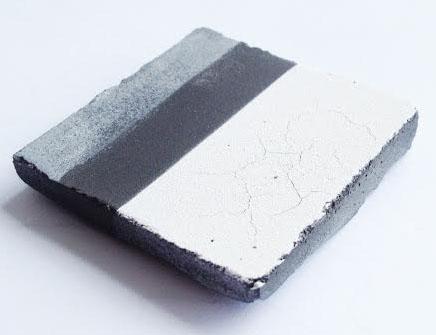 The dye-sensitized cell itself was not created by the Kassel team, however; a Swiss chemist named Michael Gratzel invented that part of the DysCrete solution. Kassel researchers Heike Klussman, head of visual art studies at the university, and Thorsten Klooster, project manager of the field, are working on creating better coatings for the cell through an interdisciplinary project called Bau Kunst Erfinden, or Building Art Invention. The coatings -- made of organic materials -- will optimize the efficiency of the cell, they said.

The DysCrete cell is comprised of a structure of layers that each has its own function. Together the layers form a redox reaction coating that generates energy through an electrochemical process when exposed to light. By adjusting the dye and electrolyte components, the layer system can be tuned to specific wavebands of light, including the very edges of the visible spectrum. And dye-sensitized concrete is relatively low-cost to produce, giving it great potential as a cost-effect source of energy, researchers said.

"It is our goal to develop a material that can be employed in the construction industry in the future, e.g. for prefabricated components for building construction, facade elements, and innovative wall systems," Klussman said in a press release. "At the same time, it will contribute to a sustainable and decentralized energy supply through its function as a solar cell."

Researchers originally used currant juice as the coating for the cell, but are experimenting with other fluids now to reach an efficiency of 2%. "This is profitable because the manufacturing costs for dye-sensitized solar cells are significantly lower than the cost for silicon solar cells," Klooster said in the press release. Moreover, the components for dye-sensitized solar cells are readily available, ecofriendly, and easily recycled, which makes them cost-effective and less hazardous to produce.

Klussman and Klooster received 150,000 Euros, or about $169,000, from the Federal Ministry for Housing and Development for their project, which will continue into the middle of the year. As yet, DysCrete has not been put into production.

Elizabeth Montalbano is a freelance writer who has written about technology and culture for more than 15 years. She has lived and worked as a professional journalist in Phoenix, San Francisco, and NYC. In her free time she enjoys surfing, traveling, music, yoga and, cooking. She currently resides in a village on the southwest coast of Portugal.