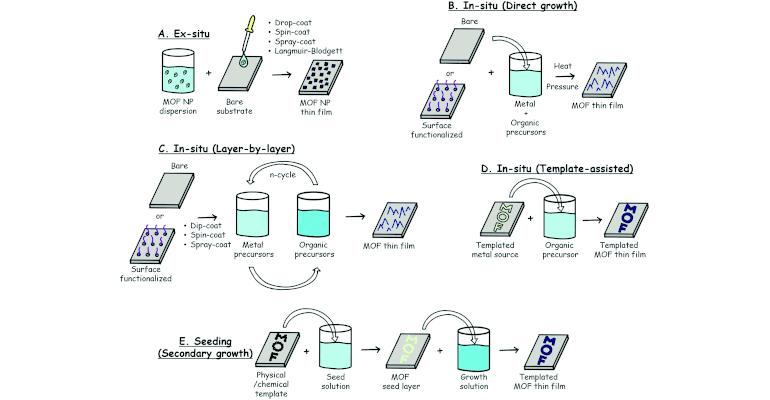 A trio of NETL (National Energy Technology Laboratory) scientists recently released a paper entitled “Metal-organic framework thin films as versatile chemical sensing materials,” which is considered one of the most popular articles published on Materials Advances in the last year. Their work has spurred innovation in sensing materials that go beyond the energy sector for use in a wide range of fields.

As mentioned, the paper focuses on metal-organic framework thin films, a class of porous coordination polymers in which metal ions or clusters are coordinated by organic ligands to form one, two, or three-dimensional structures. These materials have attracted significant attention in recent years given their large surface areas, tunable pore sizes, and potential for use in various applications, including gas storage, catalysis, and sensor development.

That said, MOFs for sensor applications provide several benefits, including reduced manufacturing costs and environmental impact compared with currently used sensors. The use of MOF-based sensors is rapidly advancing, with a large number having been developed over the last decade. The sensing mechanism of MOFs is based on the change in their physical properties, such as porosity, pore size, and pore wall composition, when exposed to target molecules. In the past, MOFs have been employed as sensors for various gases such as CO2, NH3, H2, VOCs, and H 2 S. MOF sensors have also been utilized as humidity sensors, UV light sensors, and sensors for heavy metal ions.

Because of their various make-ups and organic linkers, scientists can produce materials that can target different gasses, vapors, and liquids and sequester them within pockets housed in the sensing structure. There are several methods for producing MOF thin films for target-specific sensors. These include ex situ, meaning that the MOF is not synthesized on the substrate but is grown on the substrate after the MOF has been synthesized. This method is typically used for MOF thin films that are too thick to be synthesized in situ.

In situ fabrication of MOF thin films is another popular technique to deposit metal oxide thin films on metal surfaces. Such substrate materials can be selected from any suitable material compatible with the MOF film deposition process. For example, substrate materials may include, but are not limited to, metal oxides, semiconductors, glass, plastics, metal foils, metal wires, and the like. The substrate may be a single layer or multiple layers of these materials.

The scientists used a variety of thin film materials to create many different sensors capable of detecting everything from CO2 to benzene. (Image credit: NETL via Materials Advances)

The latest innovations in developing MOF thin films have produced a wide range of sensing technologies capable of detecting and sensing analytes, including ions, small molecules, gases, temperature, and other analytes of interest, using optical, electrical, and acoustic techniques. They can also benefit industries outside the energy industry, including medical, manufacturing, environmental, and others. Of course, to get there, the MOF thin films will need further development and will require increased stabilization to handle harsh environments and ways to mass produce the technology without increased costs. That said, Design News had a chance to ask the NETL scientists about their latest MOF thin film materials advancements.

What exactly are MOF films?

NETL: Metal-organic frameworks (MOFs) are crystalline microporous materials composed of metal ions linked together by organic linkers. Because MOF materials exhibit extraordinary surface area and tunable porosity, they have caused an explosion of research in a wide range of applications, including gas adsorption, gas storage, gas/liquid separation, catalysis, and sensing, which is the focus of our review.

While MOFs are typically synthesized as free-standing particles, some applications require high-quality nano- to micro-meter thick layers. For example, optical sensors that detect gases through subtle changes in a refractive index typically require very uniform thin film coatings of MOFs. This motivates MOF research to discover new synthetic techniques to prepare MOF thin films. In our review, we focus on one such application, namely chemical sensing, and how MOF thin films have changed the scene.

How are these thin films used?

NETL: MOF thin films have a range of applications, such as membranes for gas separation and catalyzing new reactions. Moreover, sorption-induced optical sensor application is one of the fascinating applications for selective gas sensing. This is because the sorption properties of the MOF can be controlled through its composition (i.e., type of metal ions and organic linkers) and the synthetic technique used to prepare the MOF.

Thin MOF layers can be integrated into a range of sensor platforms, such as quartz crystal microbalances, which detect small changes in mass due to gas absorption; optical fibers, which detect changes in absorbance and/or luminescence when target molecules interact with the MOF; and electrodes for electrochemical sensors, just to name a few. In our review, we aim to give an overview of how MOF thin films have been utilized in these various sensor platforms and the synthetic techniques required to incorporate MOF thin films into these devices.

How do your efforts differ from similar technologies?

However, MOFs begin to differentiate themselves from other materials in regard to their high tailorability, which gives them an advantage over other potential sensing materials like zeolites or nanoparticles. For example, the specific window size of MOF can only allow target gasses to enter the MOF pore, or the chemical functional groups within the MOF structure can be controlled to preferentially interact with metal ions of interest.

What was the biggest challenge to overcome to develop MOF thin films?

NETL: When the MOF comes to thin films, it is about producing the MOF layer exactly where you apply it for the applications and with the exact thickness. Once that synthetic hurdle is overcome, the other hurdles of size scalability (meter vs. centimeter), high reproducibility, and time scale (seconds vs. hours), which are essential considerations of mass production, need to be solved.

At NETL, we have developed a templated synthesis for some MOFs. The process is rapid, forming films within minutes, and does not require expensive equipment or heating. We have demonstrated the versatility of this synthetic approach by growing MOF films on sensor platforms for gas sensing applications and have also designed a thin film for selective luminescence-based detection of economically critical metal ions.