Robotocists Debate: How Human Should a Robot Be?

As engineers move closer to developing robots that perform human tasks, many are asking: How human do I want this robot to be?

During the opening keynote of the recent Freescale Technology Forum (FTF), Freescale's medical segment marketing manager, David Niewolny, demonstrated an on-stage application of a communications robot. The robot enabled a patient in bed to talk to his doctor via an onboard video screen.

The robot, designed and built by VGo Communications Inc., doesn't look human. Rather, it's a two-way audio-video communications platform on wheels. No legs, no arms, no head.

Tim Root, the chief technology officer and co-founder of VGo, said VGo's non-human form was intentional. "We wanted it not to feel intimidating. Our approach is that form follows function. We spent a lot of time making it look appealing, but we didn't want it to be a humanoid."

Indeed, VGo's design places function first. The robot, which serves as an avatar of sorts, enables a remote driver to communicate with others over an audio-video connection. The driver can use his or her laptop computer to remotely steer the robot, operate the onboard camera, or just talk to people over an Internet-based link. It employs four microphones for better audio, and a small display to enable others to see the driver's face. But there's not even a hint of humanness.

VGo's functional approach is shared by early household robots. The Roomba vacuum-cleaning robot, for example, looks more like a headless turtle than a human. Friendly Robotics' stubby RoboMower lawn robot is similarly shaped. Neither strives for a humanoid look.

Robotocists know, however, the time is coming when they will need to add pleasant human qualities to their robots. Anybots Inc., for example, offers the QB office robot, which performs many of the same functions as the VGo. Anybots' unit, though, takes on a semi-human shape. 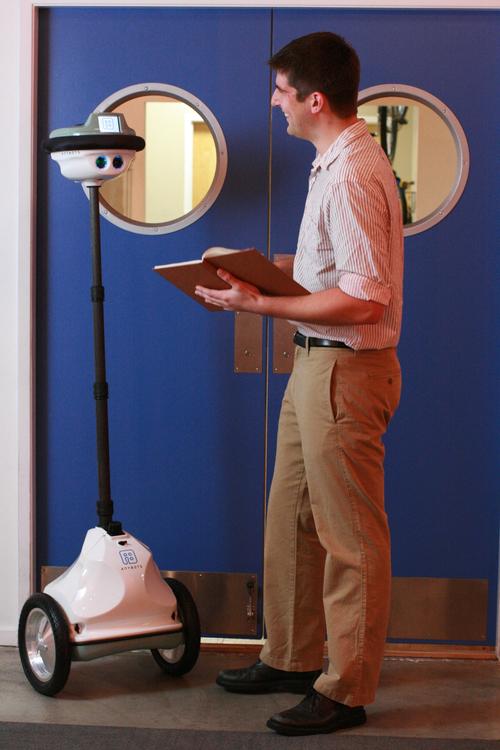 Looking like a cross between a Segway and an ET doll, the QB has two big "eyes" that give passersby the warm fuzzies. A Carnegie Mellon Robotics Institute professor who has used the QB says he became convinced of the robot's appeal when a troop of visiting Girl Scouts all wanted to touch it.

Robotocists say the human touch is going to be important in some applications. In particular, robot dolls for small children and for the elderly may need a dose of it. "Those are applications where that kind of model makes sense," VGo's Root says.

Ultimately, though, robotocists know they will have to continue to learn about that human touch. At the same time, they realize they will have to be careful how they apply it, lest the robot fall into the so-called "uncanny valley" -- wherein humans feel a sense of revulsion when they look at a humanoid robot.

During another of FTF's keynotes, robotocist Heather Knight unveiled a tiny wisecracking robot with two arms, two legs, and a head. To learn more about making connections between people and robots, Knight has focused her research on human performers. "When you combine performers and engineers, you can push the frontier forward," she said.

Still, robotocists are stepping lightly as they approach the uncanny valley. "If you're going to make your robot human-like, then you've got to make it really, really human," Root says. "If you miss that, your form factor will be rejected."