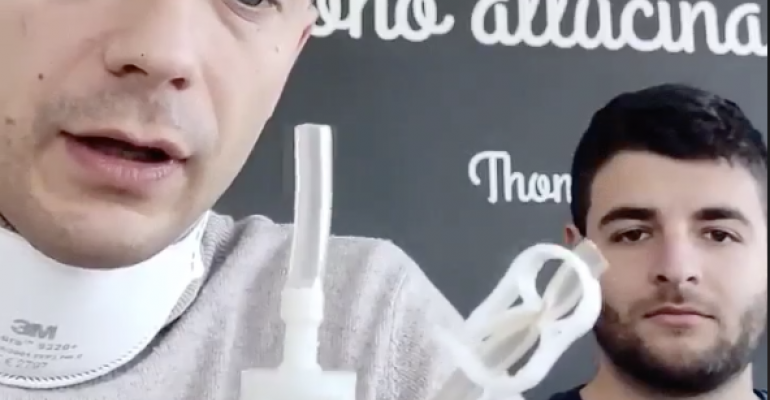 When a hospital in Italy faced a shortage of ventilator valves for COVID-19 patients, putting several lives in jeopardy, an entrepreneur came forward to 3D print replacement parts. The manufacturer of the original valves has threatened to sue for patent infringement.

Editor's note: Since posting this article, we have learned that the medical device company in question has responded to the accusation that it was threatening a lawsuit. Here is what UK-based Intersurgical said on its Twitter feed: "To confirm: recent reports from Italy are totally incorrect. We were contacted at the end of last week for manufacturing details of a valve accessory but could not supply these due to medical manufacturing regulations. We have categorically not threatened to sue anyone involved. The valve is an accessory supplied as part of a CPAP Hood system, which alone costs a few euros. Our Italian company has been doing their utmost to supply the hospitals at this time and have been supplying these free of charge in many cases to use with the CPAP Hoods. It's very disappointing that in the current climate this incorrect information is circulating. Our focus as a company is to be able to supply the hospitals that require these and many other vital products, and we are making every effort to ensure we can do so."

There’s a bit more to the story that we published earlier this week about the hospital in Italy that 3D-printed medical valves for its ventilators. Located in Chiari in the northern part of the country, which has been especially hard hit by COVID-19, the hospital was facing a shortage of those valves and the supplier was unable to meet demand. Lives were at stake, so members of the community came together to craft a solution via 3D printing. According to several media reports, the manufacturer of the original valves has threatened to sue for patent infringement.

When Cristian Fracassi, founder of Italian startup Issinova, found out about the shortage at the hospital, he contacted the OEM requesting a blueprint for the device. The OEM reportedly declined and then threatened to sue Fracassi if he went ahead, which he did by reverse engineering the original valve and printing it for immediate use. By all accounts, this saved some lives.

The original valves supplied by the OEM, who has not been named in the articles I have seen, carry a sticker price of around $11,000, while the 3D-printed replacement part costs about $1 to make, according to Verdict Medical Devices. As you can imagine, this alone has stirred outrage online and in the media. “No good deed goes unpunished” is a common theme.

Speaking to various media, Fracassi has said that lawyers are looking into the matter. “I am not dealing with it personally, because I prefer to devote myself to [the 3D designs],” he said according to Verdict Medical Devices. “There were people in danger of life, and we acted.” He has also stressed that he has no intention of profiting from this and will not use the designs or product beyond this emergency.

I know that the cost of a seemingly simple plastic part can seem outrageous to someone who is not familiar with the process of designing and developing that part, shuttling it through the regulatory system and manufacturing it under strictly controlled conditions. There is a cost to that. I don’t know if $11,000 is a reasonable cost for this particular part — the pricing of medical products is a bit of a dark art, and what purchasing organizations and hospitals actually pay may be a fraction of the list price. I will also say that the medical device company threatening legal action is within its rights to protect its patent. And, yes, there are possible unintended consequences to using a replacement part that has not gone through the appropriate quality control and regulatory process. Still, I’m rooting for the little guy on this one.

We are all being asked to accept tremendous changes to the way we live our lives to try and flatten the curve of this pandemic. In a life or death situation like the one at that Italian hospital, companies need to take a deep breath and act like human beings. We’re all in this together — give your legal team a rest and focus on saving lives by any means necessary.