At the Design and Manufacturing show in Minneapolis last week, Myst creator Chuck Carter spelled out the future for Virtual Reality: content.

Pokémon Go may be a peek into the future of Virtual Reality (VR), but VR technology and content still has a ways to go before it gets adopted on a large scale. The on-again, off-again story of VR will ultimately be answered by content, and that content will come from the billions of dollars that are getting pumped into VR. That was the message from Chuck Carter, chief creative officer and founder of Eagre Games, in his keynote address at the Design and Manufacturing show in Minneapolis last week (pictured, right).

Carter has a deep reputation in the game world as one of the creators of Myst -- the spooky-yet-intriguing video game from the early '90s. These days he’s putting all his chips on VR. Yet he admits VR has yet to catch on in a decisively commercial manner. “It’s been a challenge to see what we can do with this new technology and to see if it’s here to stay,” said Carter. “VR is always going to be the next big thing -- then we just see it go away.”

For Carter, the tipping point will eventually be content. “What can we do with VR? Content is important. Myst was a slideshow. We had 2,500 images,” said Carter. “Now we can do it in real time, and the quality is a hundred times better than Myst. We can create a world that looks real.” 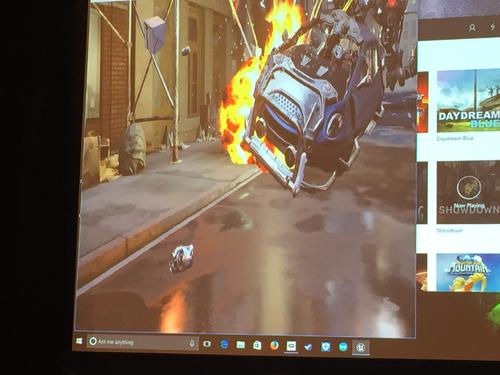 Here’s a Virtual Reality image demonstrated at the Design and Manufacturing show in Minneapolis.

Carter isn’t sure what hardware will eventually win out for VR. Pokémon only requires a smartphone. Other VR hardware requires bulky headsets. He sees promise in the trimmed-down Magic Leap. “Magic Leap is going to be something that could change VR in its technology,” said Carter. “It projects an image on the eye that appears to the naked eye to be totally real.”

Augmented Reality Is Already on a Successful Path

As for Augmented Reality (AR), Carter believes the technology is already on the road to acceptance and successful adoption. “Augmented Reality is an extra layer of reality on top of reality. AR is where the VR-type applications will come in for engineers and architects,” he said. “With AR, you can show how to take an engine apart. You see the entire engine and the AR program walks you through the process, taking you one step at a time.”

Carter sees a wide range of uses for AR that will ensure its success. “In a retail store, you can use AR to show you what you have left in stock and where to find it,” he said. He also sees possibilities for AR in the medical profession, likening the body to a jet engine. “The body is a mass of pumps and filters, and Augmented Reality lets you know where things are,” said Carter. “AR will also be used in the operating room and for taking medicine into rural areas.”

For VR, Carter sees a promising future even as he concedes the breakthrough hasn’t happened yet for consumers. “For me, to create a world you can go and play in is a dream come true. You can actually take an idea and put it in a form that other people can play in,” he said. “With the technology around now, you can make it so real. This will open up content creation beyond what we’ve been able to do in the past.” 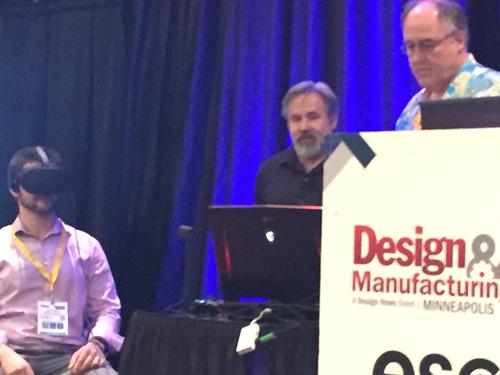 Chuck Carter demonstrated Virtual Reality at the Design and Manufacturing show in Minneapolis.

As for the downside, Carter thinks it may be a challenge for users to straddle Virtual Reality and actual reality. “If there is a downside, it’s that these games should have an alert system so people don’t walk into a telephone pole like they’re doing with Pokémon Go,” said Carter. “When you get a cool environment you can get lost in it.”