Magic Arms provides plastic, 3D-printed devices that help children who’ve lost the use of their arms due to neuromuscular disorders regain movement

We’ve already told you about Enabling the Future, which 3D prints superhero-like limbs for kids, and Andiamo, which uses 3D printing to develop custom orthotics for children. Now another worthwhile effort called Magic Arms is providing plastic, 3D-printed devices that help children who’ve lost the use of their arms due to neuromuscular disorders such as muscular dystrophy regain that movement. 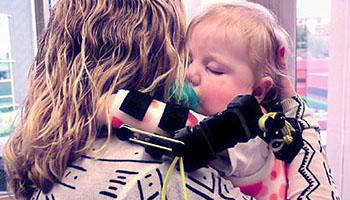 Three-year-old Emma wearing her “Magic Arms,” 3D-printed plastic devices that helps her move her arms normally despite her neuro-muscular deficiency.
(Source: Magic Arms for the World)

Magic Arms started with a 3-year-old Delaware girl named Emma who couldn’t lift her arms, said Tom Kramer, president and CEO of Kablooe, a medical device design firm and one of Magic Arms’ founding organizations. Emma’s plight inspired Tariq Rahman and Whitney Sample, who were working at a local hospital in Delaware at the time, to replace a metal robotic exoskeleton called WREX that Emma was using to move, but wasn’t suiting her very active needs. Instead, they designed 3D-printed plastic devices, which the 3-year-old dubbed her “Magic Arms.”

The name stuck, and those inspired by Emma’s story eventually formed the Magic Arms for the World Organization — where Sample now works — to help design and distribute similar arms for other children who need them to lead the normal, active lives they deserve, Kramer said. Most instrumental in the creation of the organization was Eric Jenson, now president of Magic Arms and owner of Jenson Studios. After making a video for Stratasys about Emma’s story, Jenson contacted Kramer about how they could distribute these arms to more kids, thus launching the project, Kramer said.

As with other projects that use 3D printing to develop prosthetics or other assistive devices that kids can wear, this type of fabrication is a perfect fit because it helps those designing and developing the devices to do so at a low cost and in a way that can accommodate the rapid growth of children. “3D printing allow us to create new parts quickly for kids as they grow,” Kramer said. “It has also allowed us to experiment with differently shaped parts and test them.”

Magic Arms is currently working to serve the needs of children who could benefit from the use of the device. To acquire it, families can fill out a form on the organization’s website.

The project is setting up regional distribution centers to improve access to the device. Stratasys is supporting these centers by donating the necessary 3D printed parts—a gesture that will offset half the cost to families who need the arms but cannot afford them.

“The feedback is life changing for these kids,” Kramer said. “When they see what they can now do, their eyes light up and their parents' eyes tear up.”

But there is still more work to be done, including more design and development to improve the way the arms work, Kramer said. “We need to make them better,” he said. “They need to have better functional range and be slimmer.”

Magic Arms is currently accepting donations via the organization's website and has also launched an IndieGoGo campaign. Crowdsourced funds will go toward working on a device redesign, setting up more care centers at hospitals to distribute the device worldwide, and helping fund kids who can’t afford the arms.