People who've lost the ability to speak get frustrated by not being able to vocally express their thoughts. Now a group of researchers at Loughborough University in the UK have leveraged mechatronics along with pattern-recognition software to help give back speech abilities to them with a novel device that can turn breath into words.

David Kerr, senior lecturer in the School of Mechanical and Manufacturing Engineering, and Kaddour Bouazza-Maroof, who is involved in mechatronics in medicine, developed the device, which they hope will bring back the art of conversation for sufferers of severe paralysis and loss of speech. Dr. Atul Gaur, a consultant anesthesiologist at Glenfield Hospital, near Leicester, also is working on the project.

The prototype Augmentative and Alternate Communication, or AAC, device analyzes changes in breathing patterns and converts these so-called "breath signals" into words using pattern-recognition software as well as an analog-to-digital converter. A speech synthesizer then reads the words aloud so others can know what the person wants to say.

Specifically, the device consists of a pressure transducer, signal processing circuitry, and a mask or nasal prongs or other medical interface device capable of resting near the nose and mouth of the user, Gaur told Design News in an e-mail.

The device is connected to a computer or a microcomputer with the necessary interface electronics using a USB cable. The signals are processed by software to recognize breath modulations that correspond to pre-defined words or phrases, he said. The device also can be configured to generate screen cursor movements in the same way as many standard AAC devices.

Patients with complete or partial loss of voluntary muscle control who can't make movements such as sniffing or blinking -- gestures that previous AAC devices used to create speech -- will now be able to "speak" using the device. 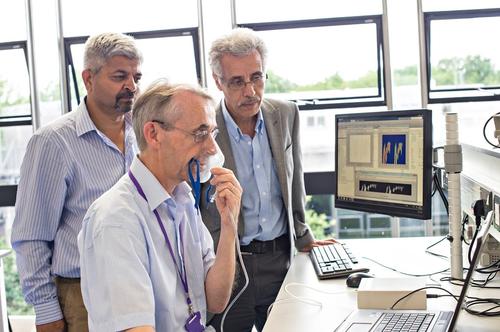 AAC devices already exist -- take, for example, the one famous physicist Stephen Hawking uses -- but this one is different in that it allows people with more several paralysis to use the device. Moreover, the system can learn and adapt words and vocabulary rather than have the user depend on the preprogrammed vocabulary of the machine, the researchers said.

"When it comes to teaching our invention to recognize words and phrases, we have so far recorded a 97.5% success rate," Kerr said in a press release. "Current AAC devices are slow and range from paper-based tools to expensive, sophisticated electronic devices. Our AAC device uses analogue signals in continuous form, which should give us a greater speed advantage because more information can be collected in a shorter space of time."

Researchers are planning clinical studies to test the device on volunteers and also on selected hospital patients in a local intensive care unit, Gaur said. "This will allow us to gain feedback and information to move to a more extensive study and further software development," he said. Eventually, the researchers hope to find a manufacturer for their device, Gaur added.

As they continue work on the device, they'll get some help moving forward from Loughborough mechanical engineering student Robert Green, who already has invented a similar device called the m(eye)DAQ, a low-cost digital letter board that allows people suffering from paralysis to communicate via eye blinks or finger movements.