A biobot developed by researchers at the University of Illinois has an infrastructure of human muscle cells that can sense and follow light.

Robots are becoming more human-like by virtue of their appearance and actions. But internally robots also can share human qualities, as evidenced by a so-called “biobot” developed by researchers at the University of Illinois that has an infrastructure of human muscle cells that can sense and follow light.

A team led by Rashid Bashir in the university’s Department of Bioengineering has created the robot, which they see having applications in health, sensing, defense, and the environment.

The robot is based on optogenetic skeletal muscle cells, which means they are genetically engineered to contract in response to blue light, Ritu Raman, a graduate student on Bashir’s team, explained to Design News. This is what researchers use to control the robot’s motion. “When we shine light on the muscle, it contracts, giving us control over biobot movement,” she said. 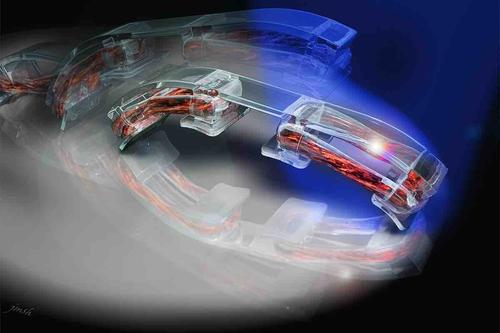 The team has been working on these type of robotics for four years, with a previous incarnation of the robot responding to an electric field instead of light. The latest version that responds to light has been in development for three years and offers motion-control improvements over its predecessor, Raman said.

“When you use an electric field, you make the whole muscle contract at the same time,” she told us. “Light control allows you to be more selective and only illuminate regions of the muscle tissue that you want to contract. This allows us to achieve more complex locomotive behavior, like 2D steering.”

Using light, researchers can steer the biobots in different directions, with the robots turning and walking toward the light stimulus. The biobots have two components -- in addition to the tissue-engineered skeletal muscle, they also include a 3D-printed skeleton made from a biocompatible polymer called poly ethylene glycol diacrylate, Raman said.

Like other robots, the biobots sense, process, and respond to environmental signals in real time, and could have a number of applications for use, particularly in the health-related field, Raman said. However, they also have an advantage over robots made from synthetic materials. “Biological tissue can do things traditional synthetic materials cannot do -- such as dynamic self assembly [and] self healing,” she said.

The team’s work was part of Emergent Behaviors of Integrated Cellular Systems project, which was funded by the National Science Foundation. The project received a five-year, $25 million renewal in fall 2015, allowing Bashir’s team to continue work on the biobots.

The team’s current focus is to incorporate different types of biological tissue, such as neurons and vasculature, into the robots for more complex functional behaviors. These include capabilities such as environmental sensing and internal processing, Raman said.