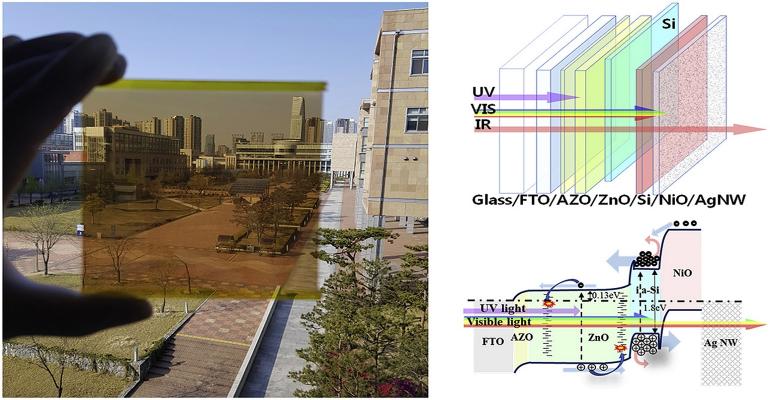 Researchers in South Korea have developed efficient transparent photovoltaics (TPVs) that potentially can be used to create windows that generate electricity even on low-light or cloudy days.
Novel photovoltaic devices like solar cells can generate energy even in cloudy conditions by using more of the light spectrum.

Sustainable buildings are eyed are key aspects of smart cities of the future, and one-way researchers have been trying to create them is through the use of windows that can also generate solar energy.

To that end, researchers in South Korea have developed a hybrid transparent voltaic  (TPVs) device with a unique design that makes it unusually efficient thanks to its combination of materials, which optimize its ability to generate electricity.

A team from Incheon National University developed the new TPV, a “dry” version of this type of device that uses metal-oxide semiconductors instead of solutions. Dry TPVs tend to be more reliable, eco-friendly, and cost-effective to fabricate, as well as more efficient at generating energy.

“Our research is essential for a sustainable green future—especially to connect the clean energy system with no or minimal carbon footprint,” explained Incheon Professor Joondong Kim, who led the research, in a press statement.

To create the hybrid device, Kim’s team used two transparent metal-oxide semiconductors with an ultra-thin layer of silicon placed in between, he said. This layer improves the metal-oxide TPV performance due to the improved carrier collection efficiency and extended light utilization for longer wavelengths, researchers reported in a paper on their work published in the journal Nano Energy.

“Our aim was to devise a high-power-producing transparent solar cell, by embedding an ultra-thin film of amorphous Si between zinc oxide and nickel oxide,” Kim said in a press statement.

Indeed, the combination of materials created a TPV with three key characteristics that make it optimal for use in smart windows, researchers reported. Their proof of the device is based on using it to operate the DC motor of a fan.

One is that it can generate energy from longer-wavelength light, which allows it to use a broader range of light spectrum than typical devices. The second is that it demonstrated efficient photon collection, researchers said.

The TPV developed by the team also showed the potential to generate electricity even under low-light situations, such as on rainy or cloudy days. This is especially important to long-term sustainability to use smart windows to generate the electricity needed to power buildings.

In addition to their potential for use in glass buildings, researchers envision other applications for the TPV design. The device also could be used to power electric vehicles as well as mobile devices such as smartphones and sensors.

The team plans to continue its work to improve the design by incorporating other materials—such as 2D semiconductors, nanocrystals of metal-oxides, and sulfide semiconductors—to improve its performance.