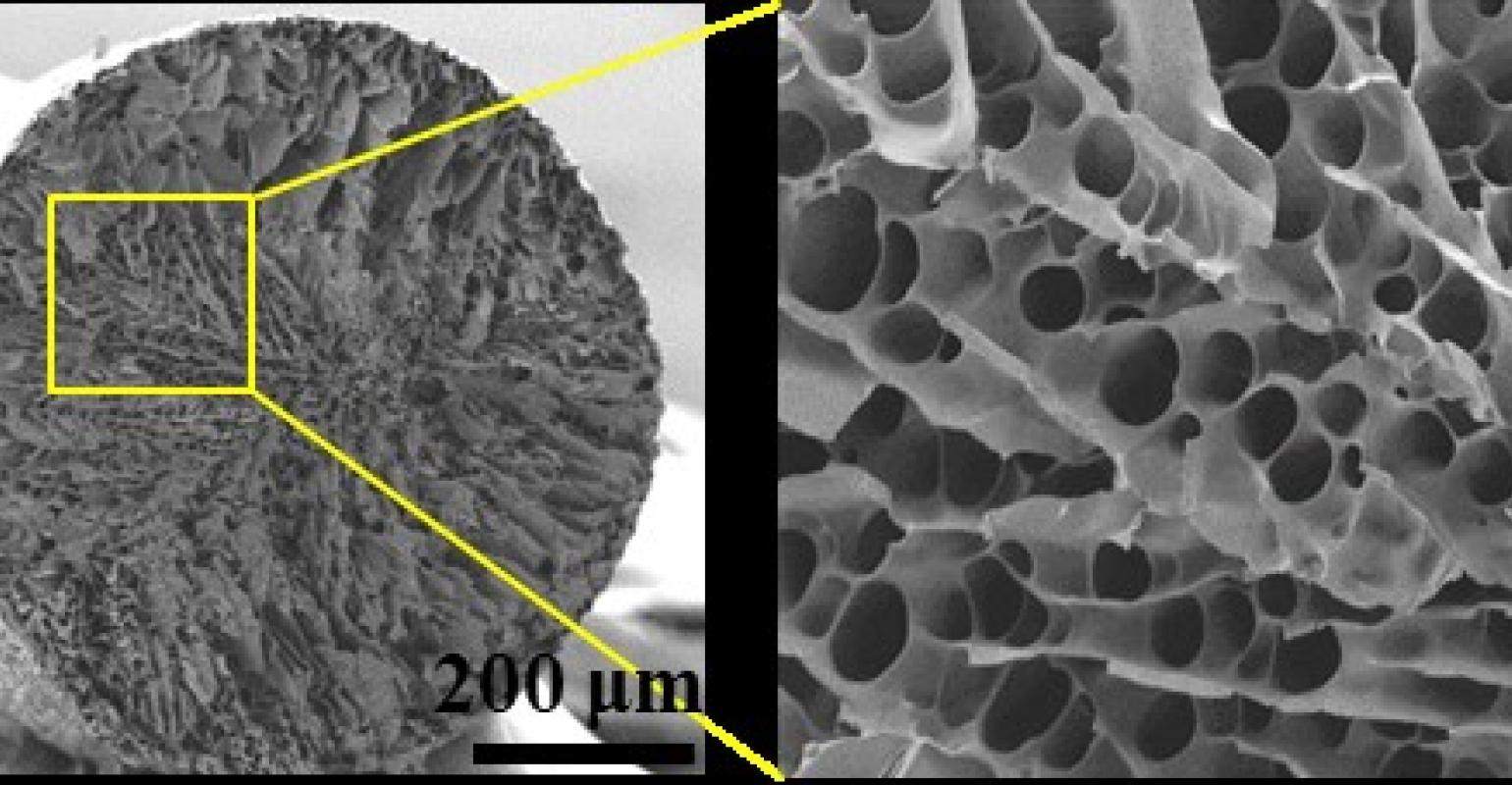 Researchers in China developed the material for potential use in temperature-regulating garments.

Researchers already have developed textiles that can be wired for electronic heating, as well as others that can use body heat to form shapes that conform to whomever is wearing them. Now, a team of scientists in China has developed smart textiles that can actually adapt to different temperature conditions, keeping someone warm when it’s cold and cooling down when the weather is hot.

A microstructured fiber (left) developed by a Chinese research team contains pores (right) that can be filled with a phase-changing material that absorbs and releases thermal energy. Researchers envision using the textile to develop temperature-regulating garments.

A team at Huazhong University of Science and Technology developed the textiles, which researchers said could one day be worn to reduce the costs of heating or air conditioning.

Led by Guangming Tao, a professor in the Wuhan National Library for Optoelectronics and School of Optical and Electronic Information at Huazhong University of Science and Technology, the team’s aim was to develop a textile that could be used to create practical garments for personal thermal management.

While attempts to develop such a material have been made, they were challenged by various issues, including working temperature, poor comfort, and weak reliability of the textiles, researchers said in an abstract for a paper on their work in the journal ACS Applied Materials & Interfaces.

What they managed to achieve with their design is “a skin-friendly personal insulation textile and a thermoregulation textile that can perform both passive heating and cooling using the same piece of textile with zero energy input,” the team wrote. “The insulation textile material is composed of biomaterial microstructured fibers that exhibit good thermal insulation, low thermal emissivity, and good dyeability.”

Researchers used both materials that naturally occur in nature, as well as synthetic materials, to create the textile. To fabricate the material, they freeze-spun silk and chitosan into colored fibers with porous microstructures. The latter is a material derived from the hard outer skeleton of shellfish such as shrimp.

The team then filled the material’s pores with polyethylene glycol (PEG), a phase-changing polymer that absorbs and releases thermal energy. After this step,  they coated the threads with polydimethylsiloxane to make sure that the liquid PEG wouldn’t leak out.

Researchers took the resulting fibers—which they found to be strong, flexible, and water-repellent—and wove them into a fabric that they integrated into a polyester glove.

To test the temperature reactivity of the material, a person wearing the glove placed his hand in a hot chamber with a temperature of 122 degrees Fahrenheit. The result of the test showed that the solid PEG absorbed heat from the environment, melting into a liquid, and cooling the skin under the patch.

In another test, the wearer of the glove placed his hand into a cold chamber with a temperature of 50 degrees Fahrenheit, which caused the PEG to solidify. This released heat and warmed the wearer’s skin.

Further development still needs to be done to optimize the material. However, there is a way forward for mass production, as the process for making the fabric is compatible with the existing textile industry and could be scaled up.

Octopus-Inspired Sensor Sticks to Both Wet and Dry Skin
Jun 19, 2019

These shape-shifting textiles are powered by body heat
Nov 21, 2019