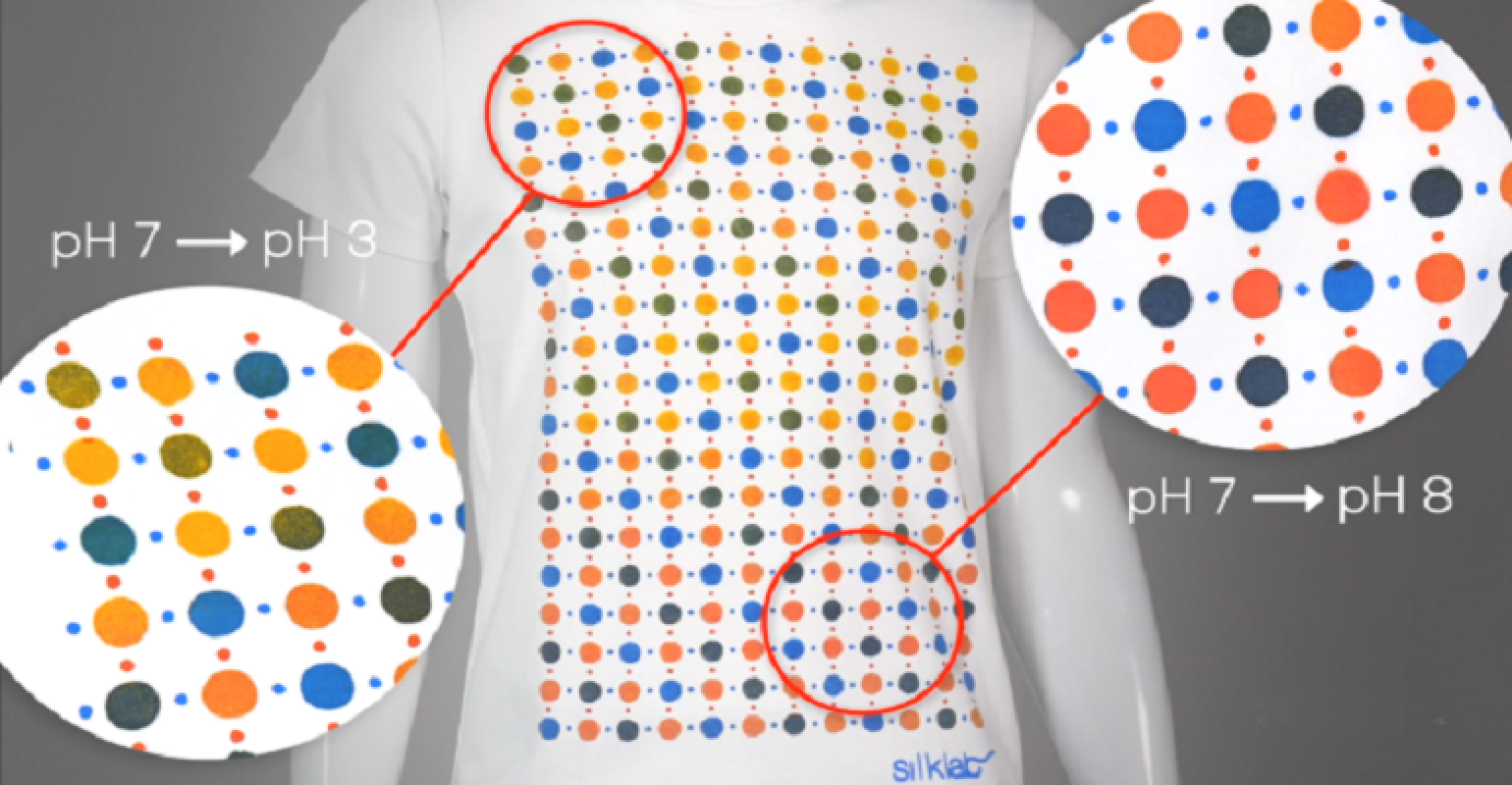 A T-shirt screen printed with pH-sensitive bio-active inks can provide a map of pH response on the wearer. Variations of bio-active inks can detect other molecules released by the body, or in the surrounding environment.
Biomaterial-based ink allows for screenprinting of garments that can detect the health of individuals and even possible virus infection.

Researchers have developed biomaterial-based inks that can be used to create textiles that are reactive to both internal and external stimuli to provide various types of health monitoring and even potentially detect virus infection on clothing.

A team of scientists at Tufts University developed the inks, which respond to chemicals released from the body in fluids like sweat as well as other environmental elements by changing color.

The inks can be used in screen-printing processes to fabricate various textiles, such as clothing, shoes, or even face masks to provide wearable sensing devices, said Giusy Matzeu, a research assistant professor of biomedical engineering at Tufts School of Engineering and one of the researchers on the project.

“The screen-printing approach provides the equivalent of having a large, multiplexed arrangement of sensors covering extensive areas of the body if worn as a garment, or even on large surfaces, such as room interiors,” she said in a press statement.

Researchers can use the sensing textiles together with image analysis, to “obtain a high-resolution map of color reactions over a large area and gain more insight on overall physiological or environmental state,” Matzeu said.

The team believes that the technology could be extended to track environmental factors as well, such as air quality, or support environmental monitoring for epidemiology, including in situations such as a pandemic.

Indeed, the printed garments could be used to detect a wide range of biological conditions, molecules, and, possibly even pathogens over the surface of the body using conventional garments and uniforms, researchers said.

The active ingredients in the new solution are silk-based inks that are biologically activated, researchers said. They created the inks by embedding what is called “reporter” molecules—such as pH-sensitive indicators, or enzymes like lactate oxidase, which indicate levels of lactate in sweat. These materials can be used to indicate skin health or dehydration, or levels of fatigue of the wearer, respectively, they said.

In addition to these bio-inks for health monitoring, researchers said they also can create other inks by modifying their silk-fibroin protein with active molecules such as chemically sensitive dyes, enzymes, antibodies, and more. When the reporter molecules are embedded within the silk fibroin, they can become shelf-stable, while on their own they can be unstable.

To create the inks for screen-printing, researchers combined them with sodium alginate, which is a thickener, as well as glycerol, which plasticizes the ink for printing. In this way, the inks can be used just like any other that is compatible with the screen-printing process, extending their application beyond garments to wood, plastics, and paper, researchers said.

The textiles or other objects designed using the inks are most effective when used in tandem with camera-image analysis that could scan garments or other materials to collect more precise information on both quantity and high resolution, sub-millimeter mapping than merely the color visual cues, they added.

Aside from medical applications, researchers believe their work can also apply to more creative endeavors, something that architect Laia Mogas-Soldevila—a recent Ph.D. graduate at Tufts in the lab of Professor Fiorenzo Omenetto, the leader of the research—explored.

Mogas-Soldevila and a team fabricated tapestries that they put on display in interactive exhibitions in various galleries and museums. The work allowed visitors to spray different, non-toxic chemicals onto the fabric and watch the patterns transform in real-time, she said.

“The engineered inks open up a new dimension in responsive, interactive tapestries and surfaces, while the 1,000-year-old art of screen printing has provided a foundation well suited to the need for a modern high resolution, wearable sensing surface,” Mogas-Soldevila said in a press statement.

Elizabeth Montalbano is a freelance writer who has written about technology and culture for more than 20 years. She has lived and worked as a professional journalist in Phoenix, San Francisco, and New York City. In her free time she enjoys surfing, traveling, music, yoga, and cooking. She currently resides in a village on the southwest coast of Portugal.