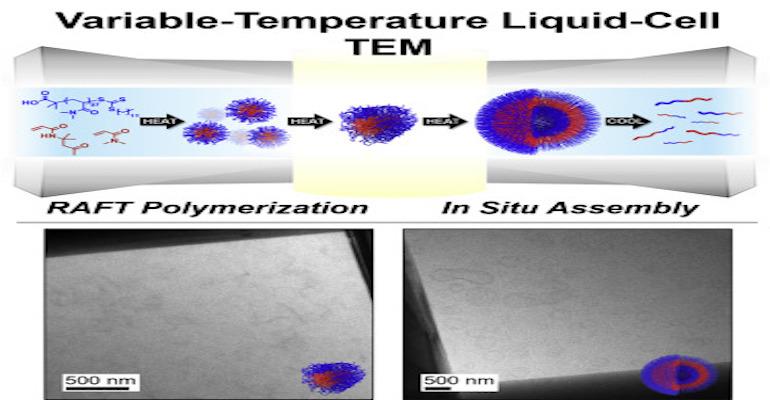 Researchers have developed a new process that might unlock some of the mysteries of designing the future of “smart” materials.

Scientists at Northwestern University and the University of Florida developed a new microscopy method that gives researchers a view into the polymerization process that occurs in material science to create nanoparticles with unprecedented capabilities.

The method gives them the ability to see the building blocks of “smart” materials being formed at the nanoscale, paving the way for the development of novel solutions for clean water, medicines, and other applications, they said.

“This research opens the door to the observation of materials that can sense their environment,” Nathan Gianneschi, a Northwestern professor of chemistry, materials science, and biomedical engineering, told Design News. He collaborated with Brent Sumerlin, a professor of polymer chemistry at the University of Florida, on the work.

The method allows scientists to visualize this class of polymerization in real time, at the nanoscale, which has never been done before, he said. Now they can see the reaction taking place and the formation of nanostructures, which will inform them of how to take advantage of their possibilities, Gianneschi said.

The Potential for Nanoparticles

Dispersion polymerization is a common scientific process used to make medicines, cosmetics, latex, and other items, typically on an industrial scale. “Polymer chemistry is responsible for a huge array of materials that we interact with on a daily basis,” Gianneschi told us. “All the plastic around you was made in that way.”

At the nanoscale, polymerization works slightly differently; there it can be used to create nanoparticles with unique and valuable properties, he said.

Nanoparticles have a lot of potential for forming materials with both less of an impact on the environment but also with unprecedented capabilities to solve problems, such as to provide targeted medications inside the human body, he said.

“We aim to develop new kinds of polymer-based materials that can switch and change their structures over time in response to their environment, Gianneschi told Design News. “To make new materials like this, we require new methods for examining those structures as they change in time.”

While scientists already are working with nanoparticles and experimenting with their application, they have had challenges in scaling up production. A technique called polymerization-induced self-assembly (PISA) has been useful, but the molecules’ behavior during this process has proven difficult to predict for one simple reason: Scientists were unable to observe what was actually happening.

To resolve this issue, Gianneschi and his team used transmission electron microscopy (TEM), which is capable of taking images at a sub-nanometer resolution. Typically, however, TEM doesn’t handle chemical reactions well and is used primarily with frozen samples, he told us.

“It is a high-resolution method, with capabilities that include peering inside living cells, or examining the structure of viruses,” Gianneschi explained. “But, it has largely been limited to the observation of static, or fixed structures.”

However, researchers found a way to solve this problem by using a liquid-phase TEM approach, or “Lab in the TEM,” which allows scientists to watch chemical processes as they occur when the outcome is a nano or microscale phenomenon,” Gianneschi told Design News.

“We insert a solution ‘cuvette’ into the microscope instead of just a flat surface with the sample on it,” he told us, describing the process. “That lets us look at materials that are moving around, and are fully solvated. This opens the door for literally watching nanomaterials form. If you can see how something forms, you can understand how to change, and alter, and optimize it.”

In addition to pharmaceuticals, the method can be used to help develop advanced materials for the cosmetic industry, among others, Gianneschi said. It also can be applied more broadly to endeavors in structural biology and materials science, he said.

While researchers developed materials that responded to temperature as a stimulus for forming and changing over time, the team’s next steps will be to “introduce a whole range of chemical and biological stimuli,” Gianneschi told Design News.

“We believe we can now start to study processes relevant to the behavior of capsules that come closer and closer to those that define living systems,” he said.