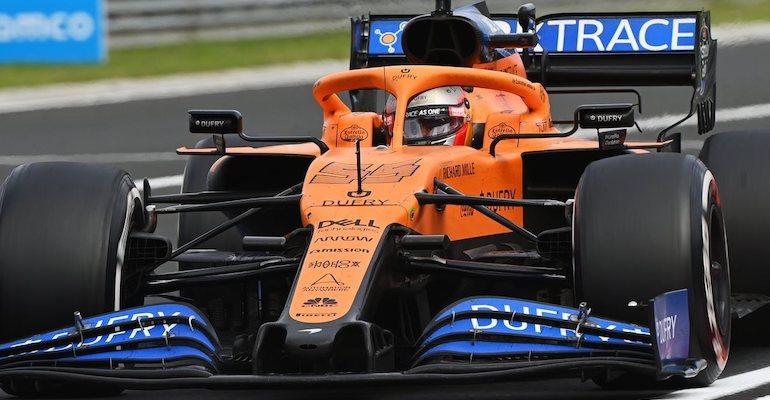 The McLaren MCL 35
McLaren F1 is partnering with supplier Bcomp to turn flax into a replacement for racing's gold standard material, carbon fiber.

In 1981, the McLaren Formula 1 team was the first to apply the aerospace fighter plane practice of using carbon fiber to replace aluminum in creating the chassis. The McLaren MP4/1 was met by skepticism in the paddock that season, but carbon fiber was quickly adopted by all of the F1 teams.

Now, McLaren wants to start replacing carbon fiber in some parts of its F1 cars with a new organic composite developed by Swiss natural fiber supplier Bcomp Ltd. Carbon fiber accounts for 70 percent of an F1 car by weight, but Bcomp’s renewable natural fiber material is lighter still. It also has the advantages of being cheaper, stronger, and more vibration dampening, which are all appreciated benefits.

The first part the partners have created is the custom-fitted seat for drivers Carlos Sainz and Lando Norris. This is a good starting point because the seat is not a stressed part of the car in normal racing conditions. Using Bcomp’s natural flax fibers in place of conventional carbon fiber results in a 75 percent lower CO2 footprint for the part.

“For decades, F1 has been an innovation lab for technology that has transformed not just motorsport, but the automotive industry and beyond,” adds McLaren F1 Technical Director James Key. “The sport must continue down the road of getting to an increasingly environmentally friendly set of conditions, and our development and application of natural fiber composites is an example of how we’re accelerating this journey, as well as the ongoing evolution towards cleaner mobility.” 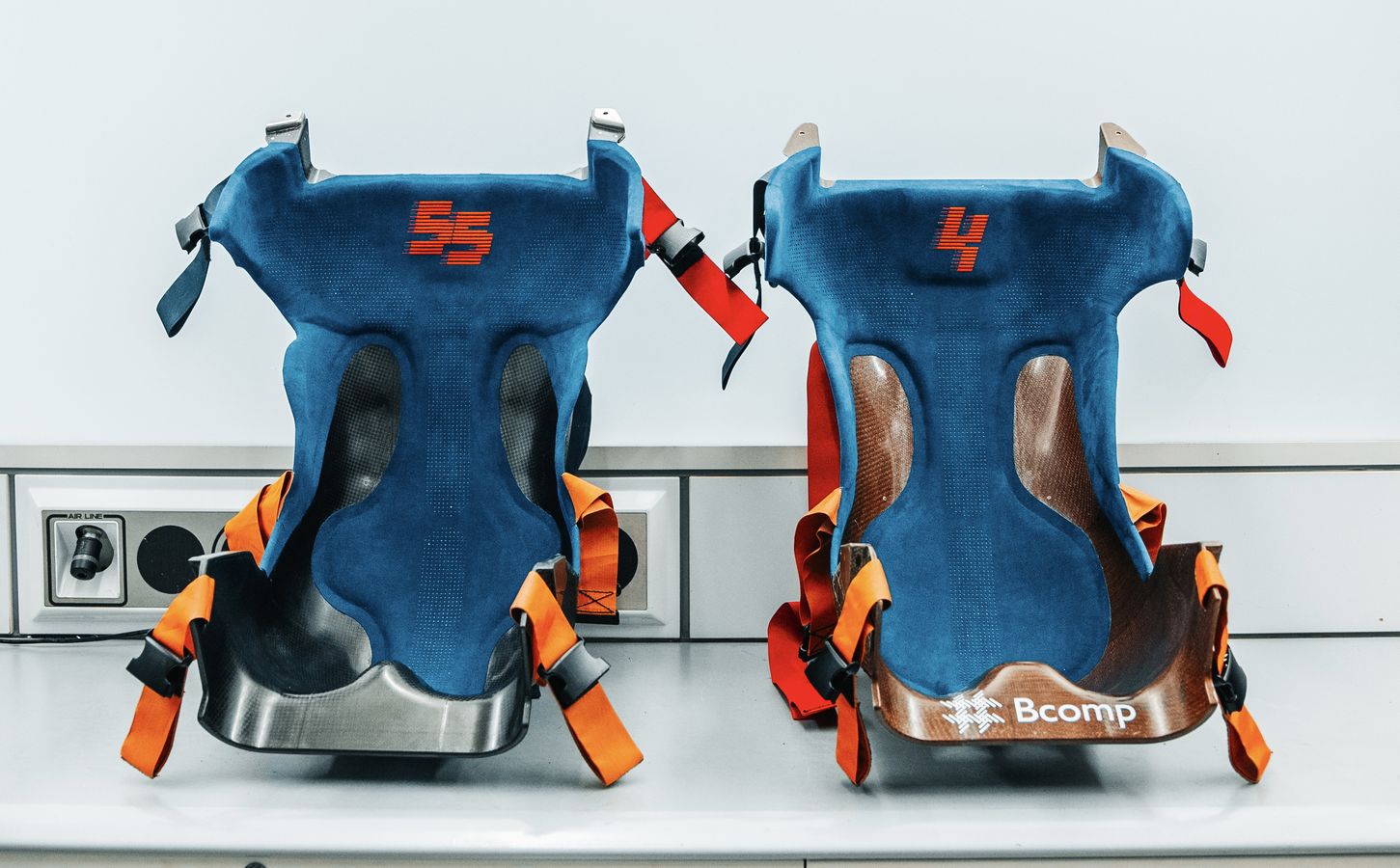 “Sustainability and decarbonization is a global issue, and it is fantastic to see motorsport embrace carbon alternatives, paving the way for widespread adoption within large-scale mobility applications,” agreed Bcomp CEO and Co-Founder Christian Fischer.

Flax is normally used to make linen fabric. It is especially appealing as an organic source of material because as a crop that is used to rotate in place of food crops in fields, it doesn’t displace food growth.

Bcomp spins the flax into yarns that are the basis of its powerRibs three-dimensional backing structure and its ampliTex reinforcement fabric. Together, these replace the carbon fiber cloth that is normally used.

Flax is 9 percent lighter than carbon fiber and has five times the vibration absorption characteristics. Today’s F1 rules budget 176 lbs. (80 kg.) for the driver and seat, so any amount below that amount for the combination can use strategically placed as ballast elsewhere in the car. Meanwhile, the flax soaks up vibration 250 percent better than carbon, improving driver comfort and potentially aiding their focus on driving. 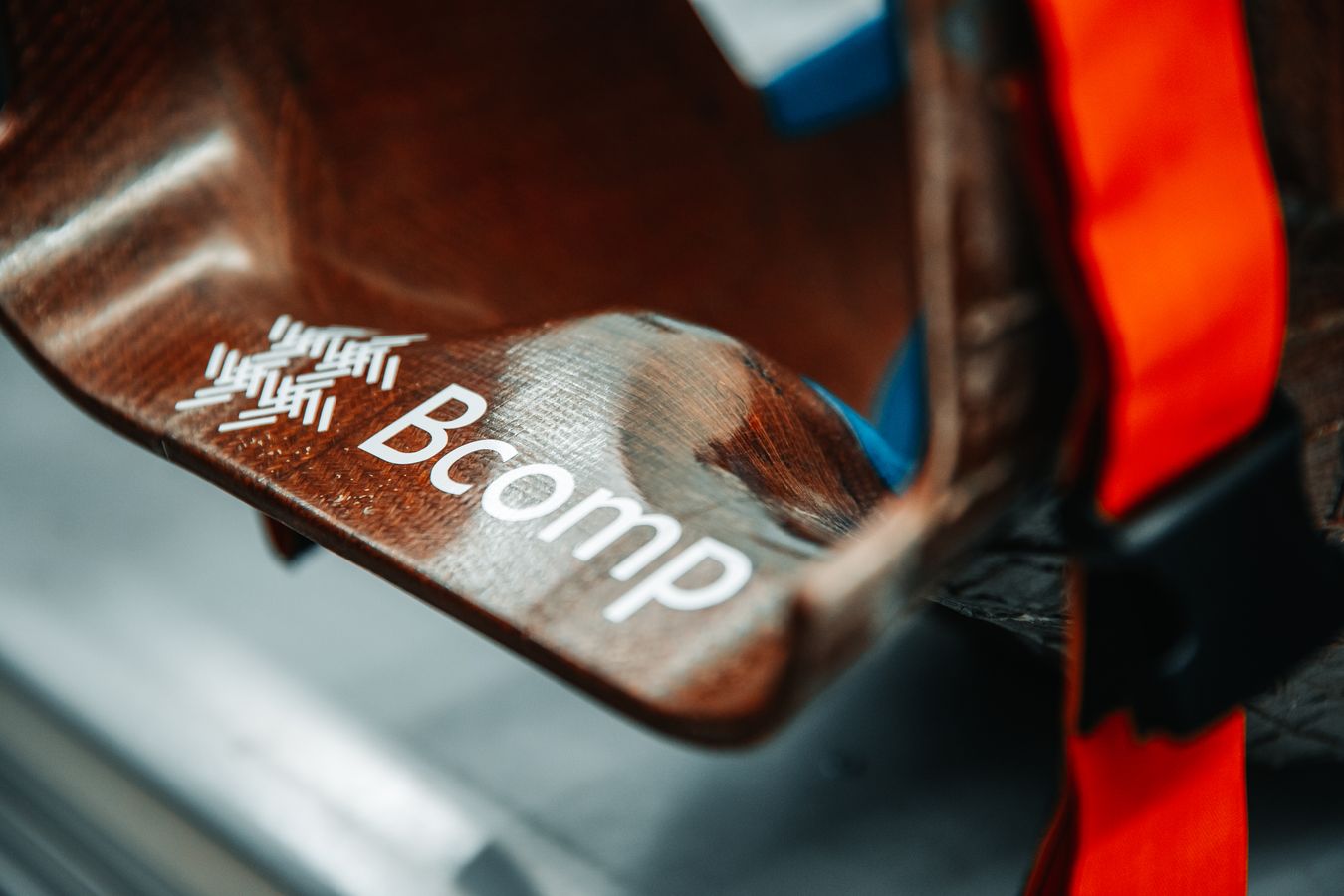 Close-up of the Bcomp natural fiber seat for McLaren F1.

“With the introduction of the new regulation in 2019, the seat now forms part of the driver’s weight budget, so it’s over-engineered as a result,” explains McLaren F1 Principal Composites Engineer Steve Foster. “And with Carlos and Lando weighing in at 72 kg and 68 kg respectively, there’s plenty of scope to do that. It meant that, if we needed to, there was margin to use additional bio-composite material to ensure sufficient strength and stiffness in this safety-critical component.”

McLaren tested prototype flax seats produced by Bcomp during pre-season testing and plans to deploy the final version of the seats during races this season.

“We believe this seat functions as a conclusive demonstration that our technologies are ready to compete in the top tier of motorsport,” said Fischer.

Another characteristic of flax makes it better-suited to some other parts on race cars too. Flax composites aren’t brittle like carbon fiber, so they don’t shatter on impact into tire-slicing shards that change the outcome of races when competitors run over debris and racing is halted for prolonged track clean up.

“While it still breaks, the softer debris remains attached to the main structure with the help of the powerRibs, which help dissipate the energy,” explained Fischer. This makes the material ideal for parts like front wing endplates and the floor.

Additionally, a spending cap set to take effect next season will have even well-funded teams pinching pennies. Bcomp’s flax fibers can cut costs by 30 percent compared to carbon fiber, according to the company.

“Where we see significant potential is in the non-critical, semi-structural areas of the car, such as the driver’s seat, as well as off the car,” says Fischer. “When used intelligently, the flax fibers reduce weight and cost, while maintaining and, in some cases, even improving performance. There are a range of possible applications beyond the car itself, including pit gear, truck panels, packing cases, timing stands, and mold tools.”

Bcomp’s flax products aren’t limited to expensive, small-batch racing parts. They also are used with a thermoplastic base layer for high-volume injection-molded parts such as interior pieces for production cars.

Flax can even help F1 teams by improving parts that aren’t even on the race cars themselves. The mold tools used to form the chassis parts are also normally made of carbon fiber because the material doesn’t expand during the curing process in the autoclave. Flax can serve the same purpose at a lower cost. 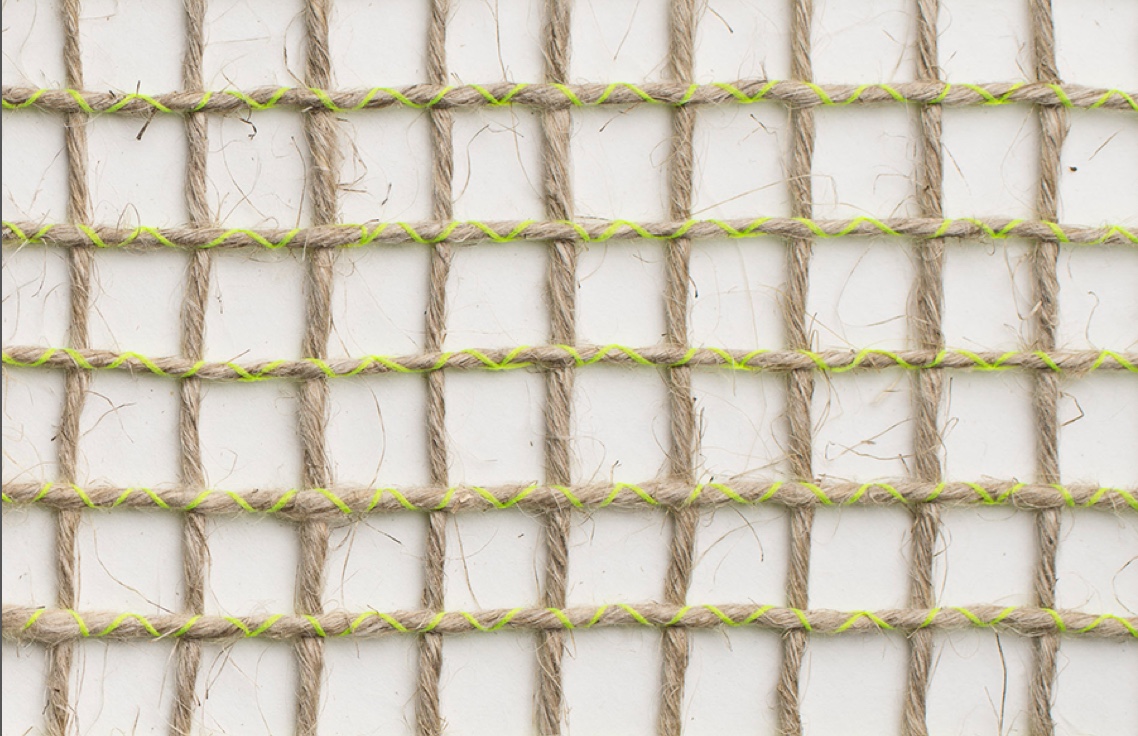 The Bcomp powerRibs supply 3D reinforcement to the back side of parts.

“This seat is the first step in the successful application of natural fiber composites in F1,” concluded McLaren F1 Team Principal Andreas Seidl. “By working with Bcomp we can identify other components that we can replace with a sustainable alternative that has equivalent weight and performance. There is no silver bullet in the race to be carbon neutral. Instead, we must continually evaluate every element of our cars and our operations to identify the ways we can improve performance, drive efficiency, and reduce environmental impact.”

It remains to be seen whether, once again, McLaren’s competitors will follow suit or whether they will be defeated by Bcomp’s spinning flax-into-gold technology like Rumpelstiltskin.