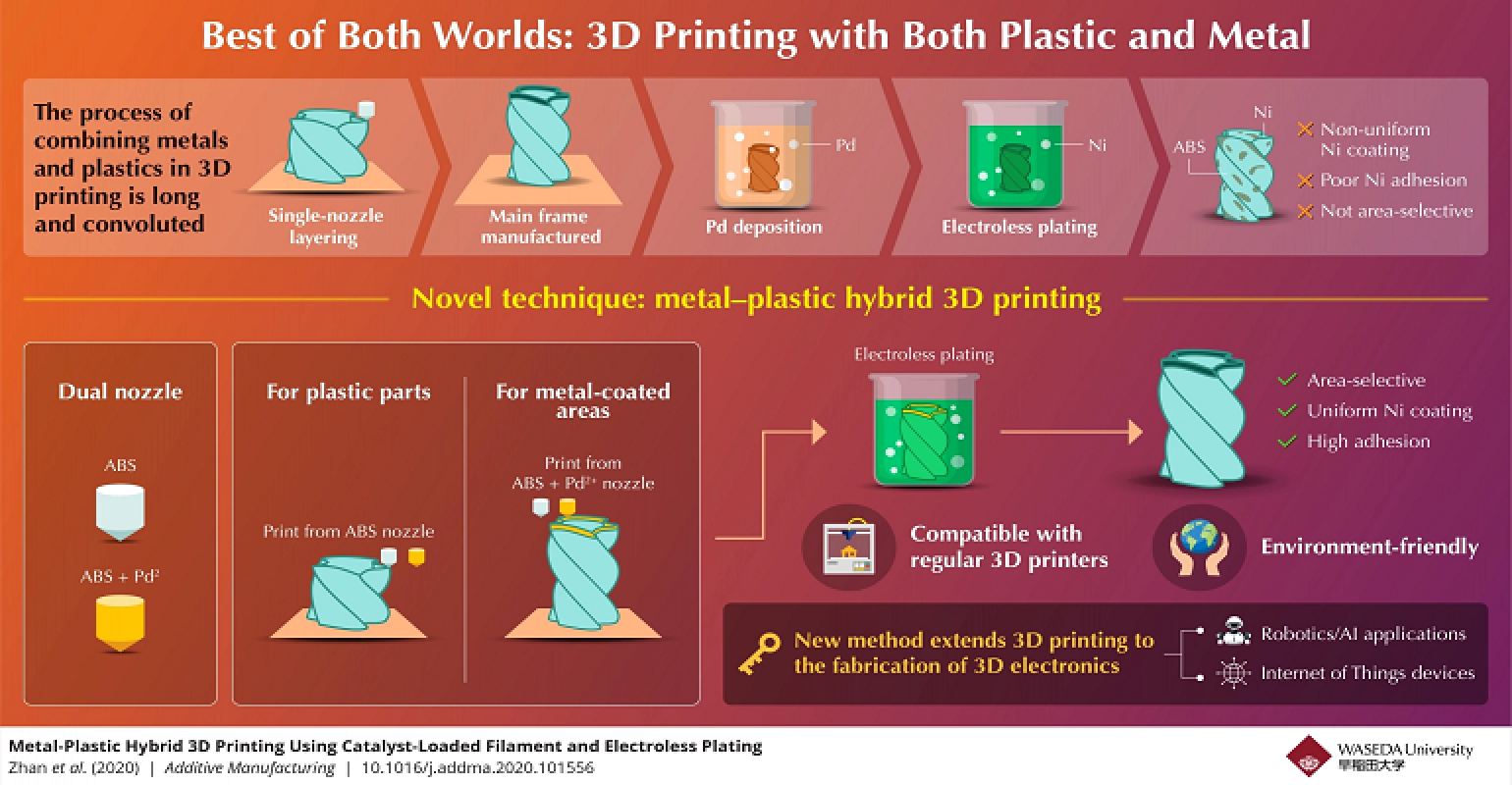 Researchers at Waseda University in Japan have developed a metal-plastic hybrid 3D printing technique that fabricates plastic objects with an adhesive metal coating on defined areas.
A dual-extrusion 3D printer allows for the fabrication of objects made of plastic with metallic coating in certain areas.

People can currently use 3D printers to create objects out of either plastic or metal, but typically it hasn’t been possible to use one machine to print using both materials at once because their melting points are very different.

Until now, thanks to researchers at Waseda University in Japan, where a team has developed a metal-plastic hybrid 3D printing technique that fabricates plastic objects with an adhesive metal coating on defined areas.

The approach, which uses a printer with a dual nozzle, paves the way for easier printing of electronics that can be used in robotic or Internet of things (IoT) applications.

“Even though 3D printers let us create 3D structures from metal and plastic, most of the objects we see around us are a combination of both, including electronic devices,” explained Waseda University Professor Shinjiro Umezu, who led the research. “Thus, we thought we’d be able to expand the applications of conventional 3D printers if we managed to use them to create 3D objects made of both metal and plastic.”

The approach the Waseda team used is different than the current method to add a metallic coating to 3D printed plastic parts, which submerges an already-printed part in a solution containing palladium (Pd) that adheres to the object’s surface. The part is then submerged in an electroless plating bath that, using the deposited Pd as a catalyst, causes dissolved metal ions to stick to the object.

While this approach, for all intents and purposes, works, it also has its drawbacks—the chief of which is that it produces a non-uniform metallic coating that adheres poorly to the plastic structure.

The new printer the team developed for plastic-metal printing has a unique dual-nozzle design that can push out two materials at once—one extrudes a standard melted plastic, acrylonitrile butadiene styrene, or ABS, while the other extrudes PdCl2, a type of palladium.

The method prints layers selectively using one nozzle are the other, using the Pd to form only specific areas of the object. Like the commonly used method, it also uses electroless plating to finalize the plastic part with the metallic coating only on selected areas.

Researchers published a paper about their work in the journal Additive Manufacturing.

The team found a number of benefits to its method over the conventional way used to add metal to plastic 3D-printed parts, researchers said. One is that the adhesion of the metal coating is stronger than the other approach.

Another improvement is that the technique does not require any type of roughening or etching of the ABS structure to promote the deposition of the catalyst due to the direct loading of the Pd in the raw material of the part. This aspect also has an eco-friendly effect, as eliminating some steps to the process also eliminates the use of toxic chemicals.

The approach also is compatible with existing fused filament fabrication that already is in use with current 3D printers, making it easy to integrate into existing systems.

Additive Manufacturing Growth and the Impact of COVID
Aug 06, 2020