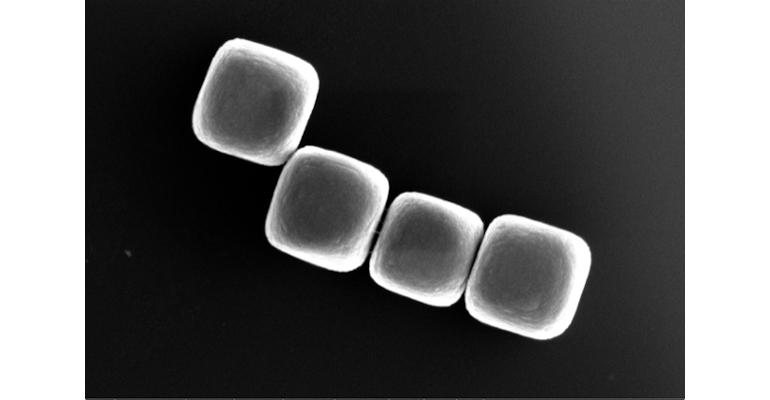 Researchers have found a way to create new synthetic materials out of tiny particles of glass that can adapt their properties to their environment, work that paves the way for new directions in materials design, they said.

A team led by Professor Laura Rossi at TU Delft in the Netherlands collaborated with researchers from Queen’s University and the University of Amsterdam to create building blocks for new materials out of particles called colloids, they said. Colloids, which are a few nanometers to a few microns in size, are unique in that they can have different properties depending on the material of which they are made. In this way, they can behave like atoms and molecules, though with slightly less strong interactions, Rossi noted.

“That makes them promising building blocks for new materials, for example for interactive materials that can adapt their properties to their environment,” she said in a press statement.

Colloids are shaped like cubes and, if left alone, assemble themselves into simple structures like distorted cubic and hexagonal lattices. What researchers did was to combine groups of the particles and combine them into bigger building blocks.

In this case, rather than self-assembling into the usual structures, researchers ended up with a different final structure that had material properties unlike previously synthesized building blocks made from colloids, Rossi said.

“From a chemistry point of view, we always focus on how we can produce a certain type of colloid,” she said in a press statement. “In this study, we’ve shifted our focus to: how can we use the colloids that are already available to make interesting building blocks?”

While the change in structure may seem minor, Rossi said the work is important to the goal of researchers to design complex colloidal structures on demand.

“For possible applications, we need to have procedures that can be scaled up, which is something that will be hard to achieve with most currently available approaches,” she said in a press statement.

Understanding the results of their research was a team effort between researchers working with Rossi and another team of Professor Greg van Anders from Queen’s University. Once Rossi’s team built clusters of colloids in the lab, they relied on van Anders’ group to to build the final structure out of pre-assembled clusters with a computer simulation.

This collaboration allowed them to realize what’s happening in depth as well as test the viability of their work in future applications, she said.

“In this case, we got very convincing results that we were understanding the design process well and that the resulting material can be useful,” Rossi said in a press statement.

The researchers published a paper on their work in the journal Science Advances. Now that they’ve developed new building blocks, scientists are beginning to envision materials that can be created from the work, which is dependent on the results they achieved, Rossi said.

The next step for the team will be to actually build the final material structure made from the groups of colloids in the lab, Rossi added.

“After seeing these results, I’m confident that it can be done,” she said in a press statement. “It would be great to have a physical version of this material and hold it in my hand.”