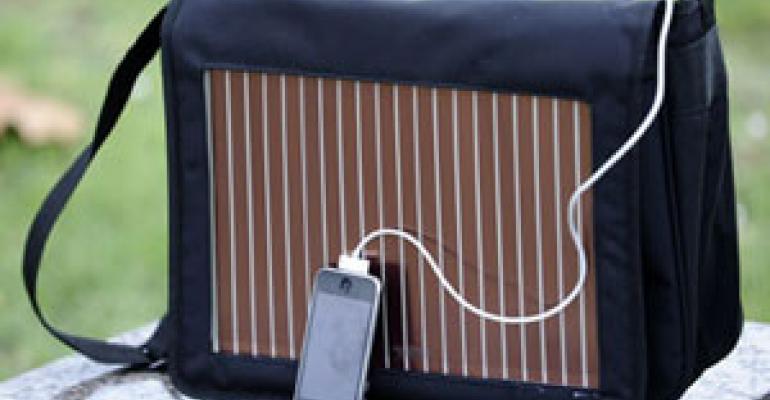 The race is on to commercialize photovoltaic cells made with conductive plastics.

A California startup announced last July that it had achieved a new world record for organic photovoltaic (OPV) cell efficiency: 8.13 percent. On Nov. 29, Massachusetts-based Konarka said it achieved an efficiency of 8.3 percent, breaking the record.

The new OPV records compare to 11 to 15 percent efficiency for traditional inorganic silicon photovoltaic cells in converting sunlight to electricity. The maximum recorded cell efficiency for crystalline silicon is 24.7 percent.

But, conductive plastics are considered an important part of the world's energy future because the cost of electricity from silicon photovoltaics is very high-roughly 10 times higher than fossil fuels such as coal and oil.

There probably will be plenty of room for growth in several new photovoltaic technologies. In 2010, global cumulative installed photovoltaic (PV) capacity grew by 40 percent, with compounded annual growth forecast at 20 percent.

Better Designs. Conductive plastics are flexible and are easy to bond to flexible substrates such as plastic and metal foils, creating opportunity for integrated, flexible applications. For example, mobile phones could generate their own power.

Costs. Relatively inexpensive plastic is used as the active material to convert solar energy into electricity. Only a few tenths of a micrometer of conductive plastics are needed to generate electricity.

Printing capability. Conductive solar cells can be printed in processes similar to printing on newspaper. The fabrication process is described as low temperature and environmentally friendly.

Photovoltaic cells contain a light-sensitive semiconducting material that starts the process of producing electricity. Today that material typically is silicon. OPVs generally use two materials, one acting as a donor that captures electrons from light (even indoor light) and the other acting as an electron acceptor. A charge transfer process then begins, creating electricity.

Solarmer Energy of El Monte, CA announced the efficiency record of 8.13 percent and in June 2010 the National Renewable Energy Laboratory (NREL) and Solarmer signed a cooperative research and development agreement to improve the lifetime of plastic solar cells.

Tests will be conducted with NREL's combinatorial degradation system, which compares the performance of up to 360 OPV devices in parallel under simulated solar conditions that accelerate the test results.

"Through this collaboration we hope to improve plastic solar cell performance and extend the cells' lifetime through the development of stable device architectures and packaging systems," said NREL senior scientist Dana C. Olson, who is the principal investigator on the collaboration project.

Solarmer's technology, which includes making electrically active plastics
in multiple colors, is representative of an explosion of research that is leading to optimism about organic photovoltaics.

To date, organic photovoltaics have been largely limited to charging consumer electronics because of their short lifetimes, lasting only a couple years, and low efficiencies (3 to 8 percent). One early application is to provide power at poolside umbrellas for laptop recharging that cost $10,000.

Research is focusing on increasing the lifetime and efficiencies for organic photovoltaics. Several companies hope to break the 10 percent efficiency barrier this year. Improving stability may be farther off.

"Konica Minolta positions the organic thin-film photovoltaic business as one of the most promising in the environment and energy field,next to the organic light-emitting diode (OLED) business, where our photographic film manufacturing technology is leading mass production," says Masatoshi Matsuzaki, CEO at Konica Minolta.

Konarka was an attractive partner because of its commercial product, Power Plastic, which is now being produced in a roll-to-roll process in New Bedford, MA. Power Plastic captures indoor and outdoor light and converts it into direct current (DC) electrical energy.

Power Plastic captures indoor and outdoor light and converts it into direct current (DC) electrical energy. The technology traces its roots to development of a way to process photovoltaic materials at relatively low temperatures, enabling the use of low-costpolymers as the top and bottom surfaces of the photovoltaic cell. The technology, invented by a team at UMASS Lowell, also enabled the photovoltaic cells to be manufactured at high speed using coating and printing technologies.

At the heart of Konarka's technology is a photo-reactive polymer invented by Konarka co-founder and Nobel Prize winner AlanHeeger. This material can be printed or coated inexpensively onto flexible substrates.

The newer applications for Power Plastic are coming from partners focused on building-integrated photovoltaics (BIPV) and other shade and structure applications. In one example, Arch Aluminum & Glass Co. is integrating Power Plastic into a wall structure at Arch's office building in Tamarac, FL. The solar panels will 1.5 kW of power to the facility.

"The purpose of this project is to test the performance and robustness of our solar panel solution for a curtain wall application with a variety of glass and window configurations under a wide range of environmental and insolation conditions,"says Terri Jordan, vice president of business development at Konarka. "The yielded data and information will guide our development of the first-of-its-kind vision application, a transparent, colored solar glass panel."

The current lifetime for Power Plastic is three-to-five years when exposed. If the conductive layers are protected with glass or plastics, its lifetimes are comparable to traditional solar cells.

In printed solar cells, sunlight is collected in the photoactive layer to create charge carriers. When voltage is applied to the device, these carriers are separated into positive and negative charges and then directed to the conductive electrodes (cathode and transparent anode) to create power. A hole transport layer improves extraction of positive charges from the photoactive ink by matching of energy levels to photo-active ink.

"Our current efficiency is just shy of 7 percent," says Mary Boone, director of ink business development for Plextronics. "From a goal perspective, we are targeting greater than 8 percent efficiency in the next year." The technology is pre-commercial and Plextronics provides inks in 50-liter batch sizes or less.

One potential indoor application for the ink is point-of-purchase displays that receive energy from fluorescent lighting.

"Working with our partners and customers, we've talked with major retailers and consumer goods companies in the U.S. who want to replace the traditional paper signage used in stores today with low-cost, animated point-of-purchase displays that are self-powered by OPV," says Boone. "Retailers don't want the ongoing cost and disruption of having to purchase and replace conventional batteries in these displays, so there is tremendous interest in using printable OPV as the power source for these new displays."

In another recent development, Plextronics says it has improved low-temperature processability of OPV. While previous industry standard techniques required a glass substrate to be annealed at temperatures at or above 110C, the proprietary method developed at Plextronics enables annealing at less than 65C. This new method allows use of less-expensive substrates, especially once the process is transferred to flexible substrates such as conventional plastic.

Conductive plastic photovoltaic technology is close, but not yet part of the design engineering toolbox on a practical level. But they may change in the next two to five years.
0 comments
Hide comments
Related