Home>Materials
Recent
Materials
Want a Job? Here Are 21 Hot Engineering Gigs for 2021
May 17, 2021
This Breathtaking Bugatti Hypercar Reveals its 3D Printed Secrets
May 17, 2021
Big Oil Mines Carbon Capture Technology to Mitigate CO2 Contribution
May 16, 2021
Extraordinary Glass Objects Now Possible Thanks to 3D Printers That Use Lasers
May 16, 2021
Super Soft 3D Printed Plastic Might Pass for Human Hair. Would You Wear it?
May 16, 2021
New Method Uncovers Mysteries of Design for Smart Materials
May 15, 2021
Can 3D Printing Become the Doctor's New Tool for Repairing Broken Bones?
May 15, 2021
MIT Student Turns Her Artistic Eye to Medical Device Design
May 14, 2021

'Slugbot' Is Frankensteined From Slug Parts and 3D-Printed Body

We've written about all kinds of walking, swimming, slithering, and crawling robots in Design News. We've even told you about bots that manage to fall over during major, highly anticipated field trials (aka the DARPA Robotics Challenge). But we haven't seen many robots that emulate Frankenstein's monster by combining organic animal parts with mechanical components. Until now.

Case Western Reserve University researchers have combined 3D-printed components made of a flexible polymer with actual body parts of a California sea slug. The "Eeww!" factor aside, using organic body parts was a very specific design decision to overcome the problem of finding an actuator to make the tiny robot move. Mechanical actuators aren't as safe as soft tissue, and in small scale robots like this one, just under 2 inches long, they tend to be rigid, not flexible. They also have a much lower power-to-weight ratio than organic versions like muscle cells, which carry their own fuel source in the form of organic nutrients. 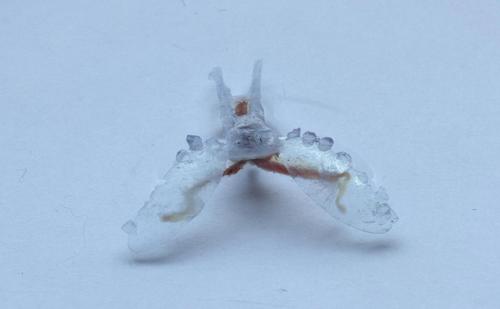 A sea slug's buccal I2 mouth muscle powers this biohybrid robot as it crawls like a sea turtle. The body and arms are made from a 3D-printed polymer.
(Source: Victoria Webster, Case Western Reserve University)

The sea slug body part chosen for the first version of the biohybrid robot came from the animal's mouth, the buccal I2 muscle. Although that's presently controlled by an external electric field, future revs of the robot will incorporate sea slug neuron and nerve tissue as a controller. In a real slug, these ganglia conduct signals to its mouth as the animal eats. They are also capable of more complex motion than is possible with human-made control, and can use either electrical or chemical stimuli to control nerves and make them contract the muscle.

A robot made of both mechanical and organic materials is more diversified, and can manage tasks different from those that either a human-made robot or an animal could manage, said Roger Quinn, professor of engineering and director of Case Western Reserve's Biologically Inspired Robotics Laboratory. The researchers envision swarms of these biohybrid robots finding the source of toxic leaks, or locating black box recorders on the ocean floor. Both of these tasks can take longer than the battery life of purely mechanical robots allow.

In the first rev of their robot, the team designed a 3D-printed polymer body and two "arms," which are naturally connected to the mouth muscle. When the buccal muscle contracts and releases, moving the arms back and forth, the robot moves. Early tests showed speeds of about 0.4 cm per minute. In future revs, ganglia could be trained to move the robot backward or forward in response to different signals. The team will also test new geometries for the body that produce more efficient movement, as well as completely organic versions.