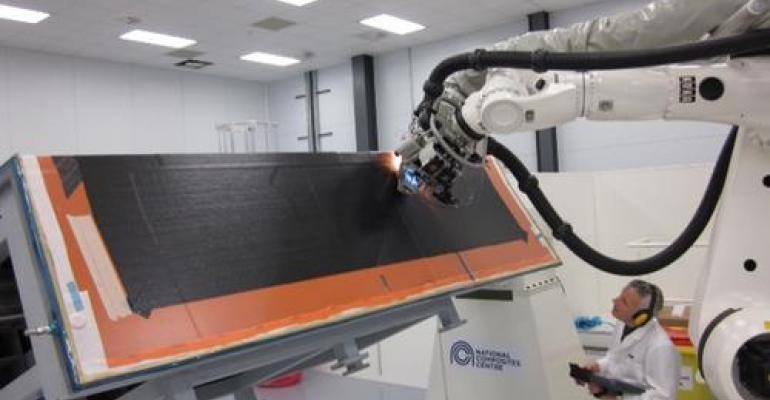 GKN Aerospace has become the first company in the UK to use one of the British National Composites Centre (NCC)'s new automated fiber placement machines. Automation of composite manufacturing in aerospace component production isn't entirely new, but it's still not widespread either.

The NCC's automated fiber placement system is a twin-headed, robotic machine that's expected to speed composites production by helping aerospace component manufacturers prototype more complex structures and work out any potential manufacturing kinks before buying their own machines. GKN's use of the machine is part of a UK-funded research program led by Airbus that focuses on next-generation super-efficient aircraft wings. 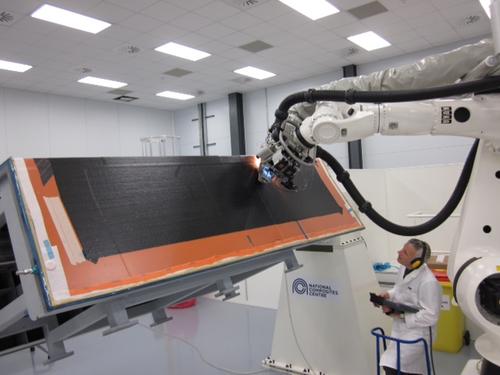 "With an order backlog of more than 4,400 aircraft and a projected growth of air travel demand of 45 percent over the next 10 years, research into high-volume and low-cost manufacturing is essential for Airbus to meet the future market needs," said Colin Sirett, head of R&T business development and partnerships for Airbus in the UK, in a press release.

Composites have traditionally been manufactured by hand, by laying up plies, also called ribbons. Hand layup techniques are expensive and time consuming, and produce variations in the finished product. More recently, automated tape layup has been widely adopted, but has generally been confined to smaller components and structures because it lays up only one tape at a time.

Automated fiber placement machines take automation one step further by controlling eight tapes at once, and by making it possible to apply them individually to components with complex profiles, such as wing structures. This speeds up manufacturing, but it also increases flexibility in the production of complex parts that use multiple integrated manufacturing techniques.

The NCC's machine has two robotic arms, each of which has an automated fiber placement head. The arms work both independently and cooperatively. Together, they can quickly lay up composite fibers in certain directions and also vary the thicknesses laid up to create highly accurate, repeatable composite structures. This method is expected to produce complex structures that meet required strength and stiffness specifications, while also wasting less material than conventionally produced components.

The program is part of the UK's Next-Generation Composite Wing development program, sponsored by the UK government's Technology Strategy Board. It is the largest project under the country's National Aerospace Technology Strategy. Aside from Airbus and GKN, other UK-based academic, public, and industrial consortium partners working on the program include Umeco, GE Aerospace, Bombardier, and QinetiQ.