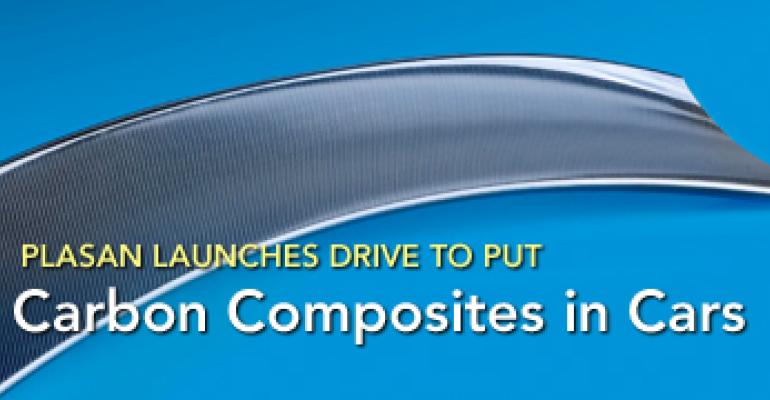 "The target of our research is to take us from 7,000 vehicle sets a year to 50,000 or 60,000 a year," says Gary Lownsdale, engineering manager for Plasan Carbon Composites of Bennington, VT. The company opened this year a new R&D center aimed at significant improvements in both process and materials technology.

"We're getting down and really trying to understand what happens in the curing process so that individual resins can be tailored for the process," says Lownsdale. The goals are to boost productivity, a chronic problem for any type of thermoset curing process, and to improve surface quality. The Plasan unit is the global leader in Class A surface carbon fiber parts.

Lownsdale says Plasan is trying to develop a new process that could make carbon fiber composites for automotive with thermoplastic resins. That would be an industry first, and require a new low-pressure process technology. Injection molding would not work. Composites are loaded with more than 50 percent levels of carbon fiber and their exact orientation is critical.

One of the big areas of development is in computer simulation. "We've found you can't go to one place and buy an off-the-shelf design guide for carbon components," says Lownsdale. "All of the pieces are out there. It's just that they haven't been pulled together and put in one place." Plasan is working with other companies actively developing carbon fiber composites, including those that make aircraft and wind turbine components.

The money for Plasan's development is coming from its parent in Israel, which produces military components made of carbon fiber.

A special grade of carbon fiber is made for automotive applications. For one, the resins are faster curing, allowing higher throughputs. "Also, you have to pay attention to dynamic conditions, as well as crush and energy absorption," says Lownsdale. "Often in aerospace, they're happy if they can do two parts a day. We need to do 200 sets a week."

Plasan had three finalists in the most recent SPE Automotive Awards competition. Those parts were for special effects on sports cars, such as spoilers. The new developments target fundamental car applications.