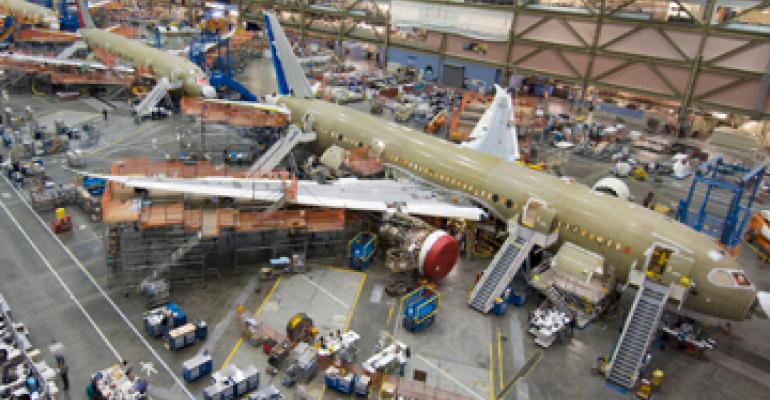 Testing is now being completed on a new titanium alloy that will lighten aircraft frames. ATI 425 offers reduced weight both through improved performance and ability to reduce gauge, according to its developer, Allegheny Technologies Inc. of Pittsburgh.

"Results are better than we anticipated," says Rich Harshman, chief financial officer of ATI. He adds there is significant interest in use of the new alloy, which was originally developed for armor plate on military vehicles. It will be introduced to aerospace markets at the Farnborough Air Show this July in Hampshire, England.

ATI 425 has a lower forming temperature than the material it may replace, 6-4 Ti (Ti-6Al-4V), and is being produced in a modern cold-rolling facility in Louisville, OH.

The newest designs in airframes rely heavily on lightweight materials such as titanium. The materials' content of the Boeing Dreamliner 787, for example, is 15 percent titanium. The amount of titanium used on the Dreamliner increased when titanium fittings were used to strengthen the wing attachment to the fuselage in 2008.

ATI has a strategic long-term supply agreement in place with Boeing, but it's not known if ATI 425 is being used on the Dreamliner.

Development of specialty alloys such as 425 is part of a corporate strategy at ATI to move from commoditized metals such as standard stainless steel to higher value metals, many of which are titanium or nickel based. In recent years, the company has invested $1.3 billion of internally generated funds to renew and expand annual titanium sponge production capabilities to approximately 46 million lbs; expand premium titanium alloy melt and remelt capacity; expand nickel-based alloy and superalloy melt and remelt capacity; expand titanium and specialty alloy plate capacity, and expand premium titanium and nickel-based superalloy forging capacity.

The primary end-market segments for its high-performance metals are aerospace and defense, the chemical process industry, oil and gas, electrical energy and medical. There are only four major airframe producers: Boeing, Airbus S.A.S (an EADS company), Bombardier Aerospace (a division of Bombardier Inc.) and Embraer (Empresa Brasileira de AeronAiutica S.A.).