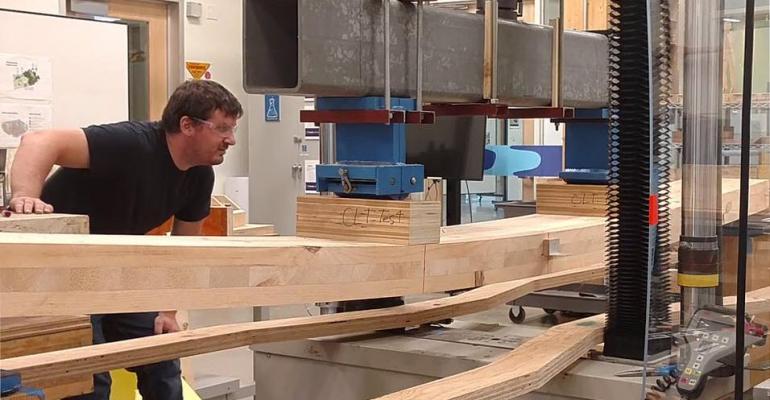 Two new trees grown in the eastern United States have been identified for cross-laminated timber, a sustainable building material.

Researchers have identified two tree species that they think are a good source of wood for a new sustainable type of building material that could promote a more environmentally friendly construction industry.

The eastern hemlock and eastern white pine—two trees found natively in forests of the northeastern United States—potentially have the structural stability to be used as cross-laminated timber, or CLT, researchers at the University of Massachusetts (UMass) Amherst discovered.

CLT is a type of mass timber used for wall, floor, and roof construction that could support better forestry management, one of the strategies scientists are eyeing to address climate change, said Peggi Clouston, a professor of wood mechanics and timber engineering in the university’s School of Earth and Sustainability.

CLT also has key sustainability characteristics that make it more environmentally friendly than concrete, including a much lower carbon footprint.

To identify if the new tree species that could be used to create CLT, Clouston and her research team developed composite building panels comprised of wooden boards from eastern hemlock and eastern white pine trees growing in the region near the university.

Once constructed, researchers tested them for strength to see if they could be used in construction by breaking them in a strength-testing machine.

After analyzing the results bycomparing them to engineering requirements, researchers found that both tree species met building standards, with eastern hemlock outperforming pine in their tests.

Researchers published a paper on their work in the Journal of Materials in Civil Engineering.

Eastern hemlock trees are an especially attractive for use in CLT because their wood is actually considered to be of low value for other industries because of a wood defect called ring shake. “Turning this particular species into CLT turns a very low-value material into a very high-value building product,” she said.

This type o tree also is under attack by an insect called the hemlock wooly adelgid which doesn’t harm the wood but can kill the tree in five to 10 years after infection.

For this reason, salvaging wood from eastern hemlock trees is a priority for forest-management services, especially as it is well-suited to provide low-carbon materials for construction—a burgeoning trend in this industry.

“The testing we did shows that anyone who would want to invest in a local plant has a reason to do so,” Clouston said. “The prospect of being able to use local wood in CLT and manufacture it locally makes it all the more sustainable by avoiding the environmental cost of transporting the material long distances.”