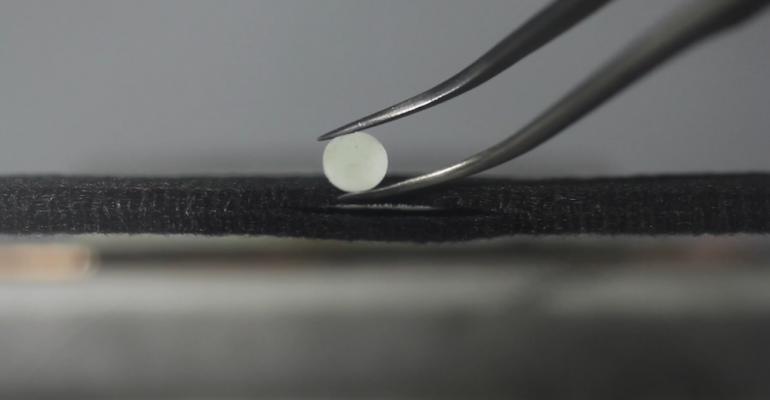 An ultra-fast process developed by University of Maryland researchers is more than 1,000 times faster than typical techniques.

Researchers have developed a way to fabricate ceramics with unprecedented speed that could make these materials more accessible for use in applications such as solid-state batteries, fuel cells, 3D-printing technologies, and more, they said.

A team at the University of Maryland (UMD) has invented a high-temperature sintering method that updates a 26,000-year-old manufacturing process into a more innovative approach to developing modern ceramic materials, researchers said.

The method created by the scientists—led by Liangbing Hu, distinguished professor of materials science and engineering and director of the Center for Materials Innovation at UMD--can create ceramics in less than 10 seconds of total processing time, which is more than 1,000 times faster than the traditional furnace approach to sintering, he said.

To create the materials this quickly, the process uses high heating and high cooling rates, an even temperature distribution, and sintering temperatures of up to 3,000 degrees Celsius, researchers said.

Ceramics are widely used in batteries, electronics, and extreme environments because of their high thermal, mechanical, and chemical stability. However, one drawback is the time it takes to create ceramics, as conventional ceramic sintering techniques require hours—from heating a furnace to several hours to bake the ceramic material.

There are other, faster sintering technologies—such as microwave-assisted sintering, spark plasma sintering, and flash sintering—but each of them have their limitations for a variety of reasons related to materials or cost-effectiveness, researchers said.

To achieve their result, the team sandwiched a pressed green pellet of ceramic precursor powders between two strips of carbon that quickly heated the pellet through radiation and conduction, Hu said. This created a consistent high-temperature environment that forced the ceramic powder to solidify quickly, he said.

“The temperature is high enough to sinter basically any ceramic material,” Hu said in a press statement, adding that the process can be extended to other membranes beyond ceramics.

In addition to using the process to fabricate materials for commercial use, the scientists also hope their process will allow for the use of computational predictions to help materials scientists predict new and improved ceramic materials. Their process now can eliminate the previous barrier to screening new materials before mass producing them, which previously were limited by the long processing times and the poor compositional control from volatile element loss in conventional ceramic sintering techniques, researchers noted in their paper.

The team is currently working to commercialize the process through a UMD spinoff company called HighT-Tech LLC, which focuses on a range of high temperature technologies.