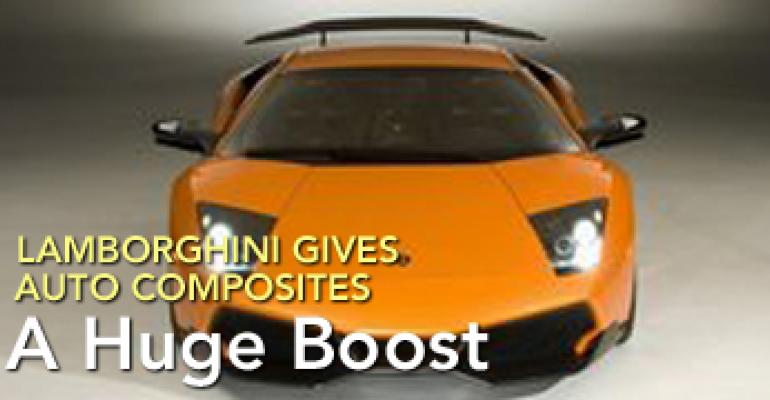 Potential expanded use of carbon fiber composites in cars is taking another step forward with the creation of an advanced composites testing laboratory at the University of Washington in Seattle.

The official name of the facility is the Automobili Lamborghini Advanced Composite Structures Lab.

"This partnership is a win-win situation," says Matthew O'Donnell, dean of the UW's College of Engineering. "It further establishes the Pacific Northwest as a leader in composites research; it funds equipment for a UW engineering lab and it provides students with valuable research experience that's directly tied to real-world applications."

The Seattle area is rapidly becoming an American and global center for carbon composites research and development because of the groundbreaking use of the material in the Boeing 787 Dreamliner.

The University of Washington already operates an engineering certificate program in aircraft composite structural analysis and design. The program was jointly developed by the University of Washington Dept. of Aeronautics and Astronautics and the Boeing Learning, Training and Development group. Instructors include leading professionals from the aircraft industry. Classes are taught at Boeing's Everett, WA location.

The collaboration between UW and Lamborghini goes back two years. UW hosted Lamborghini engineers while UW faculty traveled to Italy to conduct small classes on the fundamentals of composites design and certification.

"Lamborghini remains committed to investing in its future, and advancing carbon fiber composite technologies is the key to achieving many of our goals," says Lamborghini President Stephan Winkelmann.

The new composites lab is headed by Paolo Feraboli, who joined the University's Dept. of Aeronautics and Astronautics in 2005 as Assistant Professor in Aerospace Structures and Materials. Feraboli has also conducted research for Boeing and Toray, the primary composite supplier to the Dreamliner. In addition, he worked on the Dreamliner technology integration group under the direction of Dr. Al Miller.

"Composites are no longer the future, they are the present of structural materials for anything that's high-performance, whether it's aerospace or golf clubs or sports cars," says Feraboli. "Monolithic materials like aluminum just won't cut it anymore."

Equipment for the new lab includes a lightning-strike generator for simulated lightning strikes up to 100,000A; a drop tower for inflicting damage from foreign objects; a pneumatic crash sled capable of crushing full-size vehicle prototypes; and a high-speed video camera that can take 82,000 frames per sec.

One of the big tests for the lab will be its ability to improve the economics of composite parts production for automobiles. Lamborghini is one of the few auto companies to use composites for production parts. In the U.S., design engineers usually only specify composite parts for showy parts on sports cars, such as the adjustable rear wing in the 2008 Chrysler LLC Viper ACR.

Another leading player in developing carbon composites for cars is Plasan Carbon Composites of Bennington, VT.