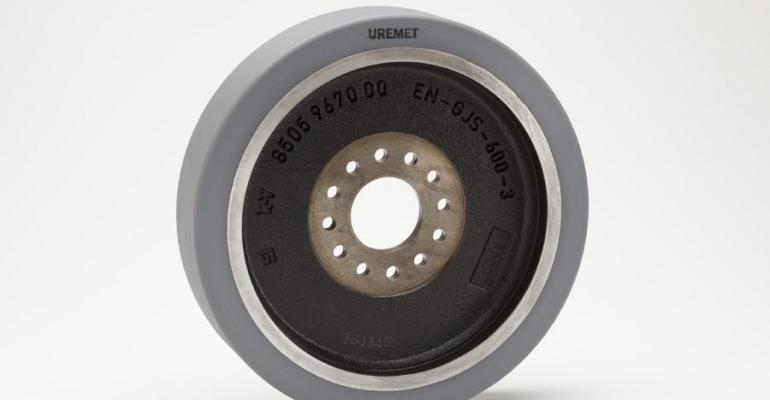 Despite the established physical and dynamic properties of specific materials (rubber, nylon and polyurethane), there are a number of design application issues to consider in generating optimum wheel performance for demanding applications. Many changes can be made to improve performance and extend the usable life of industrial wheels that are experiencing frequent failures (such as dynamic failures known as blowouts, delaminations or fatigue life). Some of these changes include the use of alternative polyurethane chemistries, wheel design changes or even altering manufacturing parameters.

There are many aspects of an industrial application to consider to determine the appropriate wheel design, material and manufacturing parameters to optimize wheel performance. Some of these considerations include:

The following case study describes a solution provided for a major retailer that improved the operating performance of the drive wheels for a large automated materials handling crane located in the company's largest warehouse/distribution facility in the U.S. In this case, the existing solid wheels were constructed from another polyurethane material.

Onsite Evaluation and Testing
Following the initial project review with engineers at the distribution facility, Uremet (a supplier of high-performance polyurethane wheels) conducted an onsite evaluation of the automated materials handling crane system and its drive wheels. In addition to general observations relating to the operating environment and conditions, multiple tests were conducted and data gathered during the initial evaluation, including measuring the operating temperature of the existing wheel treads and the ambient temperature of the facility. Details regarding the load, acceleration, maximum speed, operating cycle, crane weight and wear requirements were noted. The existing wheels were examined for wear, fatigue and delamination.

A general review of the historical operating performance, life span and observed failure modes for the existing wheel tread was also discussed with the facility's engineers and maintenance technicians. The average tread life of the existing wheels was estimated to be less than three months, which caused significant downtime issues for the system. The existing wheel treads typically failed due to either a form of delamination known as bondline fatigue or severe fatigue cracking of the tread material. Bondline fatigue is a failure generally caused by overloading, fatigue or overheating of the bondline resulting in areas of separation between the hub and the tread. Fatigue cracking is a failure typically caused by high-stress concentrations during cyclic loading. In both instances, the vibration induced by these failures was believed to be causing fatigue to the crane frame structure and premature failure of the drivetrain gearboxes. In addition, the existing wheels were only available as new complete wheel assemblies sourced from Europe, resulting in long lead times and high replacement costs.

Analysis/Recommendation
Additional analysis was performed including the examination of the customer supplied wheel samples. The wheel tread material was confirmed to be an NDI/polyester-based polyurethane with a hardness of 96 Shore A. Using the data gathered during the onsite evaluation, the application was analyzed using computer models for targeted deflections, traction, bondline stresses and load capacity based on historical experience and previous testing results from Uremet's application simulation tester. It was determined that the configuration of the existing wheel design was satisfactory and that an adjustment to the formulation of the polyurethane tread would provide enhanced performance.

Uremet's U3000 polyurethane, with a hardness of 78 Shore B, was selected as the optimum tread for this application. Compared to the original material, the U3000 material has a lower compressive modulus, lower hysteresis, higher tensile and tear strengths and a slightly higher coefficient of friction.

The lower compressive modulus of the material results in greater deflection under the operating preload of the system. The increased deflection greatly reduces the bondline fatigue of the wheel system by distributing the stress from the operating loads over a larger area of the bondline. However, the key to the success of the U3000 material is its outstanding dynamic properties, specifically its hysteretic properties which, as measured by tan delta, are approximately 35 percent lower than the original NDI-based polyurethane. Hysteretic properties are effectively a measure of the efficiency of a material in handling high loads and strains. The lower the tan delta of a material, the less heat is generated within the polyurethane during use, and therefore, the higher the load bearing capability of the material. Due to the increased deflection of the material resulting from its lower compressive modulus, the improved dynamic properties are required to prevent dynamic failures within the wheel tread. Another enhanced physical property of the U3000 material is its higher tear strength (in excess of 625pli in ASTM D-1938 testing), which effectively resists the severe fatigue cracking that typically plagues solid elastomeric drive wheels.

Results
Sample wheels with the alternative polyurethane material were manufactured using the customer supplied wheels stripped of their NDI tread and recoated. With the U3000 polyurethane chemistry, the retreaded wheels were installed on the system and have generated significant tangible results, such as: