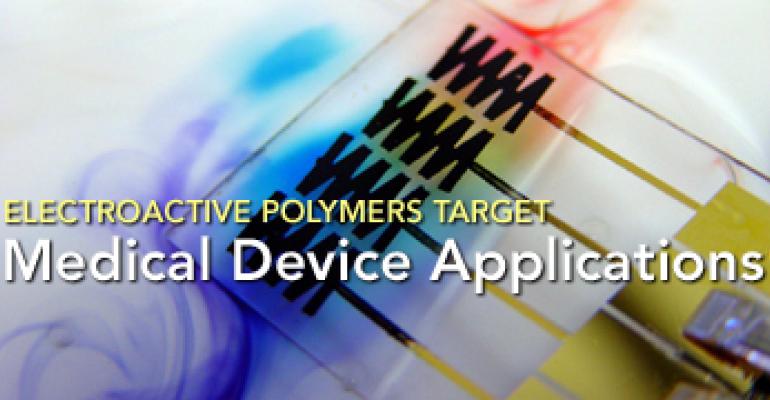 An Irish company is actively investigating potential applications in medical devices for a novel conductive polymer that changes volume and other properties in response to an electrical stimulus.

"In terms of commercial applications of Micromuscle, there are currently no FDA-approved devices incorporating the technology, but there are a number of applications currently being researched," says Maura Leahy, marketing manager for Creganna, a medical device development company based in Galway, Ireland.

The underlying technology is based on electroactive polymers developed by the University of LinkÃ¶ping in Sweden. The polymers swell and contract as ions and water enter the polymer when a small voltage (typically 1-2V) is applied. When the voltage is removed or reversed, the polymer contracts and resumes its original shape.

The bulk volume change of the polymer forms a swelling "volumetric" actuator, in one of the potential uses. In some instances, the polymer may be attached to a metal. An electric current would cause the entire structure to bend.

Creganna recently acquired the patents for the technology from Micromuscle AB of Sweden after the withdrawal of a venture capitalist forced the Swedish company to seek voluntary liquidation.

Micromuscle was founded in 2000 as a spin-off from leading research on conducting polymers at LinkÃ¶ping University. The main shareholders of Micromuscle were Industrifonden, CIMON Medical and Iteksa Venture.

One of the key patents for the technology, "Micro tools", was granted by the U.S. Patent Office on Feb. 19, 2008. The electroactive polymers used by Micromuscle are from the group consisting of pyrrole, aniline, thiophene, para-phenylene, vinylene and phenylene polymer. The discovery of electrically conductive polymers was awarded the Nobel Prize in 2000. Micromuscle is described as the most advanced application of the technology for the medical device arena, particularly for minimally invasive therapies.