HomeMaterialsArtificial Retina Made of Tattooing Inks Could Restore Sight
Recent
Materials
Novel 3D Printing Method Used to Replenish Coral Reefs
May 16, 2022
Volkswagen’s Electric Successor to the International Scout 4x4
May 16, 2022
The Music Is Over For Apple's iPod
May 16, 2022
Q&A With IndyCar Gearbox Expert Anna Chatten
May 13, 2022
POLL
Intel Unveils Trust Authority to Boost Security
May 13, 2022
Supplier News Looks at Highly Customizable Industrial Monitors
May 12, 2022
Here Technologies Maps are Key to Mercedes Level 3 Automation
May 12, 2022
'We Built the Domino's Pizza Tracker for Manufacturing'
May 12, 2022

Artificial Retina Made of Tattooing Inks Could Restore Sight 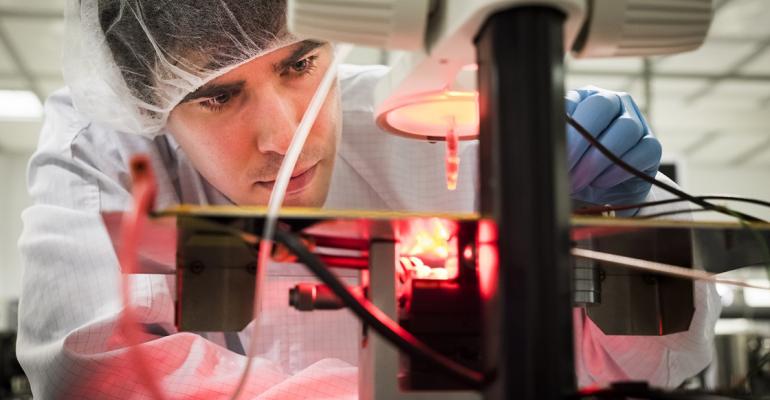 Researchers at Linköping University have used organic inks to create an artificial retina that they hope will help give sight to the blind.

It used to be that blindness was an incurable affliction. But these days, scientists are constantly developing new remedies to help improve and restore sight—even to those with severe damage to their eyes. Now, a collaboration between researchers in Israel, Sweden, Italy, and Austria has resulted in a new solution to a certain type of blindness. Their approach uses a simple retinal prosthesis fabricated using inexpensive organic pigments, which comprise nano-sized pixels.

Led by Eric Glowacki—a principal investigator in the Laboratory of Organic Electronics at Linköping University in Sweden—the team has developed a photoactive film that can be used as artificial retinas. It uses inks that convert impulses into electrical signals. The signals stimulate neurons, or nerve cells, in a way that can restore sight to the blind, researchers said.

Scientists at both Linköping University and Tel Aviv University conducted the research. The Swedish team specializes in nanomaterials and electronic devices; they worked with European collaborators to optimize the technology aspect of the solution. In Israel, researcher Yael Hanin’s group at Tel Aviv University—experts in the interface between electronics and the nervous system—conducted experiments in vision restoration.

The retina of the human eye is composed of several thin layers of cells. Human sight occurs because light-sensitive neurons in the back of the eye convert incident light to electric signals, while other cells process the nerve impulses and transmit them onward along the optic nerve to an area of the brain known as the visual cortex. If someone loses their sight due to degradation of light-sensitive cells—which means they stop converting light into electrical pulses—an artificial retina like the one the team developed can be implanted by surgery to help restore sight.

The device is essentially a thin circular film of photoactive material similar to an individual pixel in a digital camera sensor. Each pixel—comprising a pigment of semi-conducting nanocrystals—is about 100 times thinner than a single cell and has a diameter smaller than the diameter of a human hair.

Glowacki described the artificial retina as a “microscopic doughnut,” with the crystal-containing pigment in the middle and a tiny metal ring around it. No external connectors are needed for the retina to function. Nor is there a delay in nerve-cell activation once implanted, he said.

“We have optimized the photoactive film for near-infrared light, since biological tissues—such as bone, blood, and skin—are most transparent at these wavelengths,” Glowacki explained. The pigments used in the material are non-toxic and inexpensive, and already widely commercially used in cosmetics and tattooing ink, researchers said.

Researchers already have proven their device can be used to stimulate not only neurons in the brain but also neurons in non-functioning retinas, they said. The team plans to continue to optimize the device for further test and future clinical use.

The team published a paper on their work in the journal Advanced Materials.